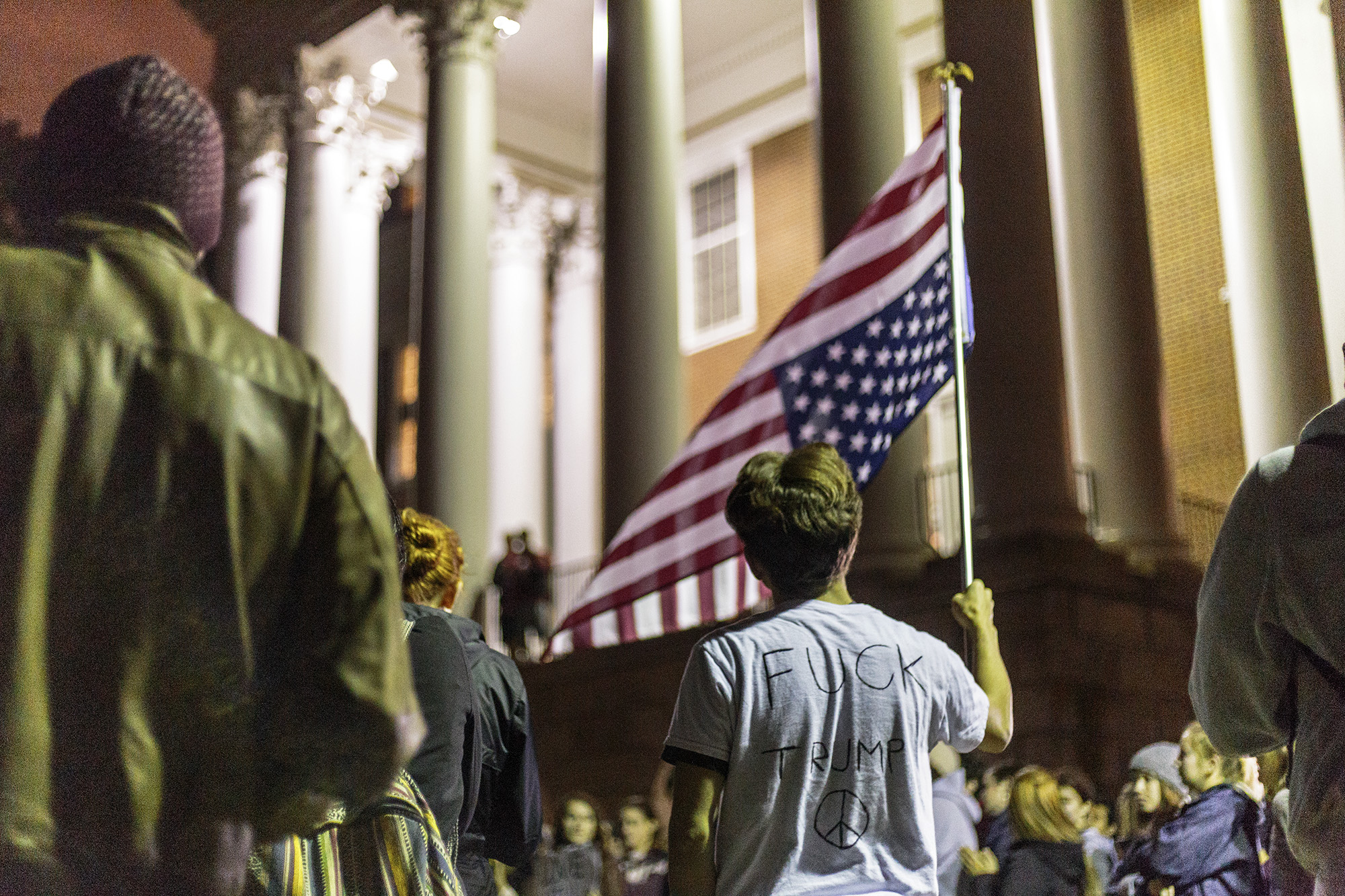 Senior English major Aiyah Sibay didn’t vote for Donald Trump. But she told her grandmother, a Syrian immigrant living in America, that she hoped Trump would be elected president, because that’s what would wake people up to Islamophobia in the U.S.

“Sometimes being afraid is necessary to have these kind of movements,” Sibay said. “… Why does it take this terrifying man to bring us together against these injustices?”

At least 300 University of Maryland students gathered in front of McKeldin Library on Wednesday night for UMD United After the Election to support students and marginalized communities who felt affected by Trump’s victory over Hillary Clinton in Tuesday’s presidential election.

“I would love for you to share what you’re feeling, and your experiences if you’re comfortable,” said Meredith Lightstone, a senior government and politics major and Terps For Hillary president, when she began the dialogue.

Lightstone, who organized the event on Facebook, added that if members of the crowd were not courteous and tolerant, she would ask them to leave.

Within the first half hour, students who spoke individually with the megaphone in front of the library broached the topics of racism, sexism, xenophobia and discrimination toward LGBT groups that Trump has targeted through his rhetoric since the beginning of his presidential campaign.

“I absolutely love my school, and this is what America is,” said Kelsee Whaley, a sophomore geographical sciences major who spoke to the crowd. “I don’t care what the fuck that election says. This is America right here.”

As an African-American woman, Whaley said she’s upset over the election’s outcome.

An overarching theme of positivity reverberated throughout the event as students expressed support for minority groups feeling targeted by the president-elect. It rang true with Whaley, who said she’s “down to help anybody who’s been [oppressed].”

Sobia Ahmad, a 2016 alumna who spoke at the event, said Trump’s win allows people to express their racist and prejudiced thinking, because now “people have a leader to follow who not only openly marginalizes people, but also takes pride in that.”

One student held a sign through the event that read “love will always trump hate,” and one student held a sign with the bolded letters, “FUCK TRUMP.” Another, who wore a shirt that read “Fuck Trump” with a peace sign drawn underneath it, held an American flag upside down to represent the distress he said the U.S. is in as a result of the election.

At one point, disruptors who were not initially at the event grabbed the flag, causing a brief scene. A few students walking past also yelled, “Build the wall!” at the group, and a few others sporadically shouted supportive statements of Trump from the library balcony.

“These people who think that free speech is such an important thing don’t respect it when they don’t agree with it, and that’s really concerning,” Lightstone said after the event. She added that she hopes those involved can have a safer space moving forward.

Netochukwu Obichere, a freshman biology major who spoke after this exchange, said it was a relief for him to see so many people like him who were against Trump, “and moreover, things like racism, sexism, disenfranchisement of minority groups.”

When Obichere spoke, he said he focused on letting white people know that they can make a difference.

“It’s not only up to the minority groups in the United States to be the focus of progression and change,” Obichere said.

Lightstone announced to event attendees that she’s working on a platform to present to this university that would protect undocumented students, provide sexual assault resources and supply funding for the multicultural center.

She made a survey for students to provide input for any ideas they feel should be included in the platform. It’s posted on a Facebook group she created, UMD United Against Hate.