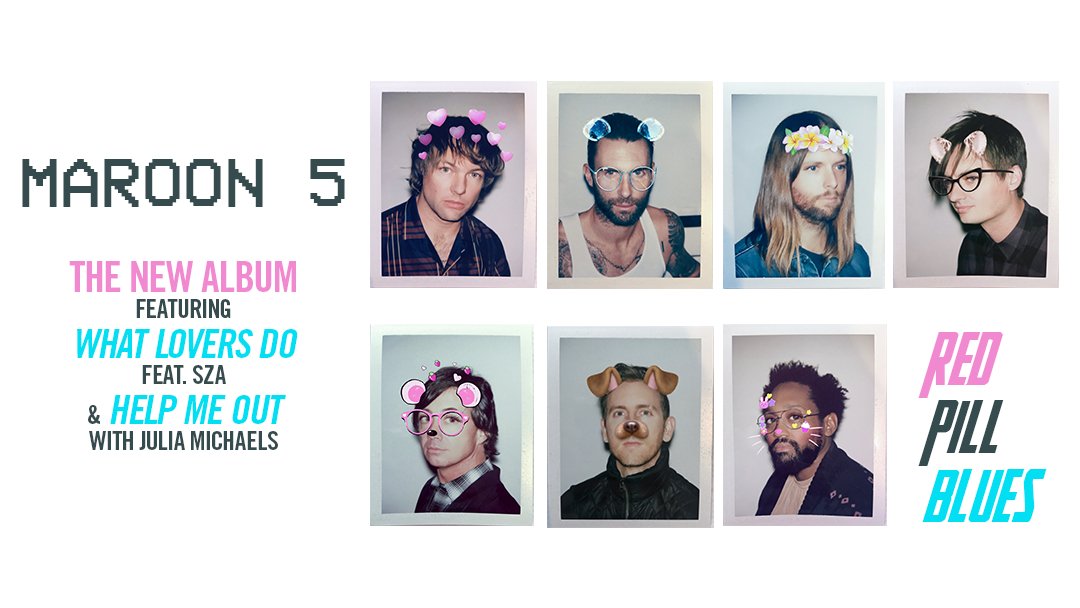 Maroon 5 wants to be relevant.

On the cover of Red Pill Blues, Maroon 5’s sixth studio album, all seven members of the group boast different Snapchat face filters (Also, Maroon 5 being a seven-person band is incredibly distracting). With dog ears and flower tiaras on their heads and features from Kendrick Lamar, SZA, Future and A$AP Rocky on their tracklist, Adam Levine and the gang’s latest project is a nice-sounding but forgettable sign of the times.

The aforementioned features from the rap world are meant to be an enticing draw to the 15-track album, which runs for slightly more than an hour. At a time when hip-hop is billboard-chart royalty, the obvious next step for pop bands like Maroon 5 is attempting to blend America’s most popular genre into their sound. On “Whiskey,” featuring A$AP Rocky, Maroon 5 nails it by bringing in the Mob leader to flow over an ambient instrumental right in his wheelhouse.

“Punch-drunk love, it’s a fine line,” says Rocky as he compliments the recipient of his affection. “Dom Pérignon, she the fine wine.”

Outside of Rocky, however, the hip-hop features feel like forced attempts to benefit from the zeitgeist of 2017. SZA is essentially relegated to the role of vocally gifted hypewoman on “What Lovers Do,” as Top Dawg Entertainment’s breakout star is sonically buried within Adam Levine duets. Future is by far the most enjoyable part of “Cold,” and he’s in the song for about 30 seconds. “Don’t Wanna Know,” the album’s most recognizable, stick-in-your-head-type track, gives Kendrick Lamar just eight bars as if only to say, “Look, we have a Kendrick feature!”

“No more, ‘Please stop,'” instructs Lamar with sentiments similar to his own “Humble.” “No more hashtag boo’d up screenshots.”

Despite the relatively failed hip-hop partnership, Red Pill Blues does possess noteworthy moments headlined by the gorgeous vocals of Adam Levine. On “Denim Jacket,” the band’s frontman hits peaks that would provide the perfect soundtrack to a dancing-through-rainbows-and-waterfalls movie scene. “Lips On You,”, the album’s sexual fourth track, is Levine at his most seductive.

“When I put my lips on you,” croons Levine in a way that is basically impossible not to be attracted to, “you feel the shivers go up and down your spine for me.”

As hip-hop and pop become increasingly synonymous with the former’s rise to the top of the charts, it’ll be some time until the sound is perfected. On Red Pills Blue, Maroon 5’s attempt at cohesion comes up completely asymmetric.