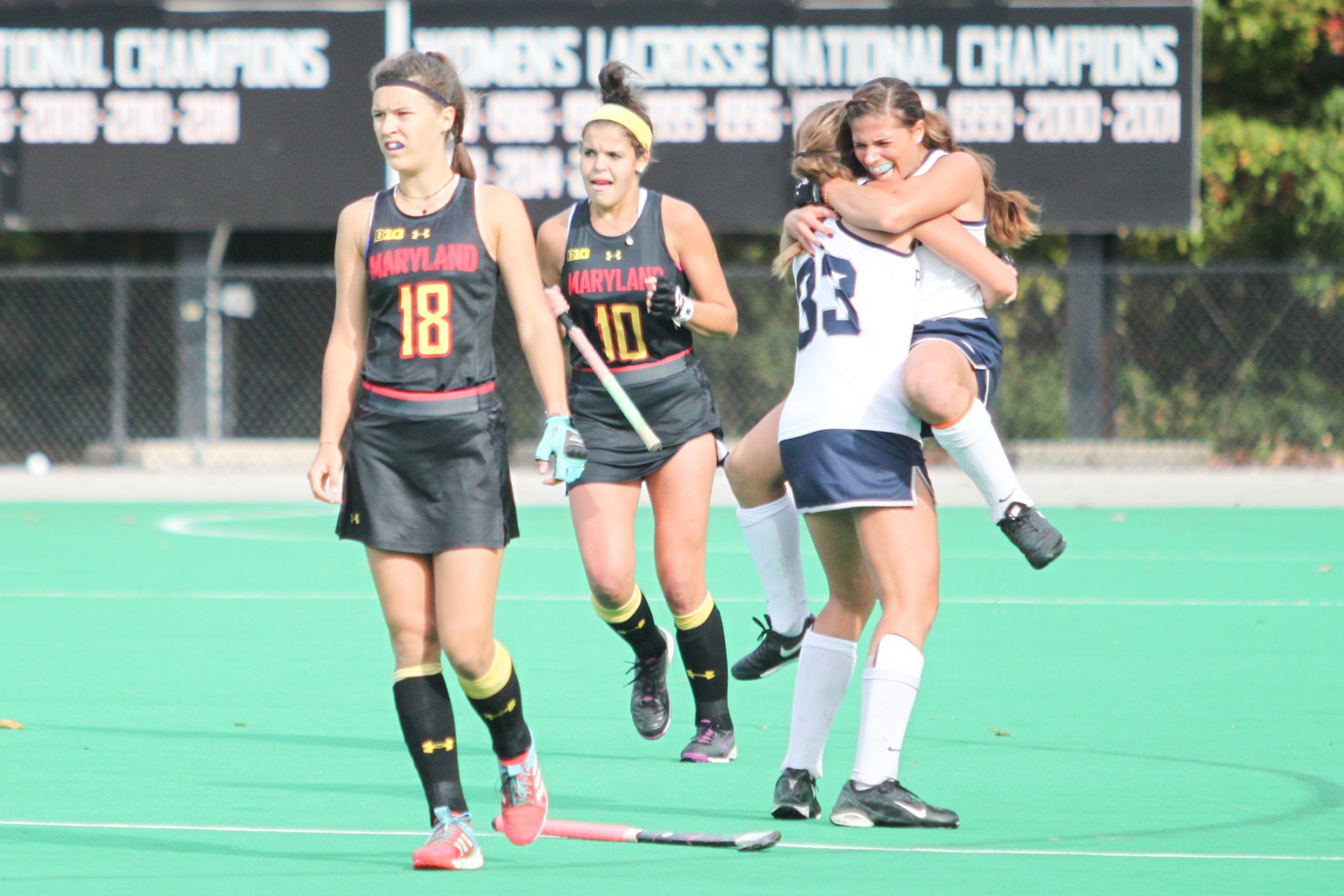 Her voice was shaky as she gave an answer about the 2-1 loss the Terps had just suffered to Penn State in the title game of the Big Ten tournament. Her eyes grew more and more glassy as she spoke.

But coach Missy Meharg knew how she could lift the spirits of her senior captain. After Luus gave a brief response, Meharg tapped Luus on the side and pointed up at the television hanging in the corner just behind her shoulder.

The TV showed the ACC title game; one of several games across the country over the weekend that determined who would receive the NCAA tournament’s top-four seeds later that night.

Many of those results helped the Terps, who ended up with the No. 2 seed and will host the first two rounds this weekend.

“We know there’s a lot ahead of us,” Luus said.

At the time of the press conference, Virginia was beating North Carolina, a scoreline that bode well for the Terps earning one of the four host spots. The Cavaliers held on, and Maryland received the news it was hoping for before it went to bed Sunday.

After losing to Penn State, that result didn’t seem so certain. Though Duke and Syracuse, the two teams ranked ahead of Maryland heading into the weekend, lost early in the ACC Tournament, they also owned head-to-head wins over the Terps.

So if the Tar Heels, who entered the weekend No. 5, won the ACC championship game against Virginia, it seemed they could have taken Maryland’s potential host spot. Instead, Maryland leapfrogged Syracuse to snag the second seed. Penn State, meanwhile, earned the final hosting spot after winning the Big Ten championship.

But as the clock ticked down Sunday and the Terps took their first loss in more than a month, the possible postseason scenarios weren’t on their minds.

The team wasn’t happy with its inconsistency, as it failed to create sustained offense against Penn State’s pressure. Forward Emma Rissinger scored in the 26th minute, but the Terps went scoreless after that.

“It’s just that vibrant understanding that you just got to play every single possession with a sense of intellectual hockey,” Meharg said, “and I think we did that much better at times than others.”

Despite replacing goalkeeper Sarah Bates with Sarah Holliday early in the second half, Meharg was pleased with her team’s defense performance. On the other end of the field, the Terps had success getting the ball into Penn State’s circle. They just couldn’t take advantage of those chances.

The 29th-year coach said that was due to the team using the wrong strategy down the baseline, especially late in the game while playing with a two-player advantage because of an empty net and a Penn State yellow card.

“As the women debriefed in here right after the game … they said, ‘Boy, let’s play smarter at that point,'” Meharg said. “When you’ve got them on the baseline, then you’ve got to pull it right back to the top. It’s like basketball: Bump it out and take the shot.”

After suffering their first loss since Sept. 25, the Terps will look to bounce back when they play the winner of Monmouth and Massachusetts on Saturday.

“I know how quickly I can move on, I’ve been doing it a long time,” Meharg said. “We’re a very, very strong, spiritual team. We believe in each other. We will move forward.”