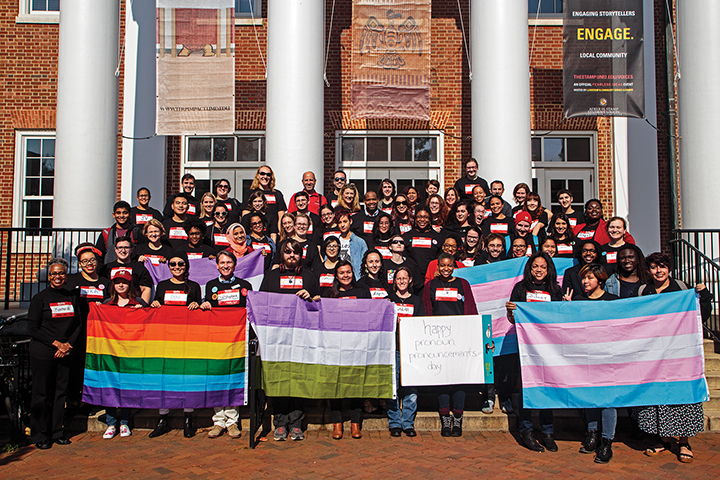 Students and faculty gather on the steps of Stamp Student Union wearing shirts that display each individuals' proper pronouns. The group met as a part of Rise Above Week to discuss gender and trans inclusion on campus. (Tom Hausman/The Diamondback)

As a transgender man, Max Balagtas-Badoy has been misgendered for a big part of his life.

“I went to an all-girls school for nine years, which meant that I got misgendered every day for nine years,” the senior philosophy and psychology major said.

And it didn’t stop there. Though he prefers “he” and “him” pronouns, he gets misgendered about 40 to 50 times a day just because “I don’t always put effort into presenting [myself as] masculine,” he said.

This year, Balagtas-Badoy led Pronouns Pronouncement Day, a campus-wide event on Wednesday that encouraged students, faculty and staff to display their pronouns on buttons, t-shirts and labels. The event also featured a table in Stamp Student Union to educate the campus community about the importance of considering pronouns.

“When any trans or gender non-conforming person is misgendered, that kind of strips away the meaning from all the effort and emotion and energy they’ve put into constructing this identity for themselves,” Balagtas-Badoy said. “The ideal result of Pronouns Pronouncement Day would be for more students on campus to have a familiarity around practices around pronouns, like, ‘Why is it important to introduce myself with pronouns and ask for people’s pronouns?'”

The event was part of the University of Maryland’s fourth annual Rise Above “-isms” week, sponsored by the Office of Diversity and Inclusion, which provides opportunities for dialogue surrounding ending oppression and injustice, according to the office’s website. Balagtas-Badoy is a Community Organizing Student intern for the Office of Multicultural Involvement and Cultural Advocacy, a unit within Stamp and the Division of Student Affairs that aims to empower students through education on various issues such as gender identity, according to the Stamp website.

Beth Douthirt Cohen, the director of education and training in the Office of Diversity and Inclusion, said Pronouns Pronouncement Day was about having one-on-one interactions to share knowledge and experiences surrounding pronouns and misgendering.

“Today is the opportunity to have individualized conversations with people,” Douthirt Cohen said. “It’s an important diversity concept — you tell me who you are; I don’t tell you who you are.”

Douthirt Cohen said the Pronouns Day committee received about 400 T-shirt requests — they only had about 200 to give — and she was pleased with the turnout.

The three-hour-long event ended with a group photo of participants wearing their shirts outside of Stamp. Jade Olson, director of the Oral Communication Center and a doctoral student at this university, said she participated because she saw a benefit to discussing the topic.

“It’s really important for us to have a conversation about pronouns and gender and equity,” she said.

Balagtas-Badoy said he has also reached out to this university’s Writing Center to propose that it endorses more writing lectures on the campus about the validity of singular “they”/”them” pronouns in academic writing.