Maryland men’s basketball overcomes a slow first half to down Illinois, 62-56 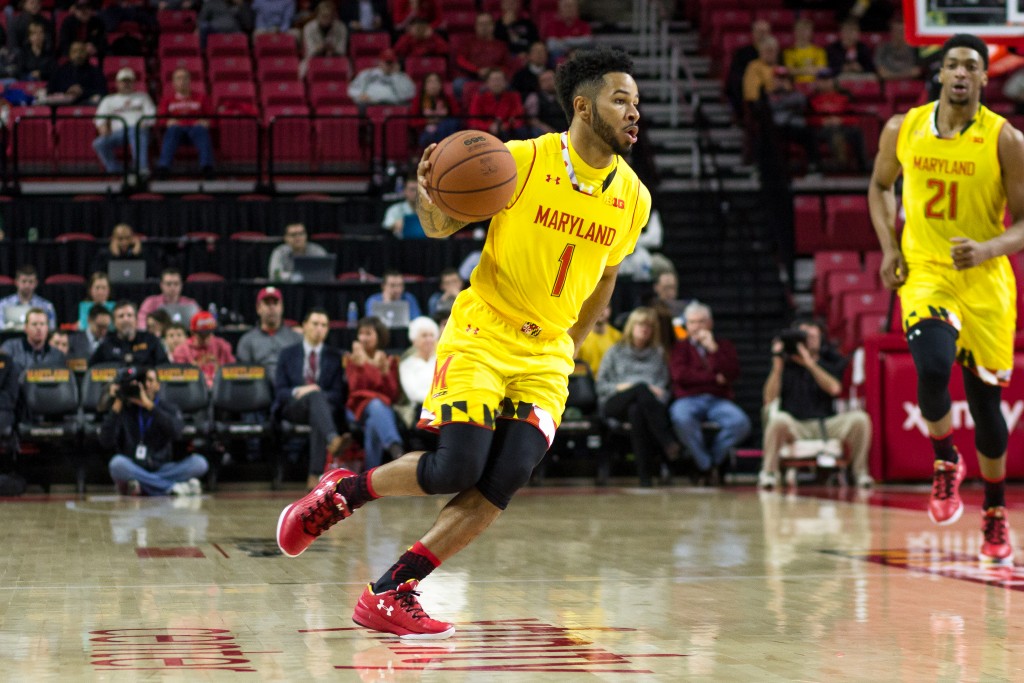 The Fighting Illini, a team Maryland destroyed, 84-59, on Dec. 27 to start Big Ten play, held a 27-16 lead at the State Farm Center. The Terps offense that shot over 50 percent and scored 48 points in the paint in the first meeting was settling for perimeter jumpers and wasn’t making them, either.

As the Fighting Illini extended its lead to six in the opening minutes of the second half, Turgeon’s frustration grew. Guard Melo Trimble was open in transition just before the under-16 media timeout, but guard Kevin Huerter threw an errant pass. The play resulted in a turnover and Turgeon slamming his first down on his whiteboard before bringing his team into the huddle.

Yet after the game, Turgeon sat at the podium and was calm as he spoke about Maryland’s early struggles. The Terps had overcome them in their 62-56 victory. Reserve guard Jaylen Brantley’s 12 second-half points, paired with Illinois’ almost eight-minute scoring drought, changed the complexion of Maryland’s fourth Big Ten win in five tries.

“Just a gutty win,” Turgeon said. “It wasn’t a pretty game at all. Neither team could really make a shot. It was two really good defensive teams, and Jaylen, we just kind of rode Jaylen in the second half.”

Brantley averaged 5.1 points per game entering Saturday but scored 12 against the Fighting Illini, two shy of his career high. Trimble also had 12 points despite another poor shooting performance in which he made 5 of his 16 attempts, while Cowan added a team-high 19 points.

Each made valuable contributions as the Terps swung the momentum in their favor in the second half.

At the 13:38 mark of the period, forward Michael Finke’s layup gave Illinois (12-6, 2-3 Big Ten) a 43-39 lead. But then the Fighting Illini started shooting from the perimeter, and it wasn’t rebounding the misses. The Terps also began effectively doubling the post players, forcing them to make sloppy passes. By the time Illinois scored next — center Maverick Morgan had a tip in with 5:45 to play — it was in an eight-point hole.

“I’m a big believer in that basketball is a game of runs, so we just had a big run, and it was at a good time,” Cowan said. “Jaylen had a big run by himself.”

Illinois’ misses led to long rebounds and more transition opportunities, and Maryland (16-2, 4-1) took advantage by scoring 14 points in that span, nine from Brantley, to quiet a once-raucous blue-and-orange crowd.

“[Jaylen] really changed the game in the second half,” Trimble said.

Brantley entered the break scoreless after missing two 3-pointers, an area the Terps struggled with as a team in the first half. As they’ve done at times throughout the season, they settled for perimeter jumpers. Trimble started the game with a triple, but he missed his next four, all of which came in the opening minutes. At the first media timeout, six of Maryland’s nine shots came from beyond the arc.

A lack of post scoring came from Maryland using a small lineup. The Terps were without 7-foot-1 forward Michal Cekovsky (ankle) for a fifth straight game. Their starting frontcourt of forwards Damonte Dodd and Justin Jackson each picked up two early fouls and combined to play 12 first-half minutes.

Turgeon even put 6-foot-7, 205-pound guard Jared Nickens at the four and forward L.G. Gill at the center spot.

“We were just trying to survive the half, and I threw Kevin Huerter there at the four, and we can’t run any plays,” Turgeon said. “We were just totally out of sync.”

Facing a nine-point deficit with 18 seconds left in the half, Cowan made a pair of free throws and Trimble made a steal and finished a layup as the final buzzer sounded. Turgeon said he felt great entering intermission. Jackson and Dodd returned in the second half, allowing the coach to implement his usual rotation and style.

The result was a game-changing stretch, featuring suffocating defense and an offensive spark off the bench that allowed the Terps to improve to 6-0 away from Xfinity Center.

“Our defense was terrific,” Turgeon said. “And then Jaylen Brantley really gave us a huge lift, gave us confidence, cause really no one could make a shot for us except him … and he made a lot.”