SGA president to UMD administrators: “We need more from you” to address race relations 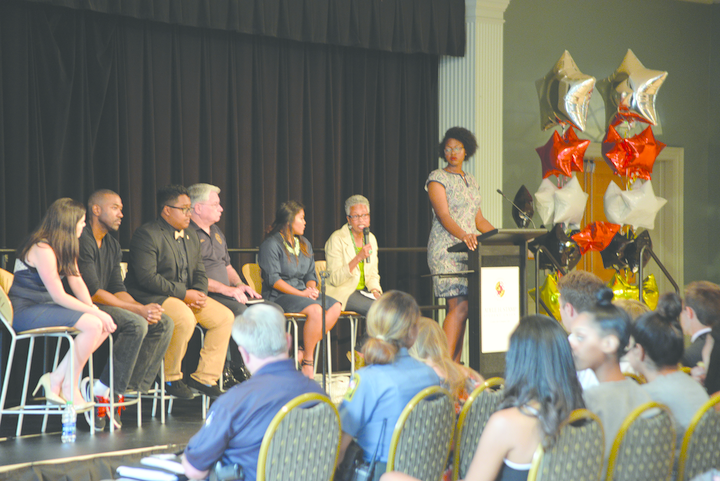 Months after University of Maryland Police used pepper spray to disperse a graduation party with predominantly black students at Courtyards on May 21, Sydney Parker still wonders why such incidents happen.

“Why did [the police officers] feel threatened in the first place?” the junior communication major asked a six-member panel on Wednesday night.

More than 100 students, faculty and staff attended a tense, but conversational town hall in Stamp Student Union’s Colony Ballroom to hear panelists discuss the incident and how to tackle race relations within the community. About 10 people in attendance participated in the about 45-minute question-and-answer session that followed the panel.

In addressing police relations, Mitchell said a recurring problem is the lack of community understanding about officers’ roles.

“Police officers in their daily context are not explaining why they’re there and why they’re doing what they’re doing,” he said. “It is imperative for us to be straightforward, transparent and open and honest in our dialogue.”

Mitchell also admitted the pepper spray incident shouldn’t have gone as far as it did, adding that policies surrounding the incident need to be reviewed. Investigation results released in mid-July found that deployments of pepper spray fell within UMPD use of force guidelines.

“We have good cops that sometimes make bad choices … just like anybody else does,” he said. “Sometimes it’s up to us in leadership to decide what the punishment should be.”

One question asked to the panelists was whether they feel the campus is divided.

“It all comes down to institutional changes,” said Jason Nichols, an African-American studies professor. “You here at UMD, in my opinion, have really great leadership, and that’s why we have 60,000 calls and [only] 17 complaints.”

A large part of coming together as a campus is engaging incoming students on the matter so they can lay the groundwork for future activism, said Johanna DeGuzman, former SGA director of diversity and inclusion. The SGA recently established a police advisory board, which first met in April, to help encourage conversation between students and police.

While the onus is largely on the student body to incite change, SGA President Katherine Swanson said she would like to see more commitment on the administration’s behalf as well to create a more cohesive environment in the future.

“I’m really looking for a commitment from those who are going to be here longer than four years, because we can’t do it without you,” Swanson said. “We need more from you than what we can give ourselves.”

Shorter-Gooden said she agreed with Swanson that faculty and staff need to do more.

“Administrators, faculty and staff have responsibility to carry these issues forward,” she said.

“We need to be constantly nudged and pushed by you, but [faculty] have responsibility,” she said. “We need to make some of these changes and engage the entire force.”

At the end of the panel discussion, Huff emphasized to not let the discussion stay in the room but to make sure to keep the discussions alive outside of this setting.

“Say it to your friends, spread it around the world and around campus,” he said.