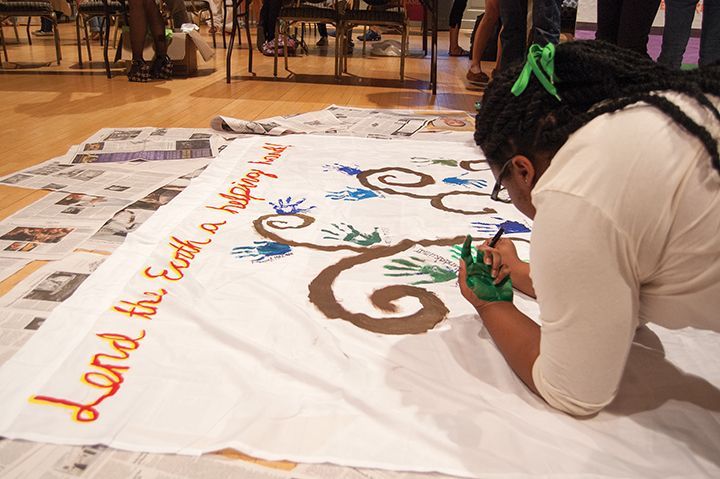 The University of Maryland is home to numerous sustainability-focused student groups. Now, more than 20 of them are connected under one central body.

The Sustainability Cooperative — which began this semester after being spearheaded by this university’s chapter of the American Ecological Engineering Society — aims to serve as a communications forum for interaction and collaboration between student environmental clubs, said Amelia Avis, one of SCoop’s organizers.

In the past, different sustainability groups have had problems with hosting original events and often found their efforts redundant, said Avis, a senior government and politics major.

“There were multiple stream clean-ups all happening within the same location, on the same day of the same weekend, with a bunch of different clubs,” said sophomore environmental science and technology major and SCoop Outreach Chair Meagan Collins.

After members of several sustainability clubs realized the need for greater networking and communication at the American Ecological Engineering Society Fall Bash, they created SCoop. Although the event began as a social gathering, students in attendance began discussing the need for greater communication between their various clubs, said SCoop Administrative Chair Annabelle Arnold.

“We had this idea to invite as many student [organizations] as we could — I think we ended up inviting 12 or 13 — and it turned into a networking event,” the junior environmental science and technology major said. “We realized that it would be more beneficial to work as a unit than as individuals.”

Besides ensuring that events and initiatives don’t overlap, the cooperative allows the groups to draw from resources and support outside of their organization, including gaining more publicity for their events.

To encourage students to get involved, SCoop hosts weekly phone calls and monthly in-person meetings that are open to anyone in the cooperative. Students can also sync their personal Google calendars with SCoop’s publicly shared calendar, giving them access to wide range of scheduled sustainability meetings and events, Avis said.

“It crosses over so many majors and colleges because of all of the different groups that have environmental focuses,” said Maya Zambrano-Lee, a junior environmental science and policy major and one of SCoop’s founders. “If you want to publicize an event or project that you’re working on, it allows more people to know about it and get involved.”

The cooperative can also help unify other groups and create a stronger coalition, which can be helpful when applying for grant funding or signing petitions about environmental projects, Zambrano-Lee said.

“We thought it would be more effective and powerful to build partnerships in those efforts and to make sure that people are collaborating, building support as a coalition for their projects,” Avis said.

Avis said the expanded event is a way of bringing the various groups together and highlighting the importance of environmental issues.

“I think we’ve come to point on campus where people consider sustainability to be checked off on a list,” she said. “It’s something that every academic department thinks is finished and done for them and they’ve accomplished all they can do, but we’re trying to make it known that sustainability really means sustained progress and improvements.”