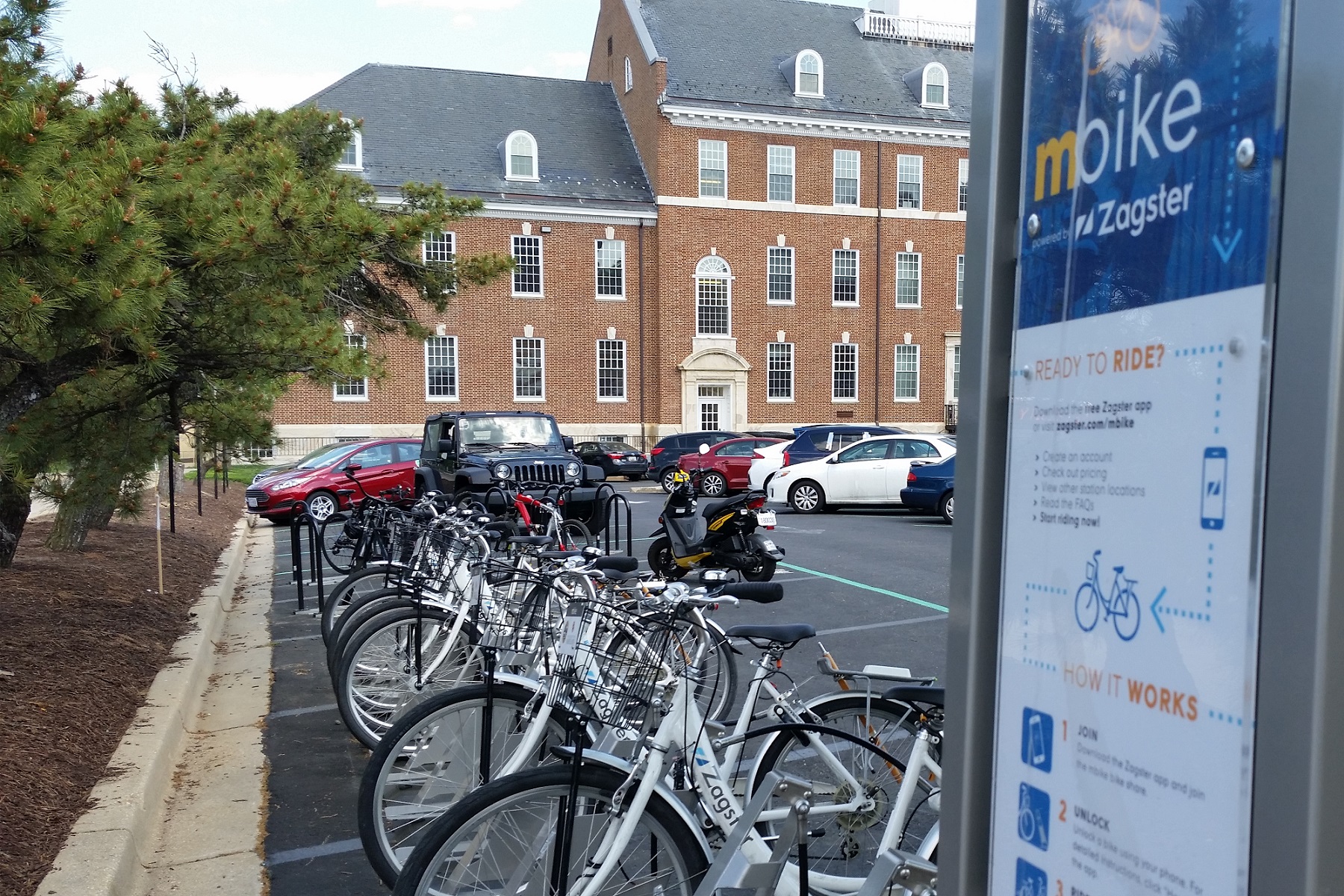 Bikes for the mBike program sit in racks in Lot HH. (Ryan Romano/For The Diamondback)

The College Park City Council plans to make its mBike bike-share program dockless in May — and it’s considering launching a dockless scooter program, too.

With the city’s three-year contract with Zagster, a Massachusetts-based bike-sharing company, set to end in May, the council authorized staff at a Tuesday work session to finalize a new contract — one that wouldn’t require residents to return bikes to a fixed home location.

“The more that people are willing to bike, scooter or walk around and can do so safely, the more beneficial that is as opposed to getting into a car,” Mayor Patrick Wojahn said.

Currently, riders must park the bikes at designated Zagster stations. Under the new dockless program, riders would have a choice between dropping the bikes at one of these stations or any public bike rack — but they would face a $2 fine if they failed to do so.

“For a public program, we think it’s important that it be clear where you can end your ride, so we don’t have bike clutter and bikes all over the place where they’re difficult to find,” said city planning director Terry Schum.

[Read more: A year after its launch, College Park’s bike-share program will expand to University Park]

The new system is tentatively set to start the week of May 19, according to city documents.

The current mBike system has been “really successful,” with 24 stations throughout College Park, Schum said. The stations circulate nearly 200 bikes, which average more than 800 trips per week, she added.

With the new contract, membership would cost $60 annually and $30 for students. However, only the first half-hour ride would be free. And beyond that, the rate per ride would go up from $3 per hour to $4.

College Park implemented the bike-share program with a state grant and receives a portion of the money Zagster makes from the program, which it uses to build more stations. Under the new contract, Zagster would seek sponsorships from private companies to fund the program.

While this would mean the program would come at no additional cost to the city, College Park would lose $14,500 in annual revenue — though the fiscal impact would be “minimal,” according to city documents.

The council also discussed launching a pilot program for a scooter ride-share, after the University of Maryland’s Department of Transportation Services was contacted by several scooter companies.

“We know that students really like the idea, and there seems to be demand on the College Park campus to introduce scooters,” Schum said.

The idea found support at a Residence Hall Association meeting in November. The body passed a resolution in favor of DOTS bringing electric scooters to the campus — specifically from a California-based company named Bird.

While College Park is weighing a contract with Zagster for a scooter-sharing program, it may partner with another company, according to city documents.

Though scooter programs have taken hold in major cities such as Washington, D.C., and Baltimore in the last year, Schum recommended the city proceed with caution.

“We know they’re popular, but because they’re popular, they’re have been safety concerns raised,” she said. “There’s been some high-profile accidents and lawsuits regarding scooters, so for all those reasons, we wanted to go a little slowly.”

Schum helped lay out a number of recommendations for potential safety guidelines, such as setting an age limit and putting caps on speed.

DOTS executive director David Allen added that the company would provide anyone who downloads the scooter-share app a free helmet, available for pickup at a city or university office. He also suggested setting aside a section of a parking lot where inexperienced students could practice using the scooters.

“I have some greater anxiety about this particular business model than I do about the bikeshare,” said Rigg, who represents District 3. “Scooters, I believe, are a lot more dangerous than bikes, because you have people who are less experienced with them — many of us have been riding our bikes our entire lives.”

Rigg especially expressed worry about scooter usage by inebriated college students on game days and on busy roads like Route 1.

“Probably the most unsafe thing I do during the day is get inside my car and drive on the road,” Kennedy said. “I think we tend to — when we have something new — to get concerned about safety, and I wonder what the actual risks and safety factor is, compared to something we’re really familiar with.”