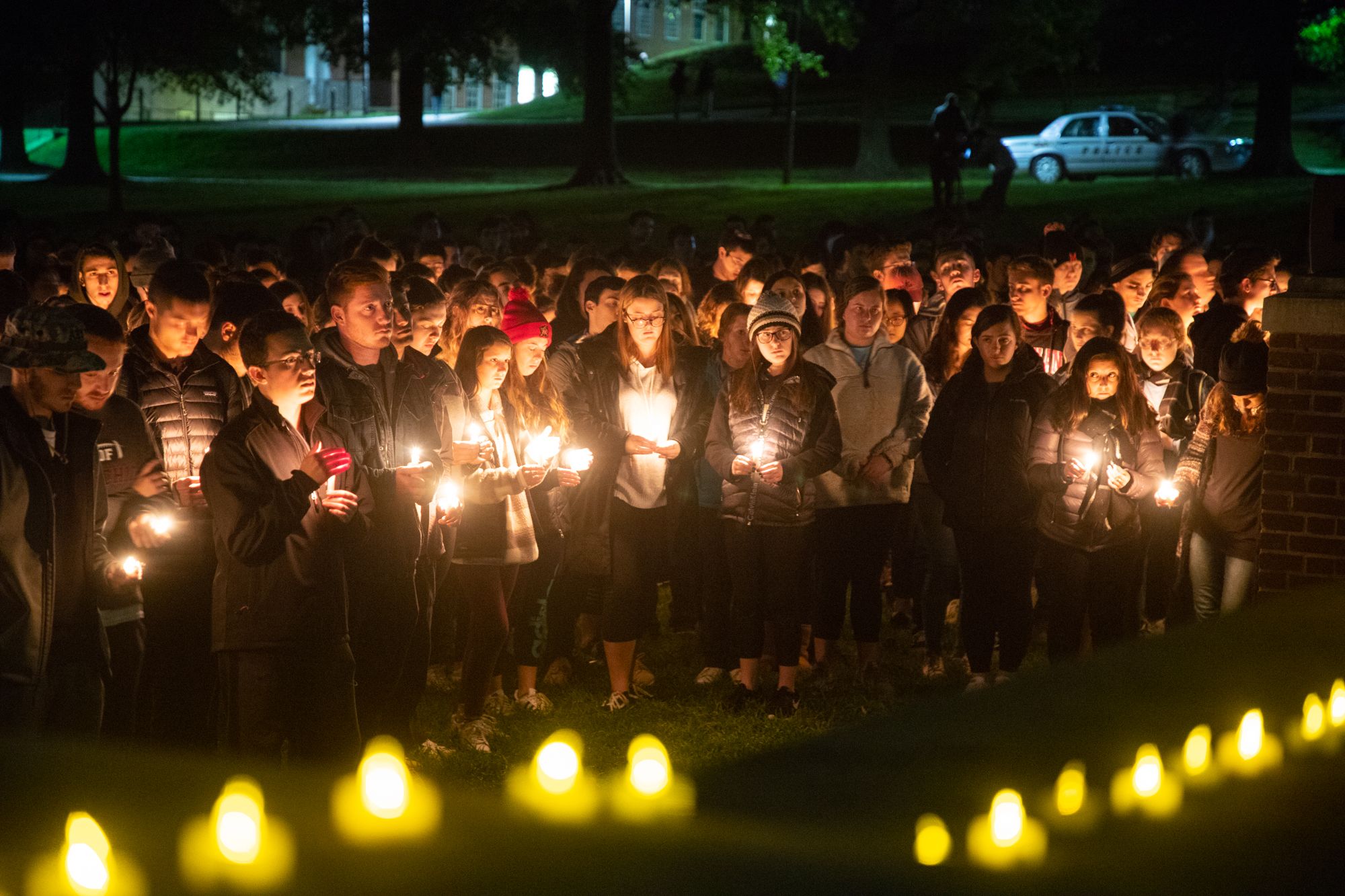 Maryland Hilell held a vigil for the victims of the Tree of Life Synagogue shooting in Pittsburgh this past Saturday. The vigil was held on Mckeldin Mall with speakers from Maryland Hilell and Pittsburgh natives. (Evan Kramer/The Diamondback)

That’s how MJ Kurs-Lasky, University of Maryland Hillel’s student life director, described it. Growing up, he would worship at a small synagogue in the Squirrel Hill area — the same synagogue where a gunman opened fire during Shabbat morning services over the weekend, killing 11 and injuring six.

On Monday evening, candlelight illuminated hundreds of faces on McKeldin Mall as students and religious leaders gathered to mourn the bloodshed at the Tree of Life synagogue in a Hillel-organized vigil.

Squirrel Hill was the hometown of Fred Rogers, star of the long-running children’s television show Mister Rogers’ Neighborhood. With that in mind, Kurs-Lasky asked those in attendance to “make our quaint, tree-lined campus feel like a neighborhood.”

The attack on Tree of Life is believed to be the deadliest attack on the Jewish community in the history of the United States, the Anti-Defamation League wrote in a statement.

The shooting is part of a historic spike in anti-Semitic incidents in this country. The ADL reported that such incidents increased by 57 percent from 2016 to 2017, the largest single-year increase on record.

This university has not been spared from the rising tide of anti-Semitism. Since the beginning of the academic year, swastikas have been found drawn on a whiteboard in a dorm and the bathroom stall wall of an academic building on the campus, according to the Office of Diversity and Inclusion’s hate bias incident log. About one in five undergraduates at this university is Jewish, according to the Hillel International College Guide.

Throughout the vigil, Hillel educators and religious leaders, such as Rabbi Eli Backman, addressed the crowd. Backman, who leads the Jewish student organization Chabad, told the group that the night’s gathering stood as a chance for them to “build a larger flame to push away the dark and the cold.”

“Join with a neighbor, light your own candle, intertwine with others and together, we’ll make a difference in the world,” Backman said.

Robert Bowers, 46, faces 29 charges — including multiple counts of hate crimes — in the rampage. Federal prosecutors are seeking the death penalty against Bowers, who appeared in court for the first time Monday afternoon.

When he was admitted to Allegheny General Hospital after the shooting, Bowers was shouting “I want to kill all the Jews,” the hospital’s president told a local news station.

Senior English major Jessica Morris, who lives in Pittsburgh and worships at Tree of Life, knew two of the victims — Rose Mallinger, 97, was her uncle’s neighbor, and Cecil Rosenthal, 59, was a congregation member who would always confuse her for her mother.

Morris said she woke up to her worst nightmare on Saturday, but she also received text messages full of love and support, which she read before news notifications popped up on her phone about the attack.

“On Sunday, I went to a synagogue in D.C. and taught Israeli dance,” Morris told the gathered crowd. “Because as Rabbi Myers, a rabbi at the Tree said yesterday, ‘We can’t let hate keep us down.’”