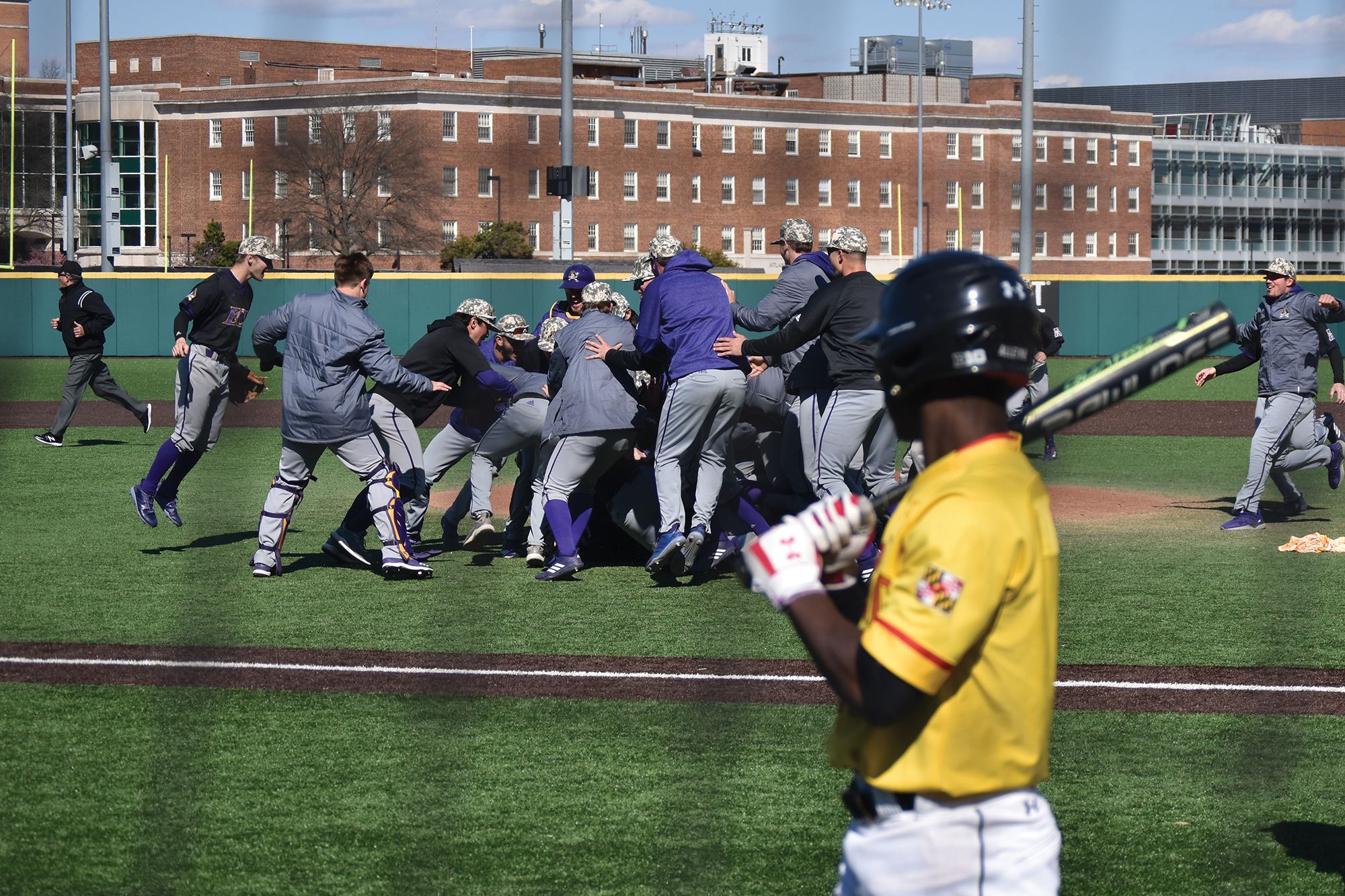 For spring break 2018, Maryland baseball traveled south and was swept by East Carolina in a mistake-ridden series that proved to be a harbinger of the team’s season-long underperformance.

In coach Rob Vaughn’s first year at the helm, the Terps missed out on the Big Ten tournament for the first time since joining the conference in 2014. A lack of clutch hitting, consistent fielding and bullpen depth all came to a head in a weekend where they were outscored 26-4.

The result was very much the same this time around — a series sweep at Bob “Turtle” Smith Stadium — and while the scorelines remained closer and errors and walks didn’t plague Maryland, a listless offense returned against No. 17 East Carolina’s standout rotation.

After a 9-0 loss in the series opener, the Terps kept it closer in a 2-1 defeat Saturday. But in the series finale, Maryland (10-8) found a new low, as left-hander Jake Kuchmaner tossed the first perfect game in Pirates history to deal the Terps a 3-0 loss.

“We knew he could really pitch, we just didn’t do a great job of making an adjustment,” Vaughn said. “Props to him, man. I tell you, I’ve never been a part of anything like that before.”

Less than two weeks ago, Kuchmaner came within one strike of a no-hitter against No. 9 Ole Miss, but East Carolina pulled him after a single broke it up in the ninth. Against Maryland, he was lights-out, fanning eight batters on 103 pitches.

Right-hander Trevor LaBonte held the Pirates (15-6) scoreless for five innings Sunday, but they broke through in the sixth with a two-run double from designated hitter Thomas Francisco that set Kuchmaner up for the win.

Kuchmaner didn’t record his first strikeout until he whiffed left fielder Caleb Walls to close the third, but quick groundouts and flyouts prolonged the southpaw’s outing. Three Terps went after the first pitch and were retired through the first four innings before Vaughn’s side showed more patience late.

“He had all three [pitches] working today and we just couldn’t get anything going,” shortstop AJ Lee said. “He pitched a hell of a game.”

While LaBonte supplied a solid start, lasting 5 ⅓ innings and allowing two runs on five hits, three walks and four strikeouts, a sputtering offense that has scored just one run this weekend couldn’t put his solid effort to good use.

Vaughn called for closer John Murphy to take the mound in the ninth to keep the game within reach, but the senior — who has a propensity to give up the long ball — allowed a solo shot from catcher Seth Caddell. The three-run lead with three outs remaining seemed insurmountable, making the only question whether Kuchmaner could make history.

With one out in the ninth, second baseman Tommy Gardiner tagged a grounder to the right side that seemed like it may end Kuchmaner’s bid at perfection. But first baseman Spencer Brickhouse laid out, snared the hopper and flipped to Kuchmaner covering the bag for the out.

Kody Milton, pinch-hitting for Walls, struck out to secure the first perfect game of the season in college baseball, and Kuchmaner’s teammates stormed the mound in celebration.

“We had a couple good swings in there, just not enough,” Vaughn said. “Tommy puts a great one on it in the [bottom] of the ninth, and they make a great play. They’re good. We knew they were good.”

Last year, Parsons’ quality start — one earned run in seven innings against the Pirates — wasn’t backed up with run support. This time around, Maryland had little chance to catch back up, with right-hander Sean Heine allowing three runs in 1 ⅔ after replacing Parsons.

“Our staff pitched well all weekend after about halfway through Friday’s game,” Lee said. “Unfortunately, we couldn’t do much offensively for them.”

Right-hander Zach Thompson did what Parsons couldn’t on Saturday, limiting East Carolina to two runs in eight strong innings. But a weak Maryland offense again provided no support, with the Terps’ only run coming on a passed ball in the fourth inning, and the team suffered its third one-run loss of the year.

For Maryland, the home-and-home series against East Carolina seemed to signal the gulf in class between the perennial tournament teams and a Big Ten program still attempting to recover from the loss of its coach.

And Kuchmaner’s perfect game was one further reminder of how far the Terps are from the Super Regional they reached in 2015.

“Last year, we played the same guys … and got swept at their place,” Vaughn said. “It was kind of a turning point in the season in the wrong direction. I thought we kind of turned on each other a little bit, I didn’t think the mentalities were great for about a month afterward.

“I told our guys out there [Sunday], look, I said, ‘I’m not going to rip you guys apart. You know what? We got beat. We didn’t execute the way we needed to,’” Vaughn added. “But what this team’s done really good and what I’ve praised them on since day one is their makeup and their DNA.”