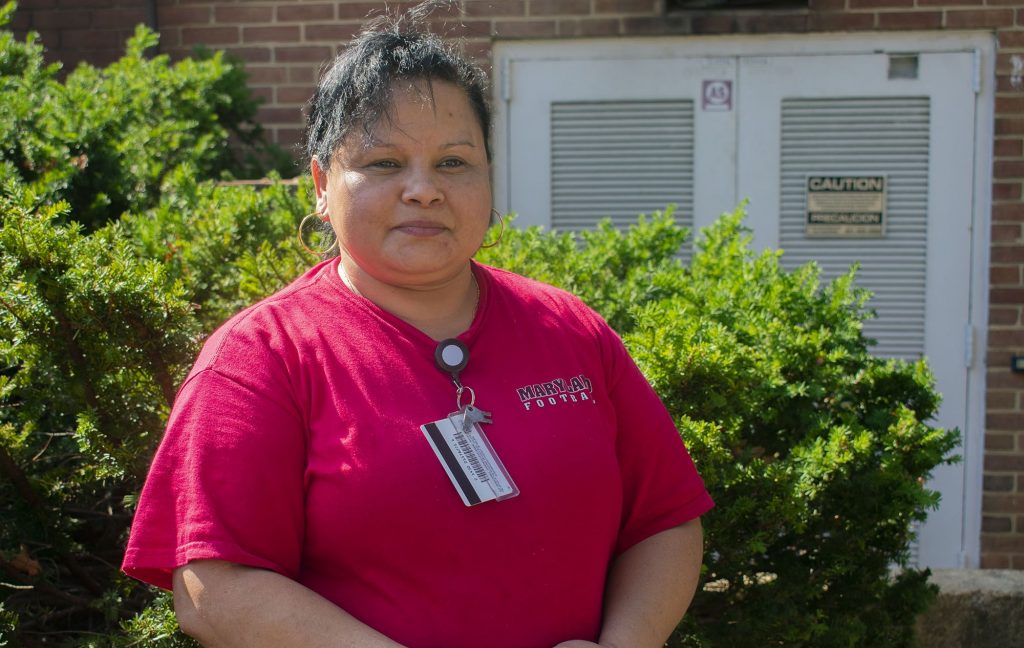 Elizabeth Garay, a housekeeper in Bel Air Hall, said that she faced health problems after being assigned to clean mold without a respirator. (Elliot Scarangello/The Diamondback)

For three days in early September, Louise Ouattara stayed home from her job as a housekeeper in Elkton Hall at the University of Maryland with a headache, chest congestion, runny nose and cough.

Ouattara had been scrubbing mold with a rag alongside the four other housekeepers who worked in the hall since June. To do this job, they said, their supervisors had given them disposable dust masks, gloves, safety goggles — but no training on how to stay healthy while effectively eradicating the spores.

“When we started working, we learn how to use the housekeeping stuff, how to clean the bathroom, the hallways,” Ouattara said. “But not mold.”

Other housekeepers in Elkton told Ouattara they experienced symptoms similar to those that kept her home for three days, she said. And they aren’t the only ones who have gotten sick after cleaning mold in campus dorms and apartments.

Since the beginning of September, about 30 workers from Residential Facilities have come to the American Federation of State, County and Municipal Employees — the union that represents employees at this university — with reports of runny eyes, respiratory issues and rashes, said Marc Seiden, an AFSCME organizer, prompting the group to bring in an expert and review the conditions.

Seiden and other AFSCME leaders are concerned that the lack of proper safety equipment or mold-removal training are to blame for this spate of illnesses. The symptoms the workers experienced are listed by the Centers for Disease Control and Prevention as potential health effects of mold exposure.

University spokesperson Jessica Jennings wrote in an email that the chemicals workers with the Department of Residential Facilities have been using to clean mold are the same disinfectants they were trained to use when they were hired. She added that they were also trained to use the personal protective equipment required by the products — nitrile gloves and safety glasses.

From Sept. 25 to 28, Jennings wrote, DRF provided its employees with voluntary training that covered mold hazards and symptoms and how to properly wear a respirator. Jennings said respirators were distributed before these training sessions, though she didn’t provide specific dates.

Ouattara said she was provided with a respirator last week, but that the damage had already been done in the months before.

On Wednesday, Keith Wrightson, a health and safety expert from AFSCME’s national office, toured Bel Air and Elkton Hall, the dorm in which many of the housekeepers who reported to the union that they had fallen ill work.

Wrightson asked workers about the equipment and guidance they had been given to eradicate the spores. He said he was not pleased with what he heard and observed.

On Sept. 27 and again on Monday, AFSCME sent a letter to President Wallace Loh and the directors for Residential Facilities, Human Resources and other departments around the campus, requesting a list of the chemicals being used to eradicate the spores and the protective equipment issued to workers assigned to the task.

Seiden said this university has not provided the union with either of these items or provided them with information about the specific type of mold in the buildings, but that an HR representative is working to schedule a meeting with AFSCME organizers to discuss their concerns.

Wrightson spoke with about 15 workers, more than half of whom had experienced symptoms similar to the ones Ouattara described. Despite what Jennings wrote, housekeepers from Bel Air Hall told him that they had not been offered respirator masks or training on how to use them. They also said that they had not been given vented goggles, shoe coverings or coveralls — all things that Wrightson said are needed to stay healthy while cleaning mold.

Elizabeth Garay and Maria Chicas, who work as housekeepers in Bel Air Hall, both came down with headaches about two weeks after they started cleaning mold in the building on Sept. 14. The women also developed rashes, and Garay said she struggled to breathe.

Garay and Chicas said they had only been given dust masks and gloves to clean the mold before they visited the Health Center on Sept. 24.

“They’re not interested in our health,” Chicas said in Spanish as Seiden translated. “Just our work.”

Chicas, Garay and Ouattara have all completed Employee’s Report of Injury Forms. On Sept. 24, they were examined at the University Health Center, the first steps of filing workers’ compensations claims.

Any employee who has a documented sensitivity to mold or has developed allergic symptoms has been excused from responding to mold calls, Jennings wrote. She added that outside contractors have been hired for the mold remediation efforts in Elkton Hall.

But housekeepers like Sherma Roberts, who has been cleaning mold in Bel Air Hall, remain frustrated.

“We try to protect you guys,” Roberts said, “but we’re killing ourselves at the same time.”