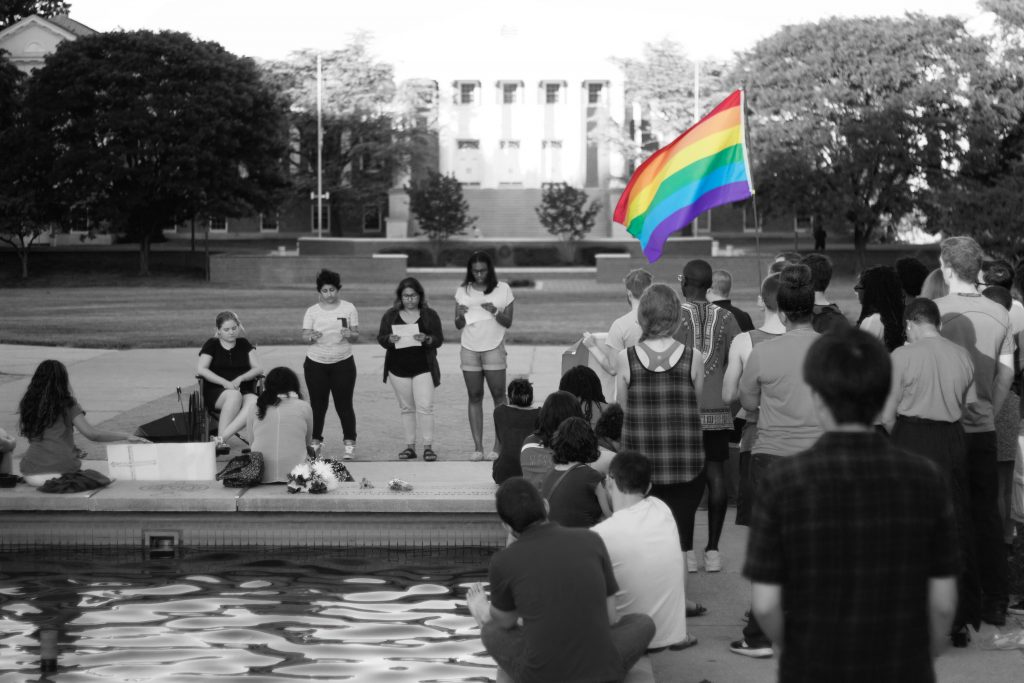 Leaders and students within the College Park community are working together to honor the victims of Sunday’s mass shooting in Orlando, Florida, as well as the LGBTQ community as a whole.

The mass shooting at Pulse nightclub by 29-year-old Omar Mateen left 50 people dead — including the shooter — and more than 50 wounded, making it the deadliest attack by a gunman in U.S. history.

Local and state officials, including College Park Mayor Patrick Wojahn, Maryland Gov. Larry Hogan and University of Maryland President Wallace Loh, spoke about the shooting and are working together to honor and support the victims.

About 60 people attended a vigil hosted by students Tuesday night on McKeldin Mall.

The United Campus Ministry also held a service and vigil on McKeldin Mall earlier that day. Many who attended were not students at this university.

On May 24, the City Council voted 5-0 with three abstentions to display a Pride Flag — a rainbow flag symbolizing the LGBTQ movement — at City Hall for one week starting June 6. But after Sunday’s attack, Wojahn asked the council to extend this display for an extra week to honor those affected, he said.

“Being a member of the LGBTQ community myself, I feel distressed at what happened,” Wojahn said. “We need to be strong as an LGTBQ community and strong as a country.”

The council unanimously passed the resolution Tuesday to keep the Pride Flag up for another week.

Hanging the flag shows support for the LGBTQ community, but it also displays overall inclusivity for all minorities in this city, said District 2 Councilman P.J. Brennan, who is gay.

“The next steps are really just being consistent and persistent with our messages of inclusion and diversity for all of the communities that represent College Park,” Brennan said. “It’s the ongoing dialogue and the ongoing visibility of minority communities in our city that will strengthen our understanding and recognize the battles in the past and make sure we don’t repeat them again.”

Hogan issued a statement Sunday offering his condolences to the victims’ families and ordering flags to be flown at half-staff “in honor of the innocent lives lost in this tragedy.”

Loh tweeted Sunday: “My thoughts and prayers are with the victims and families of the horrific #Orlando shooting and the entire LGBT community,” and said all American and state flags on the campus will be lowered at half-staff until June 16 “as [a] sign of respect for the victims of #Orlando shooting.”

This is more than just an ISIS issue, said senior English and philosophy major Will Mont, emphasizing that “we need a political change.”

“We need to reflect on our culture of transphobia and homophobia,” Mont said. “It’s about how we talk about and consider LGBTQ rights in this community.”

Mont said extending the hanging of the Pride banner was a “nice gesture,” but “there needs to be legitimacy behind [it].”

Hajarian added at the vigil that claiming the shooting was exclusively an ISIS issue is a very “unknowledgeable way to look at things” and that homophobia is a pervasive domestic problem.

“We’re supposedly free [in the U.S.], but we’re not,” Hajarian said. “We’re being shot in our communities.”

Senior architecture major Ty Ginter said: “[My] heart just sunk” upon hearing the news. Ginter is a member of the LGBTQ community and identifies as non-binary, or not identifying as either male or female.

“It’s just so shattering and just wrong — you’re being attacked in your space,” Ginter said. “Pulse was our house and those people were like our family members, our friends.

“We were thinking that the world is getting better and maybe we don’t need to hide anymore,” Ginter said. “A lot of us are feeling very scared and very vulnerable right now.”