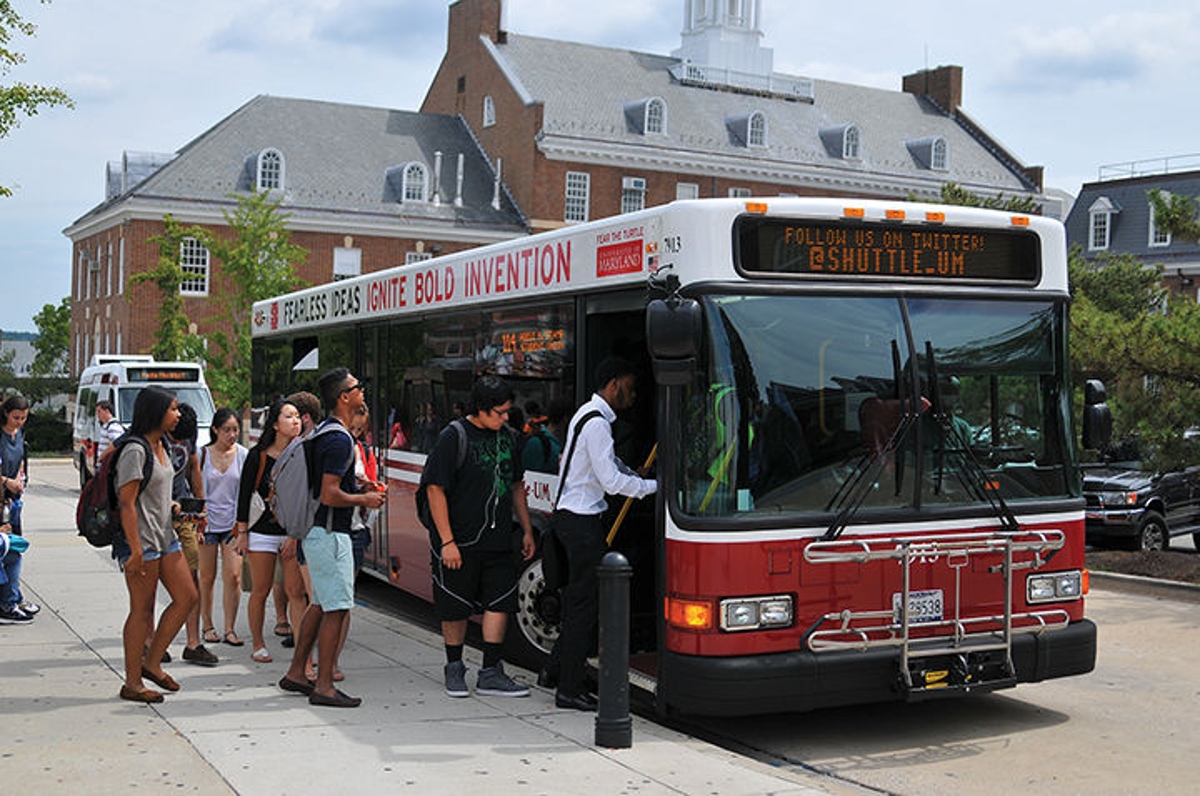 By Jillian Atelsek and Matt Perez

Routes like the #104 weekend bus to the College Park Metro Station and the #133 Mall at Prince George’s were cut, as was service for the #142 Columbia Park and Ride.

Buses like the #105 Campus Connector, which goes to Courtyards, will see increased wait times, as bus circulation will decrease.

The changes will take effect on July 1 and are expected to last for at least the remainder of the fiscal year, which will end on June 30, 2019, said DOTS spokesperson Cara Fleck.

Junior communication major Cherokee Boddy said she uses the Metro to visit home every weekend, and the elimination of the 104 weekend route will be “super, super inconvenient.”

Boddy said she’ll likely use Uber to get to and from the College Park Metro Station instead.

“It’s not like this campus isn’t the size of a whole city,” she said.

The cuts will also reduce transportation options for students who don’t live on the campus.

Doreen Addo, a junior criminology and criminal justice major, lives in Courtyards and uses the #105 to get to class and the #116 after hours.

“They don’t think about the people who don’t live on campus and can’t walk everywhere,” she said. “So I don’t know what people are gonna do — I guess take Lyft or something.”

DOTS Executive Director David Allen said a budget deficit of at least $700,000 forced the department to make the route adjustments, in addition to $188,000 in internal cuts.

“There’s no situation where someone would want to cut bus routes,” Allen said. “But when faced with this situation, you have to make the best decision you can make.”

This semester, the Committee for the Review of Student Fees rejected a DOTS proposal for a $47 increase in commuter parking fees and a $97 increase in resident parking fees that intended to account for the shortfall. The SGA, RHA and GSG voted no on the proposal, Allen said.

“No one want to cut anything, but we heard them, and the decisions are as you’ve seen,” he said.

Benwin Babu, a graduate student studying telecommunications engineering, said the cuts pose a significant inconvenience. As a Graduate Gardens resident, he said he frequently rides the #105.

“I don’t just take [the #105] for going home, I take it for going to my classes, to work, from work to class, from class to the library,” Babu said. “It’s really a shame. … Connectivity all around campus, that is something that the university should provide.”

Babu criticized both DOTS and the Committee for the Review of Student Fees, which rejected the parking fee increase.

“It’s interesting that graduate students — well, students in general — are being asked to pay more money for parking and things like shuttles and our services are decreasing,” said GSG president Michael Goodman. “So, we’re not just paying more — we’re paying more and not getting services.”

Newly elected SGA commuter student representative Gaurav Dahal said he was “extremely pissed off” about the cuts, which he described as “shocking.”

“I’m gonna fight for this,” he said. “I’m gonna fight so that … people who depend on public transportation [or] on shuttle service to come to school don’t get the back hand of it.”

But Meriam Mossad, off-campus outlying representative for the SGA, said that some members expressed during a previous discussion on the issue that they were in favor of cutting routes such as the #104 in favor of buses that served commuter students.

“We prioritized the buses that bring commuters to campus,” the junior government and politics major said. “This is their only method of coming to campus and it’s more important than, for example, buses on the weekend or such.”

Nia Wieneke, a freshman public health science major, said not being able to take the #104 to the College Park Metro Station on the weekends would limit options for students looking to travel into Washington, D.C., for academic or social reasons.

“I know a lot of people have like assignments for classes where they have to go to museums in D.C.,” she said. “There’s no way to get there on the weekends now.”

In a guide posted on the DOTS website, they recommend alternative modes of transportation for the modified and reduced routes, including the Metrobus and Prince George’s County bus system, as well as bike-sharing program mBike and car-rental service Zipcar.

CORRECTION: Due to an editing error, a previous version of this story incorrectly attributed a quote to Benwin Babu. This article has been updated.