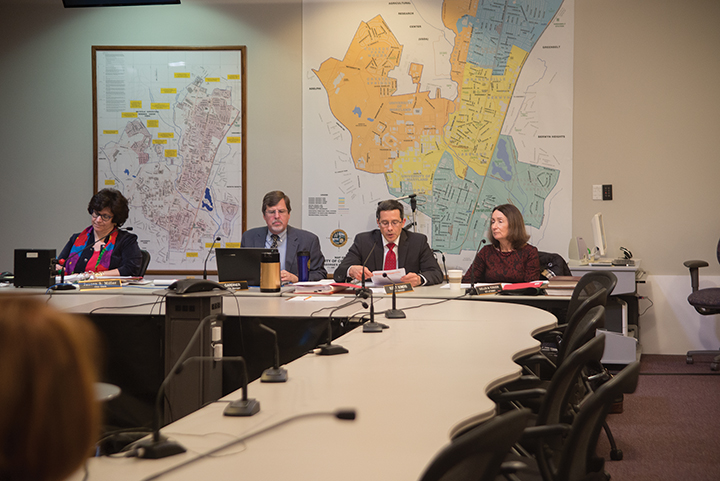 After nearly three hours of heated council and resident discussion, the College Park City Council narrowly voted to pass a proposal to establish a child care center on Calvert Road to address the city’s needs.

The council’s vote allows the City of College Park to enter into a partnership with the University of Maryland to create the child care center at a former school site on Calvert Road. The project would offer 120 spots for children 6 weeks to 5 years old and is estimated to cost $5.5 million, with this university contributing about $4.5 million. Seventeen of those spots would be guaranteed for the families of city residents who are not affiliated with this university.

“The proposal isn’t perfect — nothing really is,” Wojahn said, noting that stances on the proposal seemed to be divided by neighborhood lines. “But I want to make clear that other residents in the city who do not live in Calvert Hills were not excluded from this process.”

Over 50 people — primarily residents — attended Tuesday’s meeting, with 37 testifying to the council for more than an hour and a half. Thirty-one people spoke in favor of the proposal, while the remaining six opposed it, Stullich said.

Residents who spoke in support of the child care center were largely met with applause from the audience. One such resident was Janice Bernache, who expressed the importance of having the center not just for her family, but for others in the area.

“As you can see, I have one on deck,” she joked, gesturing to her pregnant stomach. She also highlighted the community space the center would offer, noting that, “It’s more than just 17 seats.”

Though this city currently has a limited number of child care facilities — including the Center for Young Children at this university and the College Park Nursery School on College Avenue — child care options currently offered aren’t enough to accommodate parents with children or parents who plan to have children in this city, a 2014 College Park City University Child Care Report stated.

College Park resident Cynthia McCabe, who spoke in support of the proposal, lives across the street from the back of the site and noted that her family has watched the building’s downfall firsthand. The site has remained nearly vacant for a decade, and residents at the meeting used words such as “dilapidated” and “eyesore” repeatedly to describe it.

“For years, we have seen its rapidly worsening flaws,” she said. “Now is the time to act.”

McCabe urged the council to take the available opportunity instead of continually searching without certainty.

“It’s time to stop letting the perfect be the enemy of the near-perfect,” she said.

The proposal did receive some opposition from community members. City resident Larry Winslow spoke out vehemently against the proposal, stating that he believed the cost was too high for “only 17 seats.”

“I would ask you to vote on on this resolution,” he said “It’s a very expensive thing. This whole arrangement is just not right.”

District 1 Councilman Fazlul Kabir, who voted against the proposal, incited some strong negative reactions from the audience when he proposed an amendment that would put the development on hold for an undetermined amount of time to allow research on previously undiscussed options. He did not offer details on what the alternative options could be.

Kabir said he believed the council did not explore every possible avenue and may have missed out on “a better option, a better partner.”

“Honestly speaking, this council should take responsibility and I’m part of it,” Kabir said. “I don’t want to say anything against my fellow council members. We all didn’t do it.”

He added that his proposed amendment — which was ultimately voted against — was not intended to “delay or derail” the proceedings.

“We seem to think that if we keep kicking the can down the road, things will get better,” Day said. “They will not. Keep standing still and everything will pass you by.”

City resident Patrick Lynch expressed his surprise that there was any opposition to the proposal.

“We have an opportunity to take what is rapidly becoming a liability, and turn it into an asset for the whole city,” Lynch said.

The city will now work with this university to establish a renovation timeline.