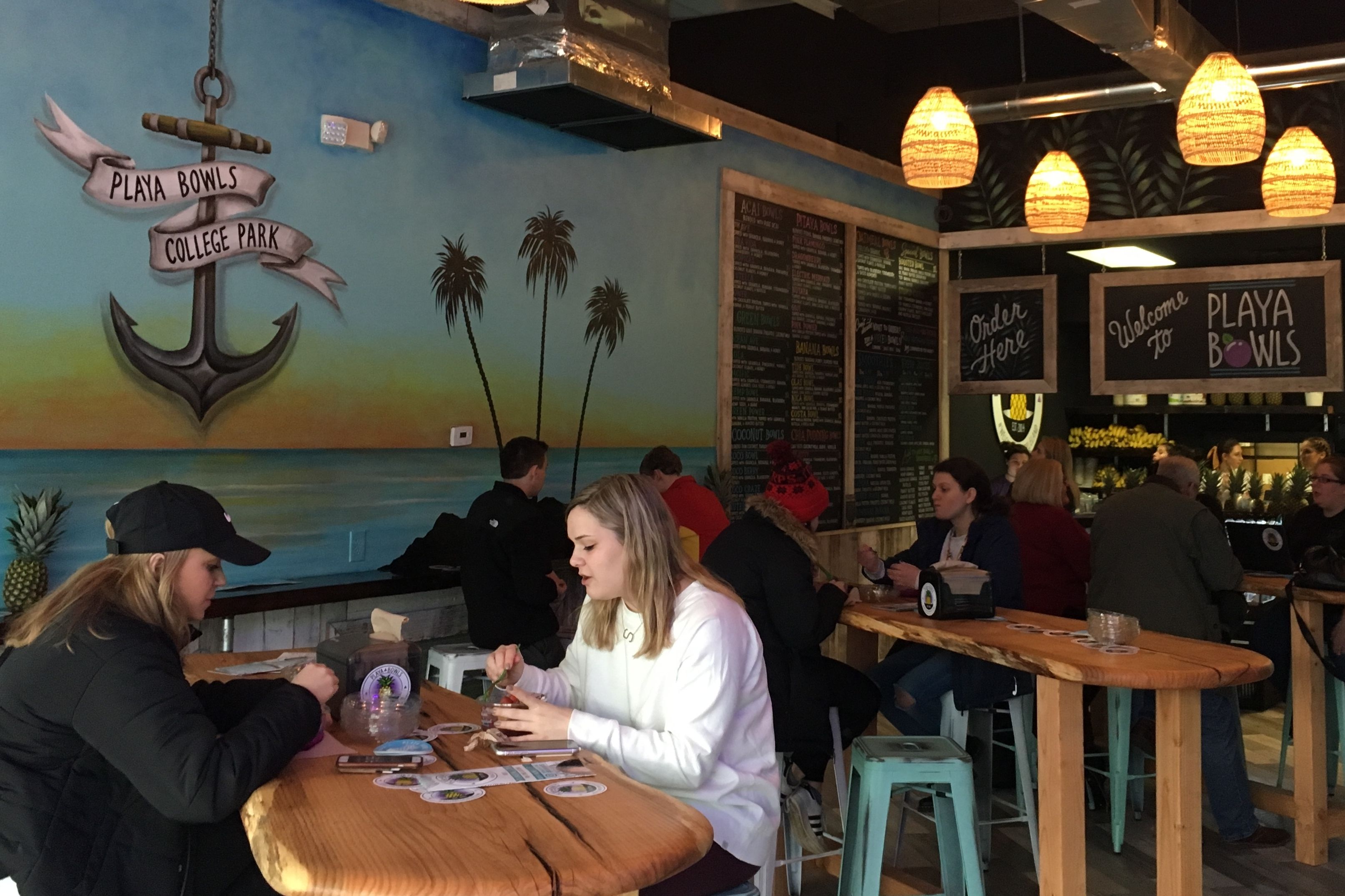 Playa Bowls, an acai restaurant, opened Sunday in its College Park location. The business offers a range of fruit-based bowls for $8 to $10 (Sarah D'Souza/For The Diamondback).

The new store — which comes during a period when several Route 1 businesses have shuttered amid rising rents — had more than 100 people in line at the grand opening, manager Alex Glassheim said. The first 50 people in line at the opening received free bowls, and the store also gave out goodie bags to customers throughout the day, she added.

Glassheim said the establishment — which offers a range of fruit-based bowl including pitaya, banana, coconut and greens-based options — stands out from its competition because of its quality and fruit freshness.

“Our competitors will use added sugars, will use added syrups, sweeteners, additional fruit. We don’t do that,” Glassheim said. “So you’re getting the purest acai you will find anywhere.”

The new business joins another smoothie bowl-selling store, Frutta Bowls, that opened in July on Route 1. An owner of the College Park store, Kelsey Healy, said last year that none of their bowls have added sugar.

“Honestly, I kind of think that the food is pretty similar,” freshman management major Harrison Tishler said, comparing the two businesses. “It’s a great place for students to go and hang out, and it’s just a good opportunity to help support some small businesses as well, and help to bring up the College Park community.”

Owners Rob Giuliani and Abby Taylor started Playa Bowls as a stand in Belmar, New Jersey. It now has over 60 stores nationwide.

When Playa Bowls saw success at its University of Delaware location, the company decided to open in College Park because of the similarities between the campuses, said Jessica Herron, a manager of the College Park location.

Route 1 is very similar to its Main Street location in Newark, and there has been a high demand for the College Park store on their website and through in-person customer requests, said Glassheim.

Allison Johnson, a sophomore communication major who lives in New Jersey close to where Playa Bowls first opened, considers herself an avid Playa Bowls customer. She regularly eats there because of its consistent taste and fun atmosphere, and she said she could see herself going there two to three times per week.

“I’m really excited that it opened up in Maryland because seeing it start from a little fruit stand in my town, to then growing all over, it’s really exciting and it’s a great success story,” Johnson said.

Each set bowl ranges from around $8 to $10. While sophomore psychology major Carly Steinberg thought the range was “a little bit high,” she said the quality of the product makes up for it.

“I really like [the atmosphere],” Steinberg said. “It’s really calming and it’s perfect for a college town.”