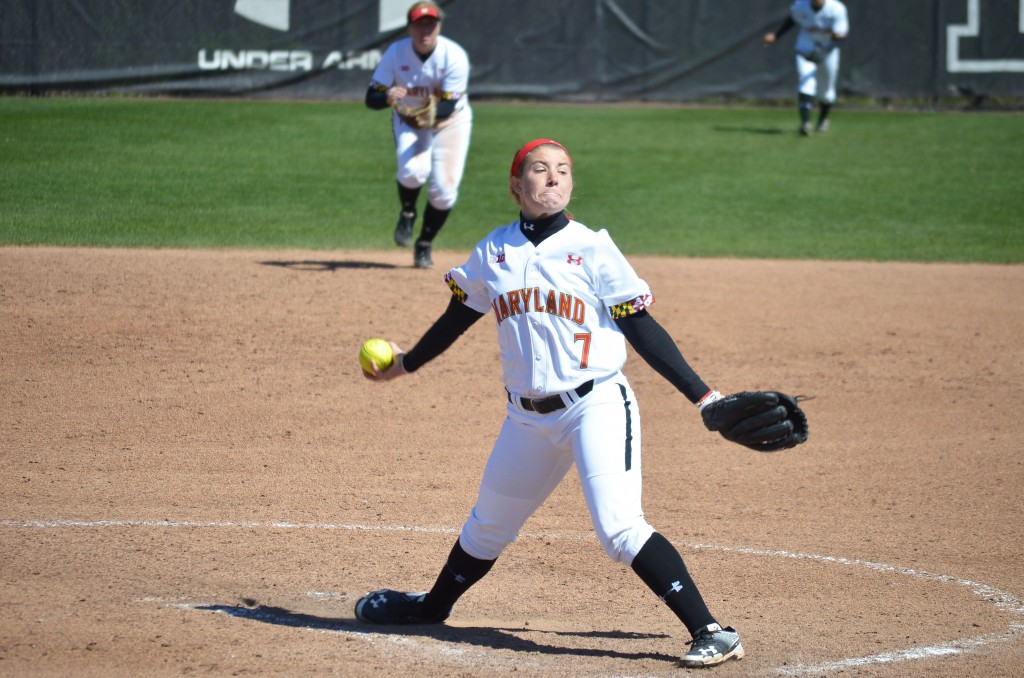 Facing the best team in the Big Ten, the Maryland softball team didn’t have an answer for Michigan’s potent offense, playing two shortened games because of its pitching struggles. The Terps were outscored 26-1 and lost the final two contests of its series against the Wolverines in a combined 11 innings.

Maryland’s pitching has struggled since conference play started, surrendering 116 runs over 17 games, the second-most runs allowed in the conference in that span. Pitcher Ryan Denhart is the lone player on the roster with a sub-four ERA. The starters’ difficulties bumped Maryland’s team ERA up to 6.47 in Big Ten contests.

The Terps’ inability to throw strikes consistently has proven costly, and could be highlighted again this weekend against Ohio State. The Buckeyes boast one of the Big Ten’s most dominant offenses. Their lineup has blasted 21 home runs and recorded 81 RBIs, both top-five marks in the conference.

“Our pitchers just have to make sure they make their pitch and not cave into the hitters,” coach Julie Wright said.

[Read more: Maryland softball is hurting itself with constant errors]

While Maryland’s pitching blunders have contributed to five shortened conference losses, the team’s defensive miscues have forced the Terps pitchers to throw extra pitches. In its sweep against the Terps, Michigan capitalized on Maryland’s 11 errors, scoring seven unearned runs.

Maryland’s 29 errors in Big Ten games have accounted for 19 runs, an issue that has extended pitchers’ outings.

“Ohio State hits the ball really well, so we know we need to come in and play clean defense,” infielder Skylynne Ellazar said.

Maryland’s pitching staff held an opposing lineup to three or fewer runs just once in its last three series. The Terps have been swept each of the last three weekends, and lost each game against Illinois, Indiana and Michigan by six or more runs.

“I’ve been on the defense the entire season, but especially this week about how we can’t add baserunners,” Wright said. “That’s what we did against Michigan and you can’t do that with a great-hitting team, you need to take outs when you have them.”

Maryland (18-30, 7-10 Big Ten) enters the weekend in the bottom half of the Big Ten standings and will need to remain in the top 12 to secure a spot in the conference tournament. So against the Buckeyes (29-11, 10-6 Big Ten), the Terps plan to prioritize pitching and focus on executing defensive plays.

“Just being in high-intensity situations, slowing the game down and not making it bigger than it is is something we struggled with the past couple weeks,” Ellazar said. “In practice, coach has been trying to put a lot of pressure on us, so we can handle all that pressure, complete plays and get our job done.”

In uncertain times, Maryland softball’s Mark Montgomery is focusing on what he can control

Maryland softball goes above .500 with 4-1 weekend at Panther Invitational