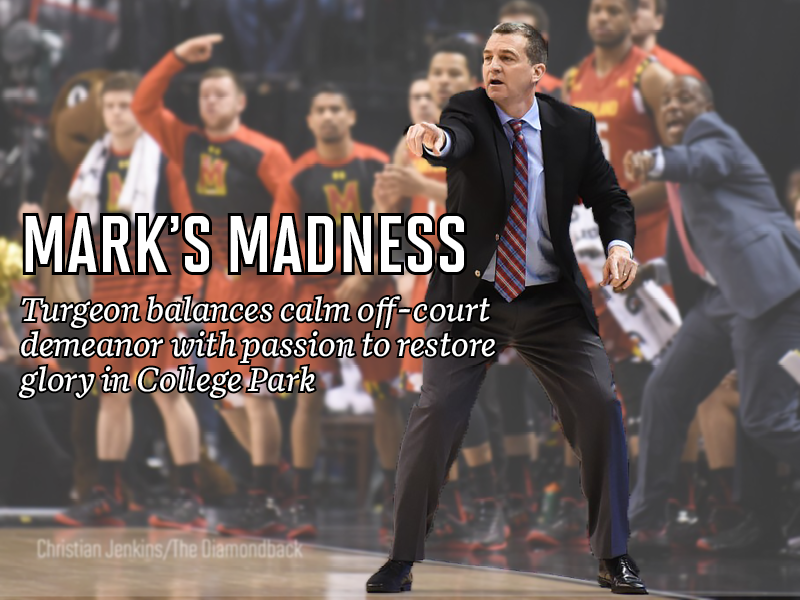 In a few hours, the Terrapins men’s basketball team would take the floor for the opening tip. On the hardwood, Mark Turgeon would be a ball of energy, pacing the sidelines and barking at the officials. Rarely would he sit down.

But as he entertained an old mentor, Turgeon was calm and relaxed. The coach ironed a shirt and chatted with his guest. They talked about family. They talked about high school state championships and undefeated seasons. But they didn’t talk about the upcoming contest.

This was the pregame scene on several occasions last season when Turgeon met his high school coach, Ben Meseke, hours before a game.

Each time, Meseke was amazed by Turgeon’s tranquility.

“If I was coaching, I’d be going nuts,” said Meseke, who led Turgeon and his Hayden High School teammates to an undefeated 1982-83 season.

Most Terps fans only see one side of Turgeon: the screaming high-intensity leader of a storied program. But off the court, he’s low-key, as Meseke can attest. He’s quiet when he takes his kids to their sporting events or to church. He’s just happy to be there, said Ann Turgeon, his wife.

So Friday, when the No. 5-seed Terps face No. 12-seed South Dakota State in the first round of the NCAA Tournament, Turgeon will likely follow his pregame routine. Yet when the game starts, he’ll be overcome with passion.

“He handles his emotions well,” said Jim Schaus, the athletic director at Wichita State when Turgeon coached there. “Mark is kind of like that duck floating across the water. Even though he looks calm and controlled, underneath, his feet are going like crazy.”

When Turgeon was in elementary school, his friends goofed off during Hayden basketball games. Not Turgeon. Instead, the young boy intently watched the contests, sometimes from the first row. He appeared to absorb everything, Meseke recalled.

“His buddies were all up in the upper balcony throwing popcorn at the girls and all that,” Meseke said. “But he just always had that interest.”

When Turgeon reached high school, he helped lead Hayden to back-to-back state championships, including a 25-0 season. But Turgeon was undersized and received little attention from college basketball powerhouses. So Meseke arranged for Turgeon and a teammate to meet then-Kansas coach Larry Brown.

Brown took the trio — Meseke accompanied his players on the trip — out for ice cream. There, Brown asked Turgeon why he thought he could play for Kansas.

Turgeon’s response left Meseke so surprised he nearly spilled his ice cream in his lap.

“He said, ‘Coach, I’m better than any guard you’ve got right now,” Meseke recalled. “It really made an impression.”

Turgeon didn’t disappoint, becoming the first Jayhawk to play in four NCAA Tournaments. Early in his Kansas career, though, Brown told Turgeon his future lay with coaching, not playing.

So Turgeon paid close attention to what Brown and the coaching staff did. Even then, Turgeon “always had his coaching hat on,” said Tad Boyle, who played with Turgeon at Kansas and now coaches Colorado.

“You knew from day one, from the time I met him, that he was going to be a coach,” Boyle said. “That’s what he was meant to be.”

Turgeon got his start as an assistant under Brown in 1987-88, before working his way up the ranks. He became a head coach for the first time in 1998-99 at Jacksonville State. From there, he parlayed successful stops at Wichita State and Texas A&M into a shot at the job with the Terps. 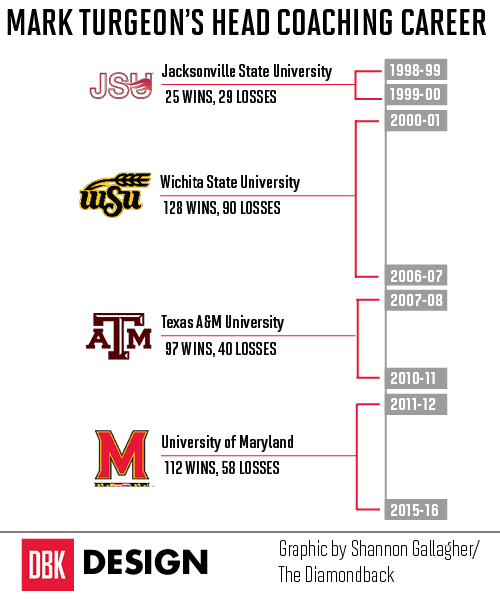 After the Terps compiled a 17-15 record his first season in 2011-12, Turgeon gradually built the program. The peak was supposed to come this season.

When the Terps stepped on the floor for the first time this season in November, they held the nation’s No. 3 ranking and shouldered high expectations. Many experts labeled Turgeon’s squad national title contenders.

But when Turgeon faced reporters Thursday, the Terps had just learned they were a No. 5-seed in the NCAA Tournament. The selection committee determined there were at least 16 better teams than the Terps heading into March Madness.

“It’s been a challenging year,” Turgeon said. “I have tried to see the big picture.”

“I feel like he needs to get away from that,” Ann Turgeon said.

There is one exception to Turgeon’s pregame routine. Hours before games, he chats with his oldest son, Will, about the upcoming opponent.

“That’s kind of one of the ways he connects to our 16-year-old, which is nice,” Ann Turgeon said.

Even as the losses mounted late in the season — the Terps have dropped five of their last eight games heading into the tournament — Turgeon’s behavior has remained constant: fiery on the court and reserved in press conferences.

He appears unfazed by the mounting pressure even as the Terps head into the most crucial part of the season.