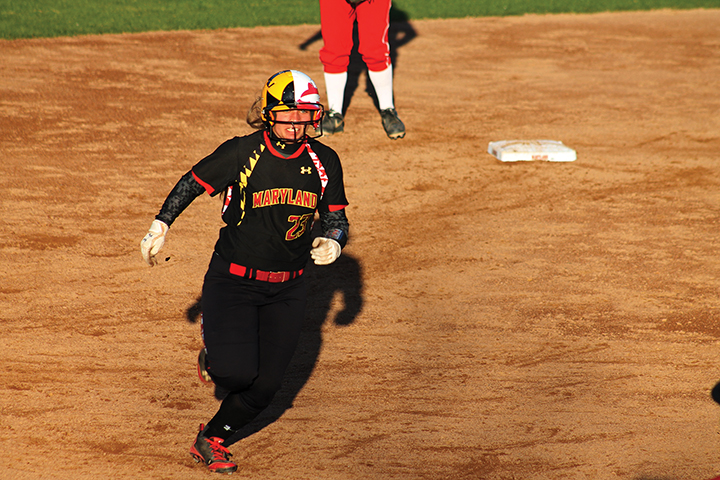 Maryland softball infielder Juli Strange met with coach Julie Wright before the Mardi Gras Classic to discuss Strange’s plan at the plate. Strange then spent all week in practice sliding her back elbow in toward her ribs to shorten her swing. That would allow her to drive the ball better.

Tweaking her approach worked last weekend. After hitting 3-for-16 in the team’s first two tournaments, Strange batted .500 in the Mardi Gras Classic with a .625 on-base percentage. Through 14 games, the redshirt senior ranks second on the team in batting average (.344) and leads in on-base percentage (.447).

Drake pitcher Nicole Newman, the Division I strikeout leader, struck out the first eight Terps in Friday’s tournament opener. Then she faced Strange, who roped a single to right field for Maryland’s first hit before stealing second.

In the fifth inning, Strange singled again, this time to third base. She was the lone Terps starter not to strike out in the 3-0 defeat.

“Our philosophy is that we’re trying to shorten up, hit the ball up the middle, hit the ball where they’re not,” Strange said. “It’s a shorter swing, and it’s definitely more of a ‘put the ball in play, put pressure on the defense’-type style.”

Strange’s success at the plate continued with a two-hit performance in the Terps’ 3-0 win over Bowling Green. Against Bradley, she picked up three more hits and scored two runs in a 4-2 defeat. Infielder Jordan Aughinbaugh, who drove in Strange twice and hit 6-for-13 at the Mardi Gras Classic, said they each hit extra during the week with assistant coach Lisa Carey.

“Finally, it just went our way,” Aughinbaugh said. “It’s a game of failure, and sometimes you win some and sometimes you lose some. See ball, hit ball. Don’t make it more complicated than it needs to be. Just go out there and try to hit the ball hard.”

Strange went 0-for-3 from the sixth spot in a 3-0 loss to Louisiana-Lafayette on Saturday afternoon but responded Sunday by driving in her first run of the season. In the first inning against Dartmouth, her RBI double plated outfielder Amanda Brashear, opening the scoring in an eventual 5-5 tie. She delivered her first extra-base hit batting third after opening the tournament in the nine hole.

Strange’s production seemed to warrant the switch, yet her mindset at the plate stayed the same.

“I try to have a good at bat every time,” Strange said. “Every time you go up to the plate you have a job to do. So, whether that’s in the two hole, the three hole, the nine hole, you always have a job and that’s what you’re focused on, regardless of where you’re at in the lineup.”