No. 2 Maryland women’s lacrosse cruises to 18-5 win over No. 6 James Madison 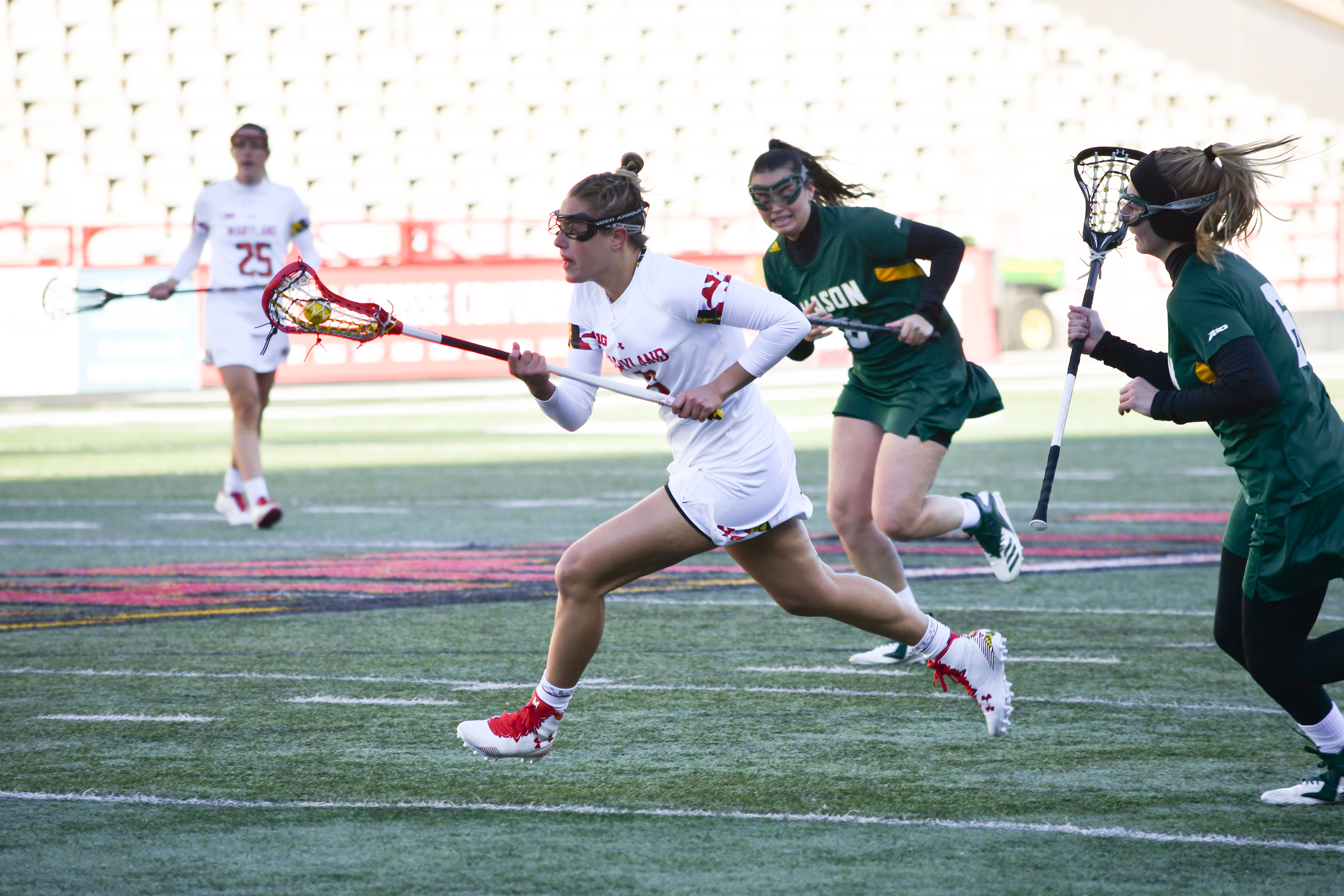 With 18 minutes remaining in the second half of No. 2 Maryland women’s lacrosse’s contest against No. 6 James Madison on Sunday, the Terps needed a goal to reignite their offense.

Maryland had gone almost 12 minutes out of the break without a score, and though the squad still had a five-goal edge, they had lost their foothold on the game.

The defense weathered the storm, though, allowing just one goal during the stretch. Then, off a free position chance, midfielder Erica Evans found fellow midfielder Meghan Siverson for a close range finish to end the drought. The strike restored a six-goal lead for the Terps, and began a scoring burst that turned a relatively close game into a blowout.

While it took some time to get going, a strong final 20 minutes on both ends of the field carried Maryland to an 18-5 win against the reigning national champions.

“Overall we had a great performance,” coach Cathy Reese said. “From start to finish we saw a lot from a bunch of players.”

On the opening possession, Maryland (10-0) immediately faced pressure from a stingy James Madison (7-3) defense. But attacker Kali Hartshorn found an opening. With six seconds remaining in the shot clock, the senior threaded a pass through to Evans, who finished under pressure to establish a 1-0 lead that wouldn’t be relinquished.

“People were just cutting at the right time and we were all capitalizing on those chances,” Hartshorn said.

Despite the level of talent on the field, both sides were loose early with their passes, due to aggressive defense, and the two teams combined for four turnovers in the first five minutes.

Maryland had a response to the physical play, though. Off a free position opportunity, Siverson found midfielder Grace Griffin for a 2-0 lead. Midfielder Jen Giles benefitted from a similar set play just two minutes later, and the Terps looked to be in control with a three-goal advantage.

However, the Dukes stuck around. They pressured the Maryland defense and forced a loose ball following a blocked shot. Attacker Maddie McDaniel reaped the benefits of her team’s hustle, picking up the ground ball and finishing into an almost empty net.

For the next few minutes, the teams traded shots to no avail. But Giles reopened the scoring with 18:26 remaining in the half, evading multiple defenders for a highlight reel finish and her second goal of the day.

James Madison had its moments in the opening period. Though they shot a meager 27 percent, the Dukes were still causing problems in other areas, forcing the Terps into eight first half turnovers and staying close on draw controls. The hustle plays kept them within four for most of the half.

But Maryland wouldn’t surrender its lead.

For every James Madison forced turnover, the Terps seemed to produce one of their own. Maryland began to overwhelm the Dukes, and with goals from Evans, attacker Brindi Griffin and Grace Griffin to close the half, the Terps held a 9-3 lead.

To start the second half, Maryland was out-hustled by Caroline Sdanowich on a draw control, and the Dukes immediately went on offense. McDaniel found space inside the arc and finished past Taylor to set the stage for a potential comeback. The Terps struggled on offense, missing shots and going 12 minutes without a goal.

However, they eventually came alive. After the unprecedented scoring drought, Maryland caught fire with five goals in just more than five minutes of game time.

“They threw a bunch of different defenses at us,” Reese said. “I thought our team did a nice job adjusting.”

While James Madison continued to create some looks, Maryland’s defense held strong for the remainder of the game.

“On the defensive end, we did a really nice job of sticking with our scouting report and limiting offensive opportunities that they had,” Reese said.

After Giles capped the scoring burst with her fourth goal of the game with 13 minutes remaining, Maryland began to substitute out its starters as it often has in its frequent blowouts.

The Terps’ bench players made their impact, putting the game well out of reach. Midfielder Hannah Warther scored on a dramatic solo effort for an 11-goal lead to activate a running clock with nine minutes remaining, and two other non-starters scored for the Terps.

“To be able to get some new faces in there and not miss a beat is what I’m really proud of,” Reese said.

So despite a slow start to the half, Maryland weathered the physical game, and easily toppled the Dukes to continue its perfect start.

“[We are] definitely an awesome team this year on and off the field,” defender Julia Braig said. “You can see that in the way we’ve been playing.”