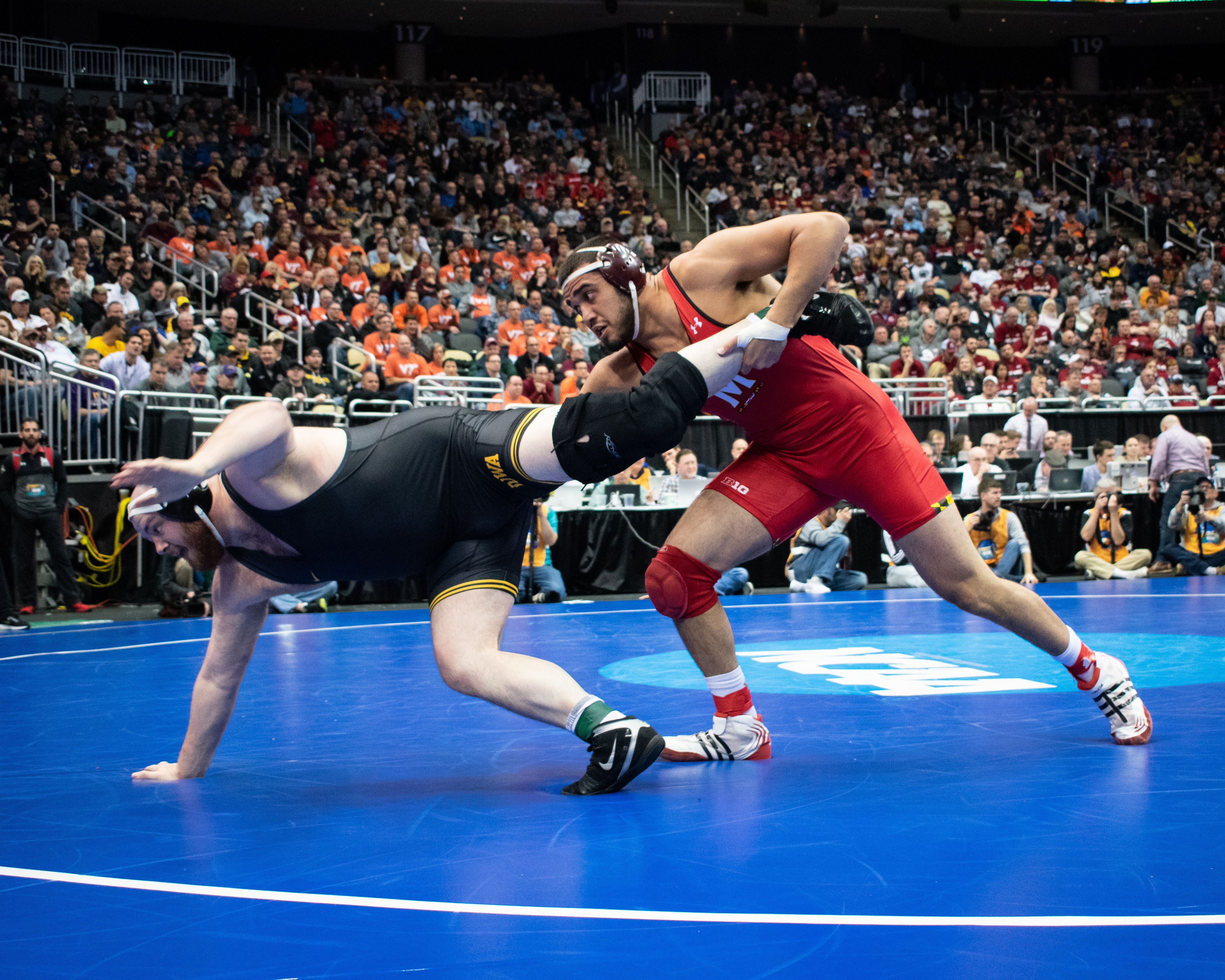 Heavyweight Youssif Hemida takes down Iowa's Sam Stoll with a single leg in the NCAA Tournament round of 12 in PPG Paints Arena on March 22, 2019. (Tyler Ecker/The Diamondback)

With his senior season nearing its conclusion, Maryland wrestling heavyweight Youssif Hemida found himself mired in a slump, losing four straight matches by a combined score of just 18-8.

Hemida’s inability to score late in matches was quickly becoming the defining aspect of his final year as a Terp. But with a 3-1 overtime win over George Mason’s Matt Voss on Feb. 17, Hemida got back on track and turned his season around.

The postseason came at the perfect time for Hemida, when his confidence and his offense were in full swing. He placed third at the Big Ten tournament and sixth at the NCAA tournament, securing himself a second straight All-American finish and ending his Maryland career in style.

“It’s amazing,” Hemida said. “I wanted to win a national championship, but I’m happy. Not satisfied, but happy.”

At last year’s NCAA tournament, Hemida faced Lehigh’s Jordan Wood in the round of 12, known as the “blood round.” But during a first-period takedown by Hemida, Wood injured his wrist and was unable to continue.

While the injury default meant Hemida achieved All-American status, it didn’t quite sit well with the Terp. This year, he earned the All-American title on his own accord.

“This was definitely harder than last year,” Hemida said with a laugh. “It’s not like I wasn’t worthy last year, but this year it feels really good.”

Hemida left no doubt as he dominated his side of the consolation bracket on day two of the tournament. He ran through Iowa State’s Gannon Gremmel and Utah Valley’s Tate Orndorff, pinning them both in short order.

Next up for Hemida was the blood round against Iowa’s Sam Stoll, who took a very different path to get there.

Hemida had used his quickness and offensive skills to pin his two previous opponents, while Stoll didn’t take a single shot in any of his matches Friday and utilized his brute strength to advance.

That game plan came back to haunt Stoll.

An early takedown gave Hemida control of the match, and Stoll could not function offensively. The Terp added two more takedowns and defeated Stoll easily by decision, 7-3, avenging his 1-0 loss to the Hawkeye during his losing streak earlier in the year.

“That’s gotta be one of the most satisfying matches that he’s had in his career,” coach Kerry McCoy said. “To go out there and not just win, but really dominate a guy that he really battled with in the past … it’s just awesome.”

Just minutes later, Hemida put his offensive prowess on display once again, as he took down Central Michigan’s Matt Stencel twice and beat him handily, 6-2.

Hemida has been the star pupil of his departing coach for years, and with this weekend being their final appearances with Maryland, the link between them will be that much stronger.

“[Hemida] had the trust in me to believe in what we were doing,” McCoy said. “It was great for our relationship, and it helped us win a lot of matches together.”

While Hemida’s offense has come and gone this season, it’s been there when he’s needed it most. As the two-time All-American and U23 world silver medalist now embarks on his international career, he’s cemented his impact and legacy with the Maryland wrestling program.

“I put in a lot of work in this program,” Hemida said. “It’s pretty cool to know I did something special here.”