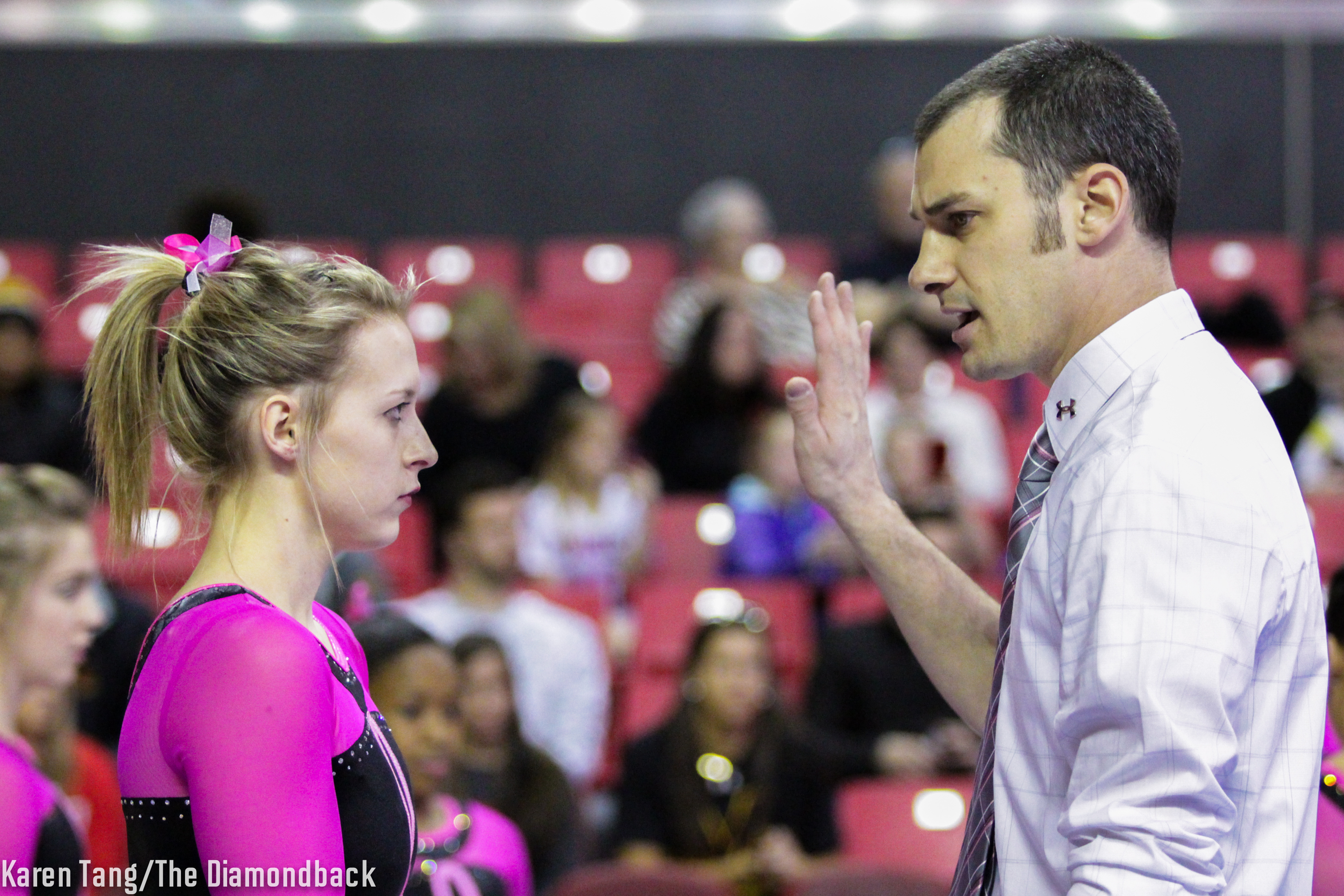 Coach Brett Nelligan gives sophomore Abbie Epperson a pep talk before her bar routine during the Terps loss 195.5 to Iowa 196.275.

Entering Monday’s tri-meet against Michigan and Eastern Michigan, Terrapins gymnastics sophomore Abbie Epperson said her team needed to bring its A-game if the Terps were going to upset the No. 3 Wolverines and get revenge against the Eagles, who beat the Terps earlier in the season.

Early missteps set the Terps back, though, and they weren’t able to mount a comeback, despite a strong second half of the meet.

“It was a tale of two halves,” coach Brett Nelligan said. “In the second half, we finally found ourselves.”

Nelligan’s squad began the meet on bars, which was the only event it had scored more than a 49 on twice this season. As has been the case in each of the team’s meets this year, though, the Terps (2-5, 0-3 Big Ten) didn’t score well in the first rotation.

“Nothing seemed to come easy for us in practice,” Nelligan said. “And I think that the first half was left over from that.”

Miscues on two routines put a dent into the Terps’ score, causing them to tally a season-low 48.175 on bars. Even after watching the tough week of practices, Nelligan called the mistakes “unusual.”

Nelligan huddled everyone together at the midway point, which sparked an improvement.

“At the halfway point, we pulled it in,” Nelligan said. “And we said ‘We haven’t been ourselves this whole meet, let’s make a commitment to settling down for the second half.'”

In the final rotation, they posted a season-high 48.8 on vault, despite performing just five routines. But by then, the deficit was much too large for the team to make up.

“Floor helped us get back on track,” said sophomore Dominiquea Trotter, who performed on vault. “It motivated us to finish the right way, like we know how to.”

Trotter made her season debut Monday after missing the first three meets with a concussion. She posted a 9.8 on vault and a 9.775 on the beam, both just short of matching her best scores from her freshman campaign.

Though Trotter said she did feel “first-meet jitters,” they didn’t reflect in her scores nor her demeanor, Nelligan said.

“Trotter is such a competitor,” Nelligan said. “When she couldn’t travel with us, it was hard being on the road without her.”

Even with Trotter’s return to the lineup, the Terps’ 48.325 on beam ranks third out of their four meets. Nelligan may get another gymnast back soon, though, as freshman Shynelle Agaran, who also missed the first three meets with a concussion, performed an exhibition routine on beam.

Last week, Trotter did the same against Iowa before fully returning to competition in Michigan.

“It was really cool to see Agaran perform for the first time,” junior Sarah Faller said. “She had a really good performance.”

Faller had a strong meet herself, setting season-high scores on vault and bars and scoring a 9.75 on beam.

“The things we did well,” Nelligan said, “we did really well.”

“We’re leaving what we don’t like on the floor here,” Faller said, “and taking what we did well with us.”

CORRECTION: Due to an editing error, a previous version of this story incorrectly stated this meet was the Terps’ lowest scoring total. Their lowest scoring meet was Jan. 16 at Minnesota. This story has been updated to reflect the correction.