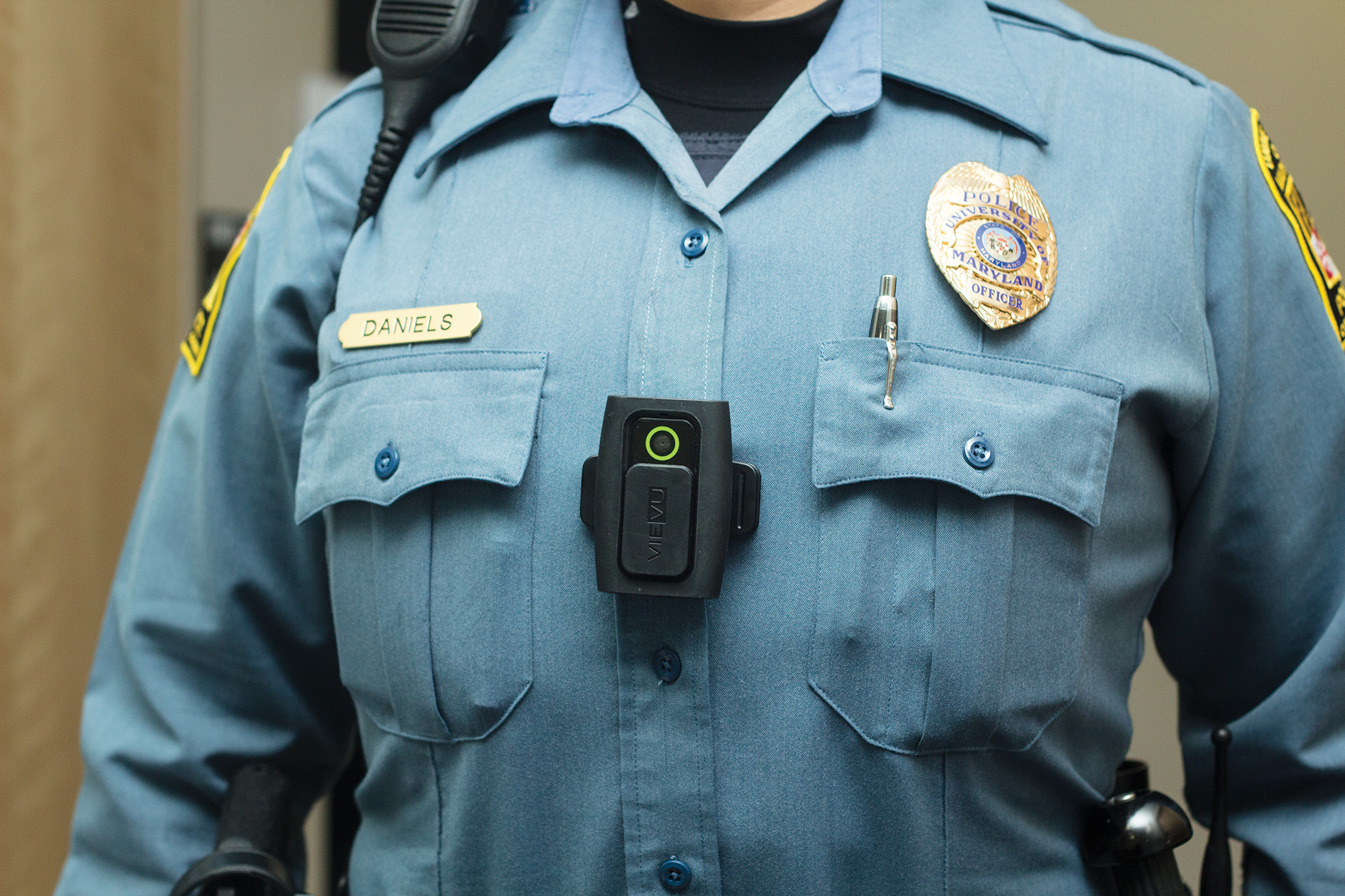 Officer Daniels with the UMPD wears the new VieVu body cameras as a part of a new initiative.

Prince George’s County Police hope to roll out its body camera program by January, with plans to outfit 10 officers in each of their seven districts.

County police are partnering with the University of Maryland sociology department to study the pilot program’s effectiveness and measure community perception of the body cameras.

Sociology professors started studying the officers before the pilot program began, and will continue to do so as the pilot program is adopted. They will also offer implicit bias training for new officers and have already begun a series of community surveys regarding the perception of body cameras in the county.

“There is still a belief in the Prince George’s community that police officers are corrupt, hiding things and will lie to avoid responsibility for doing something improper,” said Steven Vinick, a defense attorney who has been practicing law in the county for 21 years.

Carlos Acosta, county police’s inspector general, is in charge of the body-worn camera initiative for the county’s 1,700-member police force. He said he believes they will go a long way in improving the department’s reputation.

“Police departments as a whole need to start policing themselves better,” Acosta said.

It has been seven years since the Department of Justice released county police from federal monitoring for “alleged misconduct” in their canine section and “an alleged pattern or practice of excessive force throughout the Prince George’s County Police Department,” according to a Justice Department memorandum.

“It’s behavior modification,” Acosta said. “I believe the person behind the camera and the person in front of it will behave better.”

Sociology professors Kris Marsh and Rashawn Ray will be testing Acosta’s theory. The university has been collaborating on this project for about a year and a half.

“We have information that citizens perceive interactions between the police and community will change in a positive way with body cameras,” Ray said

In addition to tracking officers as they adapt to using body cameras, the professors are looking at issues of privacy for those on both sides of the camera, as well as potential changes in officer productivity and behavior.

“The police officers have a lot of opinions about the body cameras,” said Marsh, who has been conducting surveys with the first squads slated to wear body cameras. “As soon as I walk in, they’re ready to start talking about them.”

After a slew of high-profile police brutality cases in the United States, the issue of body cameras was pushed to the forefront. Proponents say the cameras serve as a check on officers’ power.

Footage from two of the 12 responding officers’ body cameras was released. After an investigation, one officer was cleared of misconduct, and a second was suspended for two weeks without pay for “conduct unbecoming an officer.”

The incident was met with protests on the campus and resulted in the launch of an internal program to train officers in cultural diversity and implicit bias.

University Police spokeswoman Sgt. Rosanne Hoaas declined to comment when asked what challenges and issues University Police has encountered with its body-worn camera program since the pepper spray incident. The Diamondback previously reported the department’s decision to release footage from the May 21 incident at Courtyards does not set a precedent.

Acosta said he is trying to build a culture of openness within county police by working with this university.

“The big thing that surprised us is how transparent the Prince George’s Police Department is being,” Ray said. “The level of access we’ve had is unprecedented.”

Charles Wellford, former chair of the criminology and criminal justice department, has worked with more than 20 police departments, including county police.

He said the best police forces are those that are always looking to improve themselves.

“That’s the kind of department we have in Prince George’s County now,” he said. “When they see a problem, they go after it.”