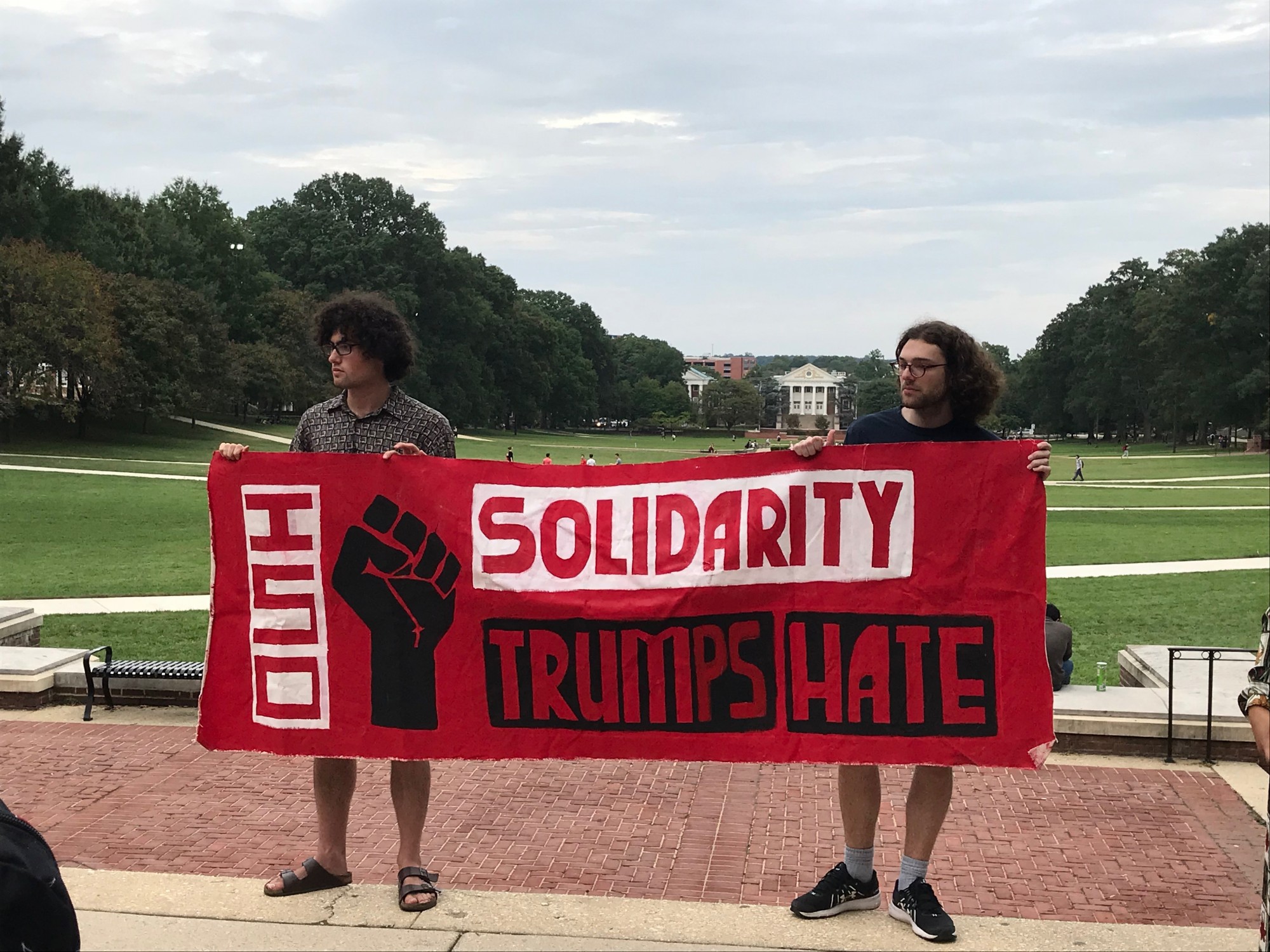 “Hey hey, ho ho! Kavanaugh has got to go!” chanted a group of protestors in front of McKeldin Library on Tuesday afternoon at the University of Maryland.

Some were crying and others had anger on their faces as they protested the Supreme Court nomination of Judge Brett Kavanaugh.

Kavanaugh and Christine Blasey Ford, a psychology professor at Palo Alto University and the first woman to accuse him of assault, testified before the Senate Judiciary Committee on Sept. 27. The next day, Sen. Jeff Flake (R-Ariz.) called for a one-week delay of the vote on Kavanaugh’s confirmation to allow the FBI to investigate further the allegations made by Ford and others.

The protest was organized by this university’s International Socialist Organization chapter, and co-hosted by the UMD Pride Alliance and Preventing Sexual Assault.

“Although I can’t do much to stop [Kavanaugh’s confirmation] in my personal self, I wanted to arrange an event where we would be showing solidarity and raising consciousness about the issue,” said Homa Hajarian, a senior agricultural science and technology and anthropology major and ISO member.

Outside McKeldin, protesters spoke one-by-one. Kathy Diamond, a 21-year-old College Park resident, walked up to the front of the crowd and, with tears in her eyes, said men should be holding other men accountable for their actions.

“Had there been people with Brett Kavanaugh at that party, that said ‘Hey dude, you can’t do that,’ he might not have done it,” Diamond said to the crowd of about 25 protestors.

After she finished speaking, Diamond ran into a student’s arms and began crying.

“Whatever we wear, wherever we go. Yes means yes, and no means no!” the crowd chanted during the demonstration, which lasted for more than an hour. At one point, someone screamed “MAGA!” as they rode by on a bicycle, but no one responded as the crowd dispersed.

“I think it’s really important for men to show up and to speak out, and I was happy to see that there were plenty of men in our audience today,” said another ISO member, senior psychology major Eli Kane.

Diamond said it’s important to speak out and let sexual assault survivors know that there are people on campus who care and who have been through similar experiences.

“So many people are watching the news and watching their own trauma replayed on the national scale, which is fucking ridiculous that that has been allowed to happen,” Diamond said.

Just days before Kavanaugh was nominated, Ford reached out to her congresswoman, Rep. Anna Eshoo (D-Calif.), to report allegations of sexual assault against Kavanaugh, which she said happened at a house party in Montgomery County in 1982.

Ford said Kavanaugh pressed her against a bed and tried to remove her clothing before covering her mouth with his hand, though she added that she was later able to escape. At the time, she was 15, and he was 17.

Kavanaugh has repeatedly denied the allegations, including in his testimony to the Senate Judiciary Committee.

After Ford came forward, another woman, Deborah Ramirez, told The New Yorker that Kavanaugh sexually assaulted her while she and Kavanaugh were both students at Yale University. Kavanaugh has also denied those allegations.

“This is a smear, plain and simple,” he said in a statement released by the White House on Sept. 23.

A third woman, Julie Swetnick, also accused Kavanaugh of sexual misconduct at parties while he was a student at Georgetown Prep in North Bethesda. Kavanaugh has denied these claims as well.