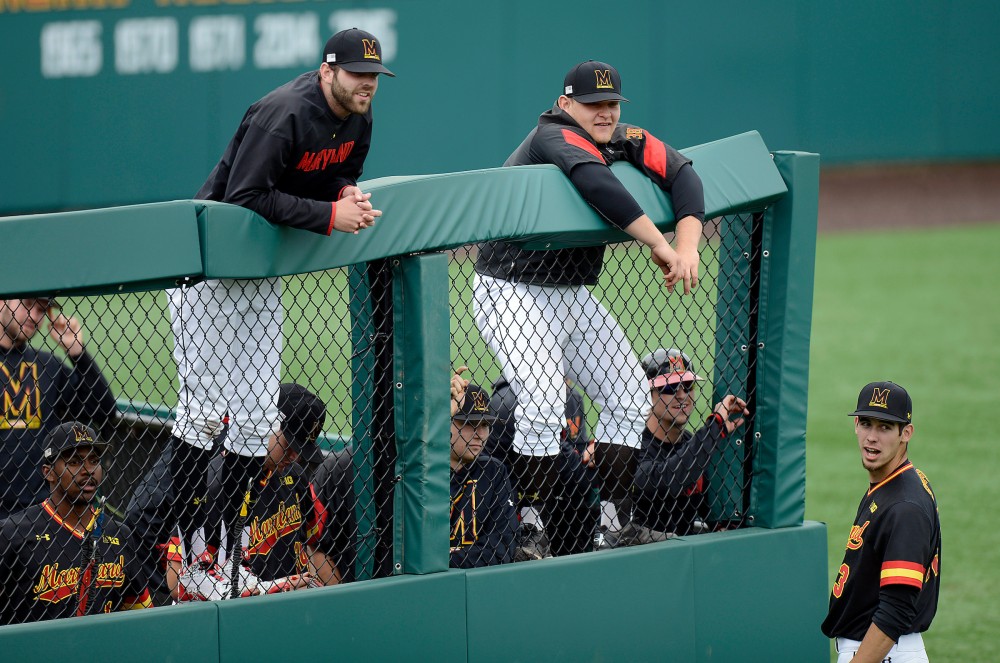 Alex Barclay arrived at Bob “Turtle” Smith Stadium in the summer of 2014 with no expectations.

A few days earlier, his dad stumbled upon an online flyer revealing the Maryland baseball team was holding an open tryout.

Barclay considered his playing days over after rehabbing an elbow injury at Anne Arundel Community College his sophomore year. At Maryland, he just planned to obtain an economics degree.

But Barclay grew up following Terps sports and aspired to wear the red-and-black uniform. His dad, Marc, failed to earn a Maryland baseball roster spot after trying out twice. Barclay would have been disappointed if he didn’t try.

The tryout, which featured about 28 players, lasted two and a half hours, and Barclay exceeded his own expectations. It was the first time he’d thrown a baseball from behind home plate without pain in months. But in the next two weeks, Barclay wondered whether he would make the squad.

When fall practice started at the end of September, though, coach John Szefc invited Barclay to work out with the team. Szefc admired Barclay’s ability to frame pitches, but he already had four catchers.

Now in his final season working with Maryland’s pitching staff, Barclay has set the standard for Szefc’s future bullpen managers. He isn’t receiving an athletic scholarship, or a spot in Szefc’s lineup, but he travels with the Terps and has made the same impact as the starters.

“There’s not a guy that doesn’t love the dude,” associate head coach Rob Vaughn said. “His personality is great, and he’s very unselfish. … He has a thankless job and does a heck of a job with it.”

Barclay’s first word was “ball,” so it didn’t surprise his parents he started playing T-ball when he was 4. With his dad as his coach, Barclay played coach pitch between 7 and 9 years old.

That’s when he made clear he wanted to play for the Terps.

With a top-10 Florida State football team visiting College Park, Barclay and his dad attended what they expected to be a blowout contest. But after the Terps scored the game-winning touchdown, Barclay glared at his dad.

During his dad’s penultimate season coaching, he realized his son had more potential than most of the roster. In one game when he was 11 years old, Barclay blasted two home runs and caught three runners stealing.

Around that time, Barclay attended another Maryland football game — the Terps’ win over then-No. 2 Boston College in College Park. When he was in eighth grade, Barclay was among the fans who rushed the field, touching Eagles quarterback Matt Ryan and Terps wide receiver Darrius Heyward-Bey’s shoulderpads, not realizing he would be standing on the same field for a ring ceremony years later.

Palumbo noticed the team’s pitchers listened to Barclay’s suggestions. He got along with every player despite some hot-headed personalities. After a few practices, Palumbo moved the other catchers to first and third base. Barclay finished the season catching about 95 percent of the team’s games.

“He was always one of the guys who was able to listen to what was going on and see the bigger picture,” Palumbo said. “He wasn’t one of the star players but had a big impact.”

As his junior season progressed, Barclay experienced pain in his arm, curtailing interest from prospective recruiters.

Before Barclay’s senior season, a physician found he suffered a strained ligament. Ignoring what he deemed a minor injury, Barclay prepared for his final high school campaign while more coaches were drawn back by his weakening arm.

Barclay settled on playing baseball at Widener College in Pennsylvania, but his mom, Catherine, sensed his disappointment. He fell short of his goal.

During fall practices at Widener, Barclay’s pain increased. He remained active throughout his first collegiate semester, but after a few spring games, the Widener coaching staff recommended a thorough doctor evaluation.

An MRI revealed Barclay’s ulnar collateral ligament was off the bone and he would need Tommy John surgery, a procedure associated with pitchers. The rehab process can take up to a year, but the Delaware-based surgeon explained to Barclay that if he wanted to continue playing, he would need to undergo the procedure.

In August 2013, he complied. At that point, Barclay was content with just getting a degree at the University of Maryland.

Still, Barclay attempted a comeback. After the surgery, he moved home and attended Anne Arundel Community College for his sophomore year. He drove to Wilmington, Delaware, for follow-up appointments once a month for six months, and tossed with his dad in the spring.

While attending community college, Barclay coached at Archbishop Spalding. He called universities, including this university, begging to be considered for a spot on their baseball team. Any promising conversation ended when Barclay explained he had Tommy John surgery.

When the Terps responded with speculation, Barclay again prioritized academics. He enrolled at this university, and if playing baseball wasn’t realistic, he was content at least.

But then, his dad came across the walk-on sign.

‘THEY WERE ALL LOOKING AT YOU’

Soon after the walk-on tryout, Barclay told his parents he was “on fire.” He felt he blocked and framed enough pitches to impress Szefc and his staff. The following day, he remained hopeful after asking another player who tried out if he had heard from the coach yet.

Though Barclay didn’t earn a roster spot, Szefc was hopeful he would accept the bullpen catching opportunity, a role that isn’t under scholarship and doesn’t include traveling during the first year. Szefc wasn’t sure Barclay would accept the job.

He was happy when he did.

Szefc, who has used just four bullpen backstops over five years, tasked Barclay with catching bullpen sessions because one of the bullpen catchers stepped down.

Barclay caught former right-hander Kevin Mooney in his first practice with the Terps, adjusting to the increased movement and velocity of each pitch. Mooney’s fastball peaked at 95 mph, forcing Barclay to use a batting glove under his catcher’s mitt for the first time.

Barclay arrives to practice at 12:30 p.m. to catch a weekend starter’s bullpen session, lifts weights with the team and then catches pitchers off the mound later in the day. Before games, he warms up with the starting pitcher, and as games begin, Barclay studies opposing teams’ baserunning signs from the dugout.

When assistant coach Ryan Fecteau calls upon a reliever to warm up, the pitcher and Barclay sprint to the bullpen. Fecteau sometimes checks to see which pitches Barclay finds are working best for each reliever. Sometimes, it’s left-hander Tayler Stiles or right-hander Ryan Selmer.

“They all played together on the [12U team], and Alex was the leader of the team,” Barclay’s mom said. “Sometimes I wonder if he is disappointed because he didn’t make the team, but they did.”

Instead of envying his teammates, Barclay established a defined role. He maintains a laid-back atmosphere in the bullpen, throwing balls in the dirt if pitchers mislocate their throws.

He’s established a reputation as the “glove doctor” because he can take apart a glove and rearrange it within a few hours. In the coming days, he’ll re-lace Selmer’s red glove so it features black lacing.

Barclay takes pressure off Maryland’s starting catchers and helps the younger pitchers develop. He isn’t excluded from celebrations, either, such as when he received a 2015 Super-Regional ring.

When center fielder Zach Jancarski and first baseman Brandon Gum hit consecutive home runs in the ninth to help Maryland top Penn State on April 14, Barclay’s mom estimates her son ran from the bullpen to the plate in about two seconds.

“Looking back 10 years from now and saying, ‘Oh, I was part of that Maryland baseball run for a little bit,'” Barclay said, “is just awesome.”

As Barclay left the hospital following the Tommy John operation, his mom reviewed the paperwork explaining he received donor tissue. Because the donor couldn’t have had health issues, she learned the donor is often a young person who died tragically.

While Barclay’s morale remained low the week after the surgery, his mom reminded him someone lost their life while he was receiving a second chance at a baseball career.

She said she’s drafting a letter to the anonymous donor family to express her gratitude. And as Barclay hopes to guide the Terps’ pitchers to the team’s third Super Regional in the past four years, he isn’t taking the opportunity for granted.

“He’s pretty unselfish,” Szefc said. “He understands the role he has is important. It’s not like we have guys lining up for that role.”