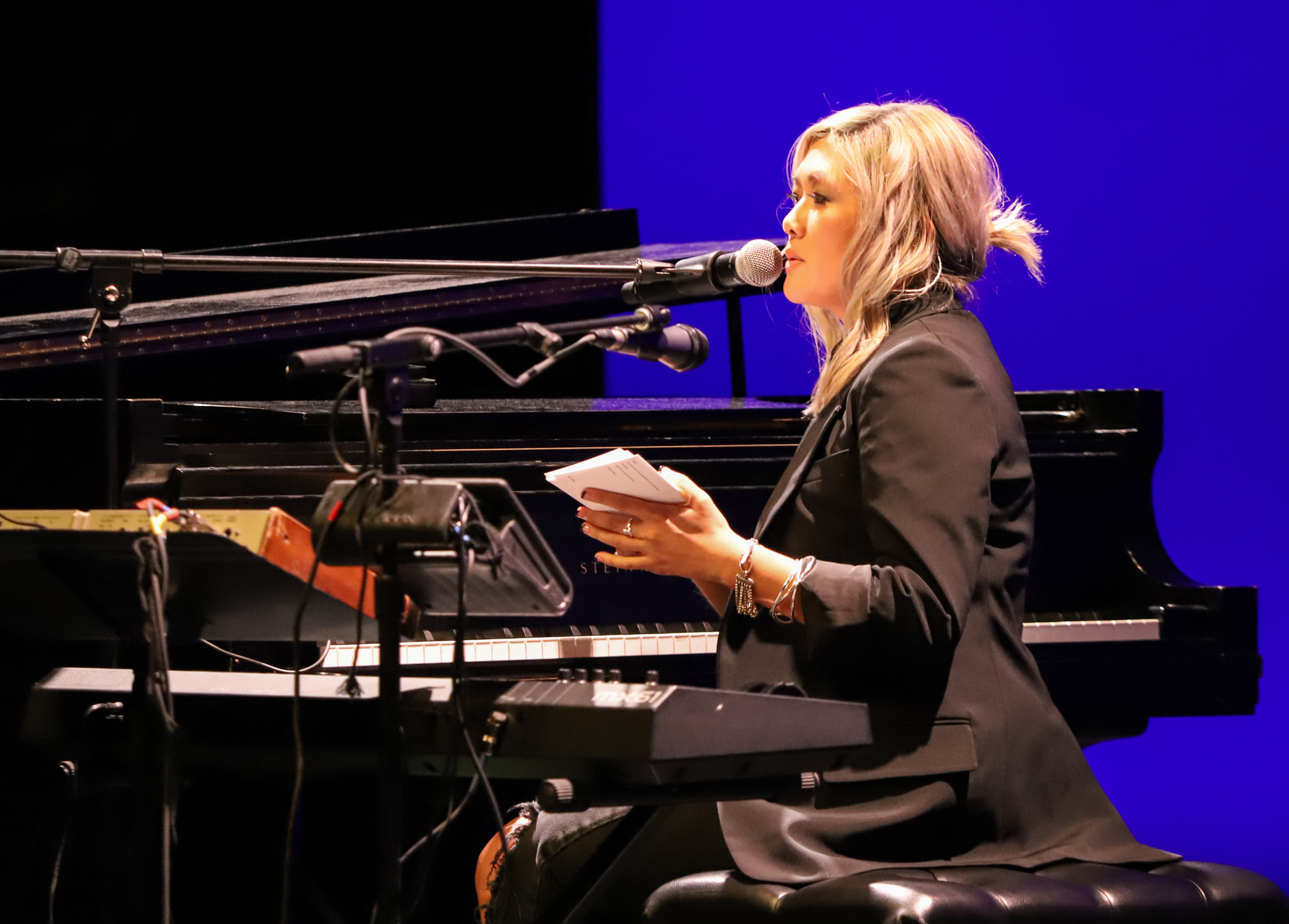 Connie Lim, better known as MILCK, silently walked onstage and took a seat at her keyboard. The title of the singer’s hit song “Quiet,” which unintentionally became an anthem at the Women’s March in January, contrasted with the power of MILCK’s loud voice. Her Friday night set during The Clarice Smith Performing Arts Center’s NextNOW Fest was a hybrid of discussion and song, brimming with stories, tears and laughs.

MILCK was accompanied by a single guitarist — longtime friend and collaborator Rod Castro, who also provided minimal backup vocals. The chemistry was obvious, with the pair exchanging short, knowing glances and smiles throughout the set. The stage was lit with a rotating array of solid colors, appropriately aligning with the moods and themes elicited by the sound. Purples, blues, greens, white. Her menacing performance of “Devil Devil” was accented by a rich red.

“As you can tell, I’m kind of emo,” she joked, wearing an all-black ensemble.

Poise and power characterized MILCK’s presence on stage. Her face often donned a concentrated frown. She swayed when approaching the pinnacles of her music, and when she wasn’t on the keys, her fingers fidgeted in the air. On “I Don’t Belong to You,” she played the piano with one hand and the keyboard with the other. Her voice ranged between higher and lower notes, crescendos and decrescendos.

“It was invigorating and just lovely … a lot of tears, too,” said Zoey Warecki, an engineering and materials science doctoral student. “I like that she can do classical piano, but also some electronic and keys and reverb.”

The consistent theme was liberation. “I Don’t Belong to You” is a fierce, valiant deliverance from toxic relationships. “Devil Devil” chronicles the release of inner demons. “Black Sheep” reminds us that being yourself shouldn’t be conditional.

“There’s a lot of crazy stuff going on in the world, and I think a lot of it, we have so much access to it so quickly, so I always try to remind myself, ‘OK, this is not the end,'” she said before her performance of “The End.”

In a Q&A session following the music, Lim expounded on these short bites of her experiences, taking a moment to chronicle the start of her artistic journey. By the age of eight, Lim was enrolled in opera and piano classes.

However, she told the audience she often thought being a singer was inappropriate, as she was raised in a family of doctors. In college, she interned at an investment banking firm, where she worked 12 hours a day, wearing a suit and entering values into Excel. She eventually quit, realizing that she could no longer justify suppressing her dreams.

“I was like, ‘Oh, everyone has that thing that they really wanna do, but they just deny it, and then you just do what everyone else does. That’s life,'” she said.

After eight years as an independent artist, the California native signed a deal with Atlantic Records in May, just months after garnering attention for her song “Quiet” — a vow to speak out, irrespective of consequence.

The song’s success after its January release was highly unexpected. Her management wanted her to hold it until she found a label, but she credits her intuition with ignoring that advice and letting the piece be heard.

She performed the song during the final flash mob in a series at the Women’s March in Washington, D.C., alongside 25 a cappella singers that she rallied together about a month in advance. “Quiet” was cycled around by way of cell phone videos. It hit the internet, making its way to celebrities, such as Tegan and Sara and Emma Stone, as well as publications such as Vice, Buzzfeed and NPR.

It was how new fans like Warecki, who attended a sister march in New Mexico, found her. Emma Walz, a freshman biology major, attended the D.C. march, and MILCK’s name was the only one she recognized on the NextNOW lineup.

“Most of her songs talk about self-love and self-confidence,” Walz said. “It’s really inspiring. I felt like crying.”

Ryan Dott, a sophomore architecture major, learned of her through his women’s studies professor, who recommended the class see Friday’s show.

“A lot of people want to say stuff they’re not able to say,” he said, adding that the performance was “wonderful, fantastic, no complaints. It was poignant, fantastic artistry, but the message was still strong.”

These feelings of inspiration are what MILCK aims for in her music.

“I’m hoping the more storytelling I can do, it will inspire others to tell their stories from their own perspectives, and we can convince the rest of the world that we are all the same in our uniqueness,” she said in an email.

The concert concluded with “Quiet,” which the singer said has allowed her to connect with women all over the world who have shared their vulnerabilities with her. She created the #ICANTKEEPQUIETFUND, which she said is dedicated to “changing and building and helping communities.”

MILCK plans to release an EP in January, with one of the tracks scheduled to come out in October. A full album and tour are expected in late 2018.