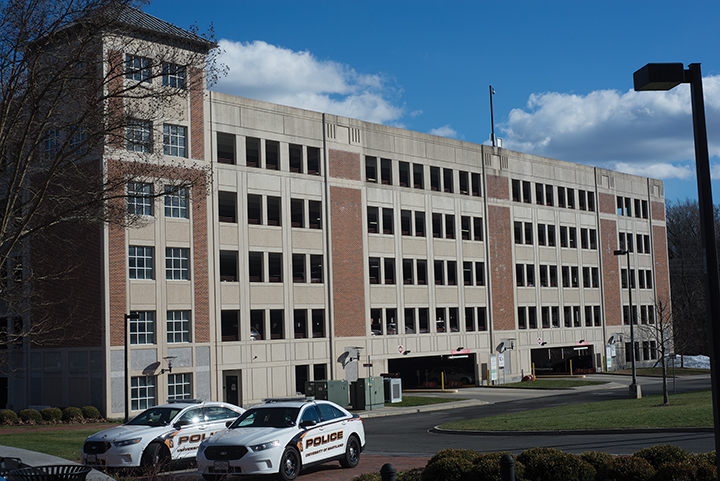 Mowatt Garage, one of the proposed locations for solar panel installation on campus.

Out of the 39 reports of bike theft filed this semester, 32 can be attributed to this juvenile suspect, Hoaas said. The earliest report of bike theft he’s connected to was placed on March 17, she added.

Twenty-three of 28 reports of bicycle theft in April can be attributed to the juvenile, she said. He’s also responsible for all nine bike theft reports in March, she said.

“If you have someone who’s determined — ‘I’m gonna steal this bicycle’ — they’re going to go for the easy targets,” she said. “Regardless if you’re a juvenile or an adult, you’re still committing a crime.”

The suspect was caught on May 1 at 1:45 a.m., when personnel from the police’s Security Operations Center noticed two individuals in the Mowatt Lane Garage “possibly tampering” with bicycles, Hoaas said.

Officers responded to the area and located the two suspects, who were riding bicycles near the garage, she said. The juvenile was accompanied by an adult man.

One of the bicycles they were riding was stolen from the campus, Hoaas said. The juvenile said that the other bicycle was taken from an off-campus location. Both bicycles were taken into the police department for safekeeping.

“The juvenile admitted they were trying to steal bicycles,” Hoaas said. “He had a pair of bolt cutters with him as well.”

After being taken back to the station to speak with detectives, the juvenile confessed to stealing 32 bicycles, she said, four of which are valued over $1,000. The juvenile was released to a guardian after the meeting with detectives

The adult man was released and issued an immediate denial of access to the campus; he will be arrested if he comes back onto university property, Hoaas said.

The report has been submitted to the juvenile court system, and an official court date will be determined at a later time.

A team effort led to the juvenile’s capture, Hoaas said. The Security Operations Center monitors the bike racks around campus, in addition to data collected by the department’s Information Analysis Unit, which also helped determine where the thefts were happening most frequently.

“There was a lot of work going on behind the scenes to narrow down who this individual was,” Hoaas said. “We could focus more on where these incidents are occurring and allocate our resources accordingly so we’re not going on a wild goose chase.”