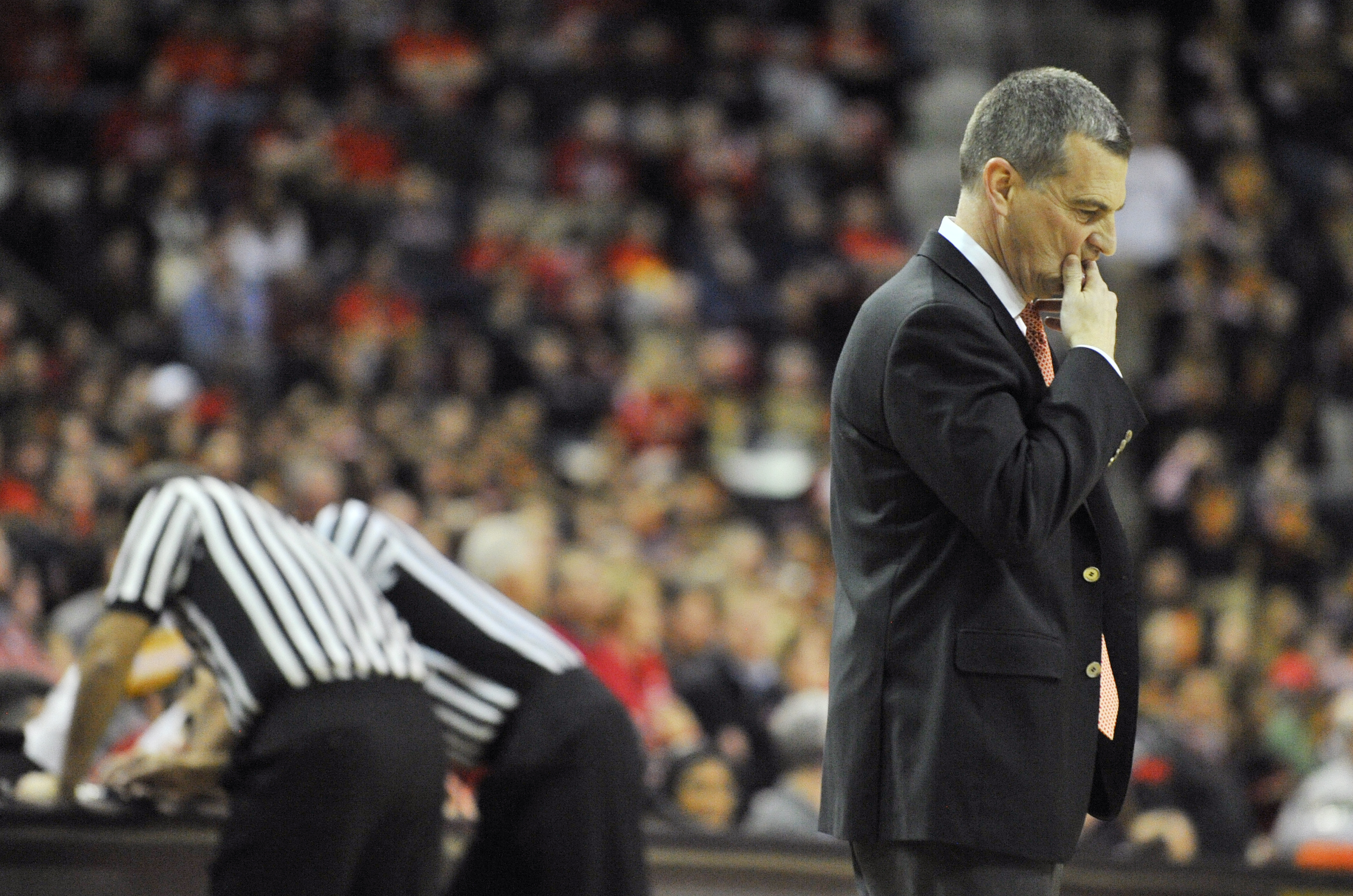 Head coach Mark Turgeon rubs his face as referees discuss the "scuffle" between Wiscosin forward Charlie Thomas and Maryland center Diamond Stone when the Terps lost to Wisconsin, 70-57, at Xfinity Center on Feb. 13, 2015.

Mark Turgeon struggled to find the right words Thursday night. With Minnesota ‘M’s’ dotting the canvas behind him, the Terrapins men’s basketball coach took long pauses during his press conference, unable to quite figure out why his team marked the end of the Golden Gophers’ 14-game losing streak.

There were parallels to his postgame press conference from five days earlier when the No. 6 Terps suffered their first home loss since 2014.

“We kind of lost ourselves during a stretch,” Turgeon said, echoing his phrasing for the first half of Saturday’s loss to Wisconsin.

Late Thursday, Turgeon didn’t have the answer for why his team laid an egg in the opening 20 minutes for the second straight game. But the fifth-year coach is hoping he can figure it out before Michigan (19-8, 9-5 Big Ten) visits College Park on Sunday.

A game after the Terps (22-5, 10-4) allowed Wisconsin to end the first half on a 29-7 run, Turgeon’s squad surrendered 40 first-half points to Minnesota. As a result, the Terps went into the locker room trailing by double digits for just the second time this season.

Forward Jake Layman attributed the deficit to the Terps defense, which has been stout for most of the season. But they allowed Minnesota to shoot 46.7 percent in the opening period, including 53.8 percent from beyond the arc.

“We have so many scorers that if we defend, even if we are missing shots, it’s going to be on our side no matter what,” Layman said. “Our defense in the first half needs to get a lot better.”

Against Wisconsin, the Terps allowed 36 first-half points and entered the break trailing by 15 points, their largest halftime deficit of the season. The inability to get consistent stops plagued an offense that went more than eight minutes without scoring.

While the start against Minnesota wasn’t as bad, the Golden Gophers took a double-digit lead with 4:31 left in the opening period.

“Every game in this league going forward, you can’t have starts like that,” said guard Rasheed Sulaimon, who scored a career-high 28 points. “You just put too much pressure on yourself and on your team. Even though we played great in the second half, because of the deficit in the first half, it wasn’t enough to come back.”

The Terps held Minnesota to 20 percent shooting after the break and forced the Golden Gophers to miss 14 of their final 15 shots. But the first-half struggles proved costly as the improved defense still wasn’t enough to prevent the Terps from leaving Williams Arena amid a court storming.

Turgeon said part of the problem was they weren’t able to make the appropriate defensive changes during the first half.

“We got to listen a little bit better and make our adjustments a little bit quicker,” Turgeon said. “Can’t wait till halftime.”

Over the past two seasons, the Terps have been terrific closing out close games. But the past two contests, they’ve been forced to play catch-up for the entire second half.

When the Terps met Michigan on Jan. 12, they trailed by eight at halftime and by as many as 13 in the second half. So as they look to avoid their first three-game skid since 2012, they’ll attempt to avoid another slow start.

“I got to figure out a way to get us going again,” Turgeon said. “We’re not ourselves.”