Twitter banned Milo Yiannopoulos for racist tweets. Terps for Trump will host him at UMD. 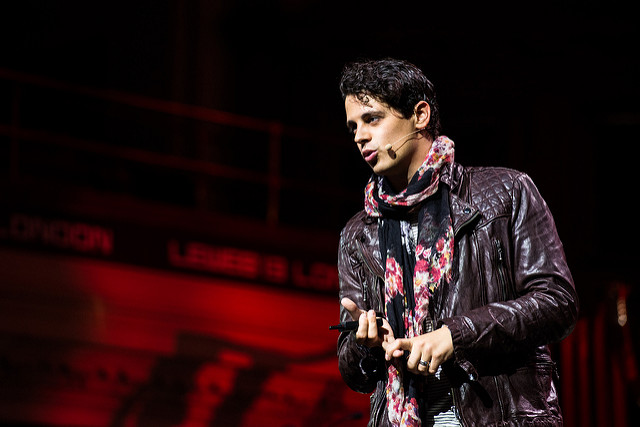 Editor’s note: After this article was published, a Terps for Trump representative requested the article be retracted pending the event’s formal approval. The Diamondback does not retract factually correct articles. This has been updated to reflect that the event details initially reported require approval from university officials, though an eventbrite.com page promoted on Yiannopoulos’ website also lists these details.

University of Maryland student group Terps For Trump has agreed to host Breitbart Journalist and Technology Editor Milo Yiannopoulos after being contacted by his team, said Shubham Chattopadhyay, a Terps for Trump member.

This visit will be a part of Yiannopoulos’ nationwide college speaking tour, called the “Dangerous Faggot Tour,” where he talks to students about various controversial issues, Chattopadhyay said. The event is still pending approval from university officials, though Yiannopoulos’ official website lists a tour stop at this university on Oct. 26.

“Considering that [Yiannopoulos’] values align with what [Terps For Trump] kind of stands for, we decided that it would be a good idea to have him come,” said Chattopadhyay, a sophomore computer engineering major.

Yiannopoulos is most known for making disparaging remarks against the Black Lives Matter movement, feminism and birth control — stating that the latter makes women “unattractive and crazy,” according to an article he wrote for Breitbart News last year.

In July, Yiannopoulos was permanently banned from Twitter for targeting actress Leslie Jones with a series of racist tweets, according to the Washington Post. His permanent ban was the social network’s strongest response against someone who breaks the abuse and harassment policy, the article said.

Residence Hall Association President Steve Chen said he is happy that the Terps For Trump group wants to bring people to the campus — as long as they do so in a respectful and civil manner.

“Them inviting this controversial speaker is a statement and I would encourage the leaders of that group to really think about whether or not the invitation that they accepted really fosters dialogue and really moves the conversation forward,” said Chen, a senior biology and global health major.

Though there will be people who don’t agree with Yiannopoulos’ rhetoric, UMD College Democrats President Jake Polce said it’s nice to have people from all over the political spectrum come to the campus.

“I won’t agree with anything that [Yiannopoulos] says when he comes, but I definitely think it’s [Terps For Trump’s] right,” said Polce, a junior government and politics major.

Although he expects students to protest at the event, Chattopadhyay said they are welcome to join in on the conversation if they’d like.

“Really the best thing to do is to give [the protesters] an open platform to voice their concerns and then debate them then and there,” he said. “That is what Milo has consistently done throughout every single one of his tours so far … if anyone has a problem with what he is saying, he will invite them to come up and debate with him.”

Yiannopoulos’ tour has sparked outrage at other universities — such as Rutgers, DePaul and the University of Oregon, among others — prompting students to protest through the use of air horns, human barricades and even fake blood.

Polce said Yiannopoulos’ visit could end up being the most important thing to happen on this campus.

“If you’re on the fence [of attending the event], I think it is really important to go,” Polce said. “This could be the best thing to motivate students to vote for Hillary and make sure that Donald Trump is never elected president of the United States.”

SGA President Katherine Swanson said she is not surprised Terps For Trump invited someone like Yiannopoulos to come speak on the campus this close to the election.

“My only thoughts on this is that they are a political group and it’s natural for this to cause controversy, as would a lot of other political speakers at this time this close to the election,” said Swanson, a senior government and politics major.