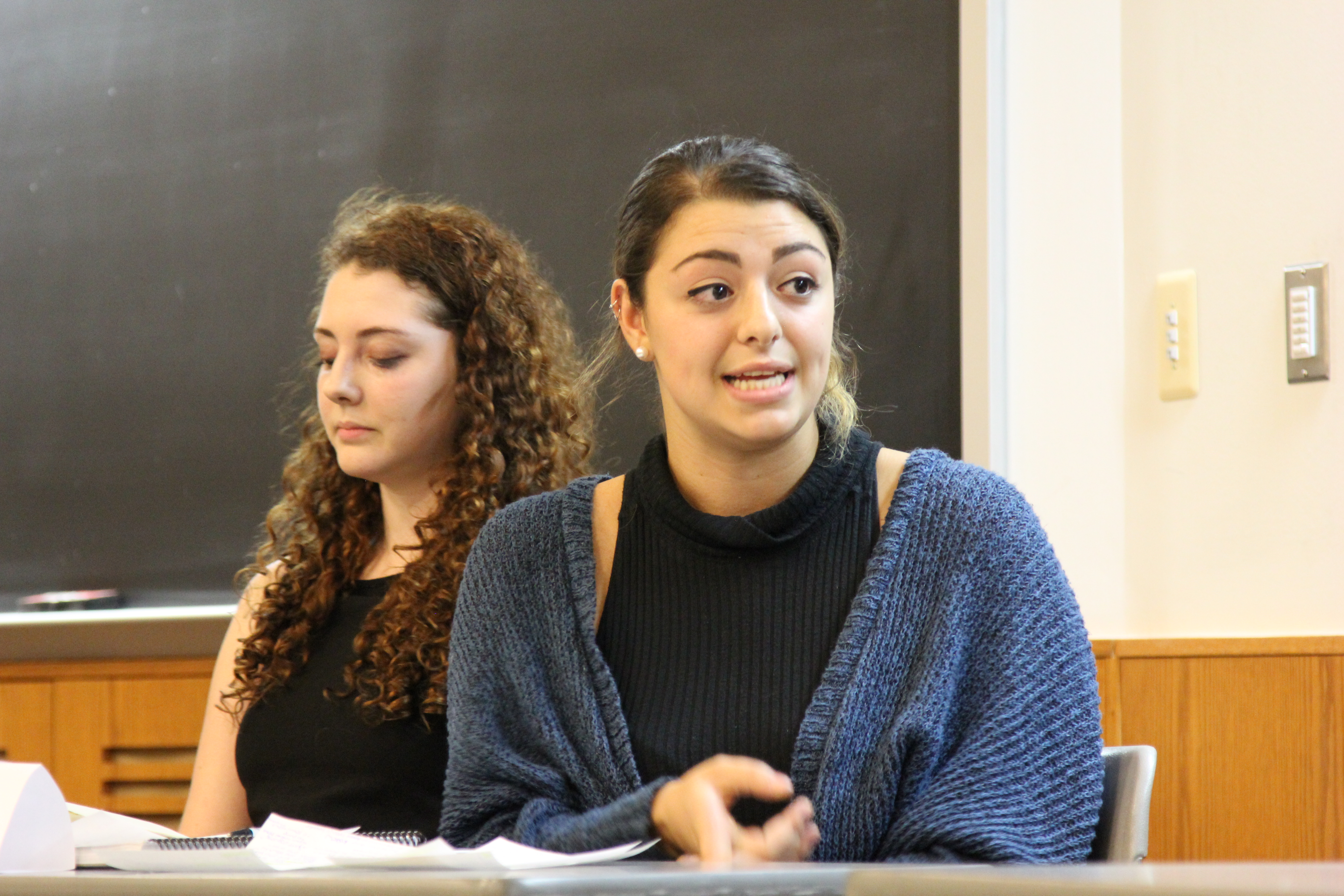 Meredith Lightstone, a senior government and politics and global health major and Terps For Hillary co-president, said she thought it was “reflective of the authentic debates in which facts were rare and personal insults went wild.”

The 90-minute debate, which Maryland Discourse hosted, began with opening statements, in which Gary Johnson representative and Young Americans for Liberty president Yusuf Mahmood referred to Donald Trump and Hillary Clinton respectively as a “brown-shirted fascist and a corporatist war profiteer.”

After opening statements, each team — made up of two student representatives — was asked a question directed toward their specific candidate. Each team was asked about four questions, and had a 30-second chance to respond if another team mentioned their candidate.

Terps For Hillary went first.
“From Whitewater, to travelgate … to Benghazi, to the Clinton Foundation, to the private email server, Hillary Clinton’s political career has been punctuated by frequent scandal. Why should voters trust her?” moderator Joseph Chuzhin, a junior economics major, asked.

“She was never indicted,” Kutzen said. “Nothing has really come … [from] any of those scandals.”

Supporters of the Libertarian party were then asked why voters should cast their ballots for a third party.

“In states like Maryland where we know for a fact that Hillary Clinton is going to win, the only vote that matters is a vote for Johnson,” Mahmood said. “Because if Gary Johnson reaches five percent nationally … of votes, he’ll get [federal] funding.”

He added that in a swing state, voters will “not have blood on [their] hands” if they vote for Johnson instead of Trump or Clinton.

“These two candidates, as we will hopefully learn throughout this debate, are some of the most disgusting, despicable people who have ever run for president of the United States,” Mahmood said, a comment that elicited some quiet laughs from the audience.

When asked about its candidate’s distrust of evidence and professional opinion when making foreign policy decisions, Terps For Trump highlighted the newest batch of leaked Clinton emails.

“Just last Friday, the FBI reopened Hillary Clinton’s email investigation, which Trump has been saying was criminal for quite a long time and the media has failed to recognize that fact,” Terps For Trump president and junior mechanical engineering major Matt Morris said in response.

Throughout the rest of the debate, panelists were asked questions on national security, healthcare and job growth. Terps For Johnson almost exclusively attacked Clinton, until a short question-and-answer session at the end.

“A lot of Americans, especially young Americans, are just coming into the workforce and cannot simply afford to pay the premiums. The system is completely failed,” said Terps For Trump representative Shubham Chattopadhyay, a sophomore computer engineering major. “Trump’s biggest plan here is to repeal the Affordable Care Act [and] let the free markets run their course … so cut [monopolies like insurance companies] by making sure that you can buy insurance plans across state lines so that way it will drive prices down naturally.”

The Johnson supporters called Obamacare policies “protectionist” and an inhibitor for getting necessary healthcare, citing the high costs of EpiPens.

When the floor opened for questions, an audience member brought up Trump’s lewd comments about women.

“This is going to go badly for me,” Chattopadhyay said before addressing the question. “There are more important things than what a billionaire does in his private life.”

After the debate, Lightstone called the election “infuriating.”

CORRECTION: Due to a reporting error, a previous version of this story identified Christian Knapp as the debate’s moderator. The moderator was junior economics major Joseph Chuzhin. This article has been updated.