Al Gore speaks at UMD on future of climate action 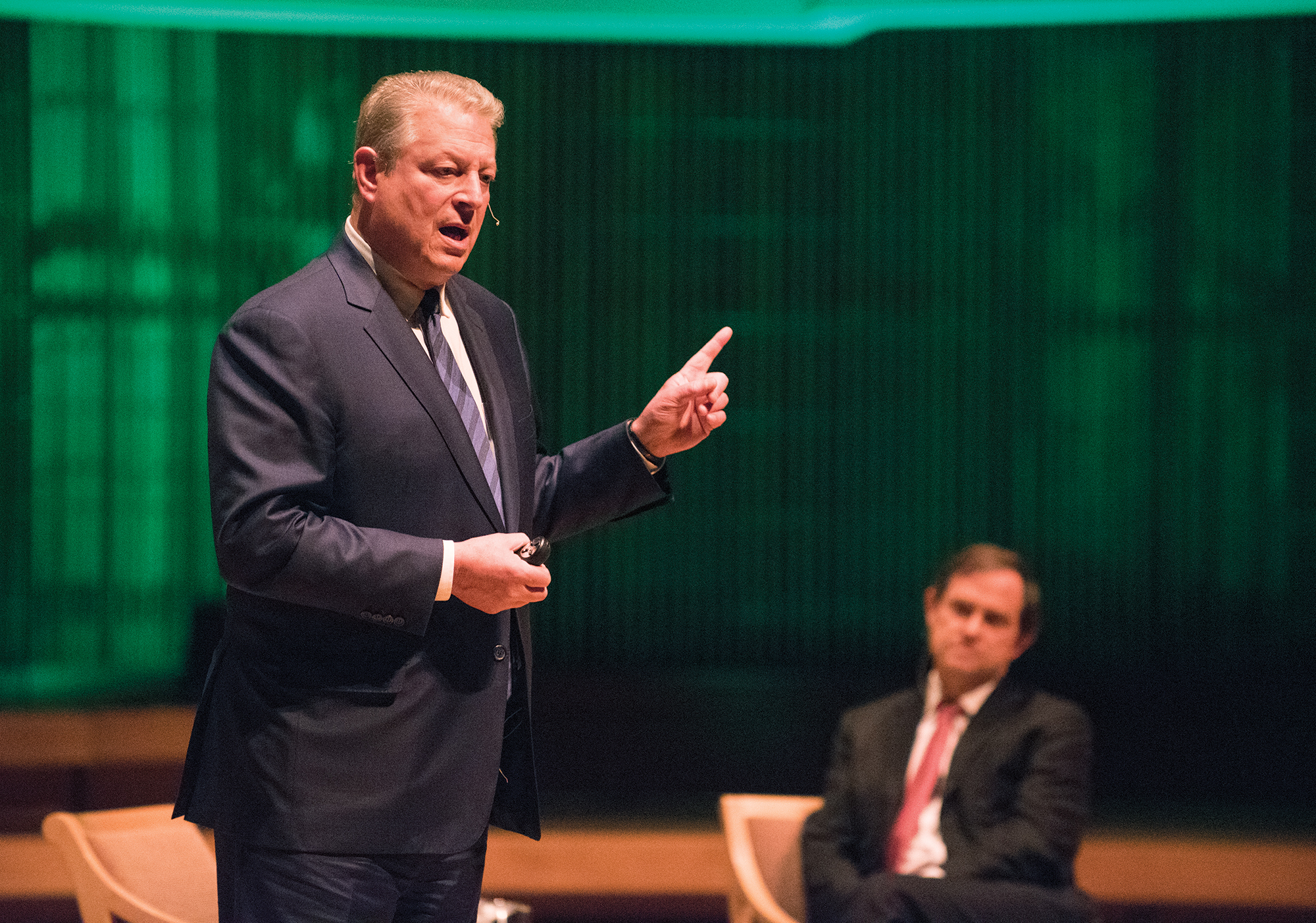 Former Vice President Al Gore speaks on the future of climate action in the Dekelboum Concert Hall in the Clarice on Mar. 1, 2016.

Former Vice President Al Gore spoke to University of Maryland students about the future of climate action in the Dekelboum Concert Hall at the Clarice Smith Performing Arts Center on Tuesday.

The public policy school hosted the event to celebrate the launch of the Center for Global Sustainability, according to its website. Robert Orr, the dean of the school, invited Gore to the university in response to last year’s Paris Agreement, a United Nations Climate Change Conference plan to reduce greenhouse gas emissions, Orr said.

Gore said the desire to foster change is a pivotal tool in protecting the environment.

“Today’s students in college and younger are eager for the kind of challenge that our world now faces,” Gore said. “The will to change is in itself a renewable resource.”

“I’m here today because Al Gore is one of my heroes,” O’Malley said. “I care passionately about climate change and the urgency of our taking action to confront it. I wanted to be here to hear him once again.”

The Paris Agreement was “virtually every nation in the world [agreeing] to work together to eliminate all greenhouse gases,” Gore said.

Gore spoke to the audience about “the three most important questions” about the climate crisis: whether people have to change, if they can and if they will.

Throughout his presentation, Gore cited what he called irrefutable evidence of climate change. He said the cumulative amount of pollution in our atmosphere traps as much extra heat every day as would be released by 400,000 Hiroshima-class atomic bombs going off every day.

Additionally, ocean temperatures have been increasing dramatically, causing problems such as stronger ocean-based storms, deeper and longer droughts, and pandemic diseases such as the Zika virus, he said.

The climate crisis is no longer “a linear phenomenon: one cause, one effect,” but influenced by systemic causality in which one factor influences another but is not a direct cause of it, such as when global warming causes large storms to become catastrophic, he said.

Gore also said the climate crisis is “now a global medical emergency” and “the number one threat to the global economy.”

The question of whether the world can change is becoming more and more positive because costs are getting lower, and innovators are making exponential growth in technologies such as wind power, solar power and lithium-ion batteries, Gore said.

“We are seeing the unleashing of a breakthrough revolution,” Gore said. “What has happened in the last decade is absolutely stunning.”

However, Gore said he looks forward to seeing the progress actually effecting change, especially because “many students around the world and in this country are demanding change,” he said.

“When the [question] becomes a choice of what is right and what is wrong, the outcome is fore-ordained,” Gore said.

Rebecca Wolf, a sophomore enrolled in letters and sciences, said she attended the event because she thought Gore would share important information about this overwhelming issue.

“It’s awesome that I can attend something where someone who’s really important has some serious information he can tell me about,” Wolf said.

University President Wallace Loh also attended the event. He said Gore has “helped make this existential issue of the future of the planet and of civilization as we know it at the forefront of the critical issues of our day.”