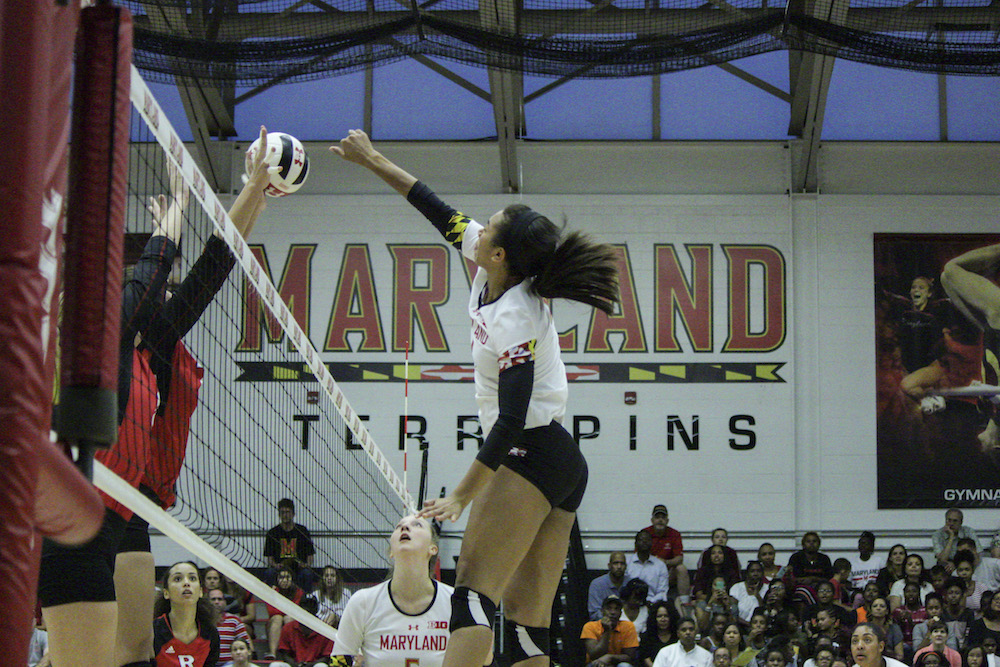 During Maryland volleyball’s opening weekend in North Carolina, the Terps’ attack didn’t reflect the precarious offseason for their outside and opposite hitters.

Four of Maryland’s top five attacking options from 2017 transferred or graduated following the season, and coach Adam Hughes, who took over in January, needed to add depth to cover for fresh holes in his squad.

But that turbulence wasn’t on display as the Terps secured wins over Wake Forest and UNC Greensboro and dropped a five-set shootout against Air Force. Over those three matches, Maryland notched 14 more kills than its foes and had a better hitting percentage by more than 10 percentage points.

In Akron for their second three-match weekend, the Terps look to continue those trends to have another successful tournament.

“It’s about staying aggressive and being mindful of when the set isn’t there,” outside hitter Erika Pritchard said. “It’s just staying the aggressor.”

To increase efficiency during games, Pritchard said that building chemistry with clean practices helped increase confidence in games early in the year. That connection has led to Maryland’s .263 hitting percentage.

Pritchard and middle blocker Jada Gardner lead the Terps with 44 and 38 kills, respectively. Setter Nicole Alford, another new addition for Maryland, leads the squad with 114 assists.

“When we are having good passes and the sets are good, it gives us the ability to hit well,” Gardner said.

While Pritchard’s call for an aggressive attack has helped Maryland jump out to two straight-sets wins, Hughes calls for a balance for his team. He said he wants the Terps to “take advantage of what’s given to us” without pressing.

“It’s like a quarterback — sometimes you’ve got to throw it away instead of turning it over,” he said.

Gardner echoed her coach, saying that the Terps have to work hard to toe the line between being too passive and sloppy.

“It’s definitely a balance,” Gardner said. “We have three shots. One where we swing away, another, which is challenging, and another that is just to keep it in play.”

The Terps impressed from open play during their 2-1 start, but their opponents often held the upper hand from the service line. Maryland had 13 aces compared to 23 errors, a ratio of 1.2 aces per set while foes average 1.8 aces per frame.

Hughes said he hopes the Terps’ service game improves during this weekend’s tournament against Akron, Stony Brook and Canisius.

“Serving is probably the one thing we are trying to improve on this year,” Hughes said. “We want to not give up so many errors and also get enough pressure to keep people from using all the options they have.”

With three matches this weekend, Maryland has an opportunity to continue its clean attacking play as the Big Ten slate approaches in mid-September.

“You play yourself for three weeks, but until you play someone else, you don’t learn a lot,” Hughes said. “Everytime we play, no matter who the opponent is, it’s a good opportunity for them to learn how to play together.”