“We were out of sync”: Penalties clutter Maryland football’s loss to Minnesota 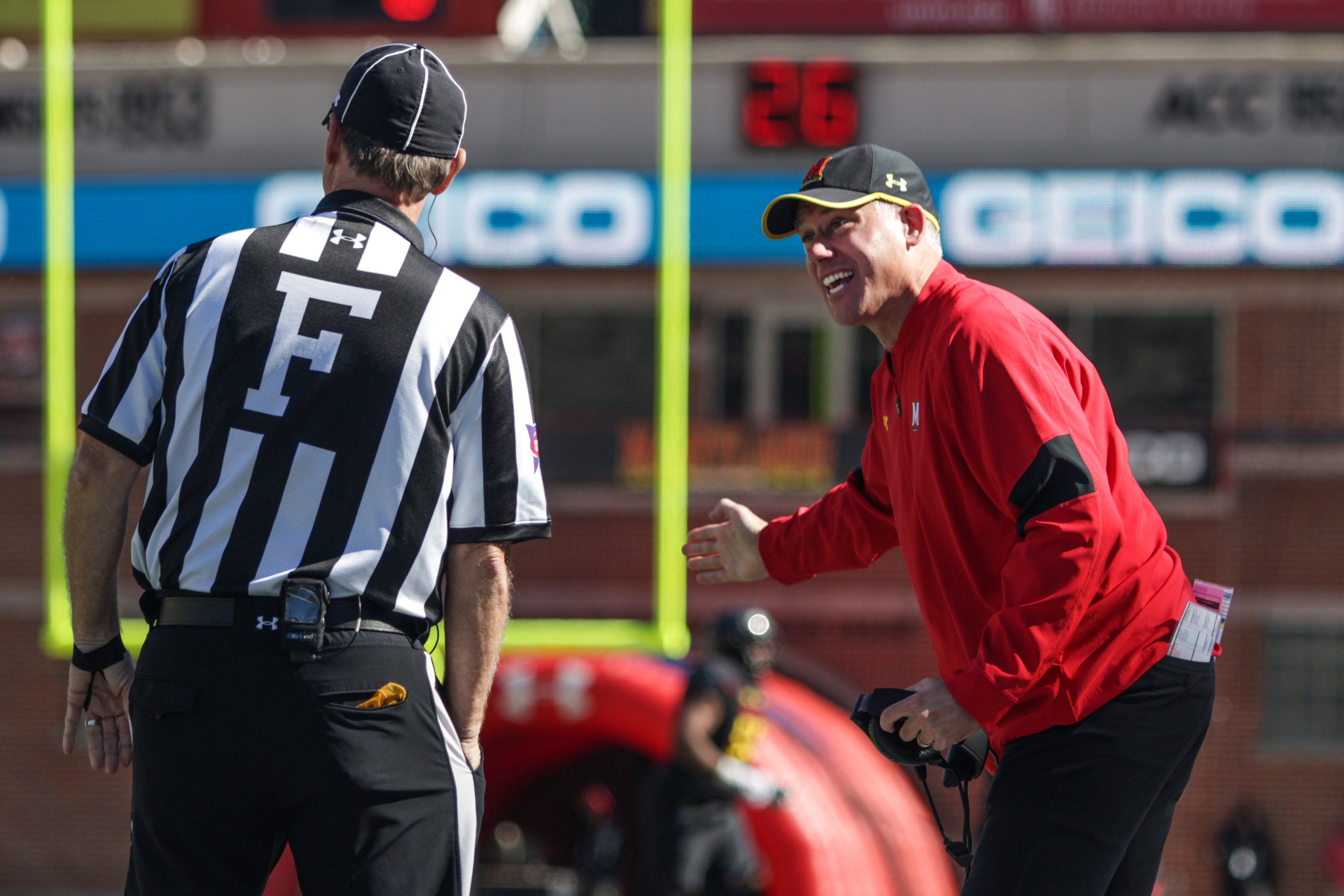 Midway through the second quarter Saturday against Minnesota, Maryland football running back Lorenzo Harrison took a pitch in the backfield and scampered around the left side of the line.

He shed one Minnesota tackler and juked two more. Then he faked another two, cutting up field and weaving behind a block from wide receiver D.J. Moore, who pushed his defender to the ground.

With seven opposing players trailing him, Harrison barreled to the 48-yard line before a diving Golden Gophers player caught the freshman’s cleats and tripped him up 13 yard past the conversion line on 3rd-and-20.

But as Harrison stood up, coach DJ Durkin swung his arm in frustration and ripped off his headset as he argued with the referee’s call — holding on Moore — that erased Harrison’s effort, one of their nine penalties in the 31-10 loss.

“You go get a long run [and] there’s a holding penalty, so there’s no tempo,” Durkin said. “You lost that aspect of what you have going on, so it was just like we couldn’t ever really get on track. We were out of sync.”

The Terps’ nine fouls cost them 75 yards in a game they finished with 291 yards on offense. Five of the calls were holding penalties, three of which came in the second quarter after Minnesota took a 7-0 lead.

Two plays after the Golden Gophers’ score, quarterback Tyrrell Pigrome, making his first career start in place of quarterback Perry Hills (shoulder), kept the ball and darted about 30 yards through the right side of the line on 2nd-and-13, igniting cheers from the announced 41,465 fans in the Maryland Stadium crowd.

Offensive lineman Damian Prince’s hold negated the play, though, and he committed a false start on the ensuing snap. After failing to convert on 3rd-and-21, Maryland punted.

The long downs and distances on offense, the Terps said, put the unit at a disadvantage against a Minnesota defense focused on limiting Pigrome’s space to run.

The two defensive fouls came with the Golden Gophers deep in the Terps’ territory. Defensive back Tino Ellis jumped offside when Minnesota attempted to convert 4th-and-1 from Maryland’s 22-yard line, positioning the Golden Gophers to take a 14-0 lead seconds before halftime. Durkin slammed his fists down.

The freshman made contact behind Still before the ball arrived and lifted his arms up in frustration upon seeing the flag. Minnesota gained 10 yards and a fresh set of downs, while Durkin paced the sideline and talked to the official.

His temper peaked on the Terps’ next possession.

On 3rd-and-20, Pigrome dropped back and unleashed a deep pass for Moore down the left sideline. A Minnesota defender appeared to push the sophomore as the two were tangled up, but the referees didn’t throw a flag as Pigrome’s pass sailed about five yards past him.

The first-year coach sprinted down the sideline to argue the non-call as the fans booed, wanting a flag on a day the Terps drew their second-most of the season.

“We want to be a disciplined football team,” cornerback Alvin Hill said, “so we don’t really want to have those mistakes and hurt ourselves.”