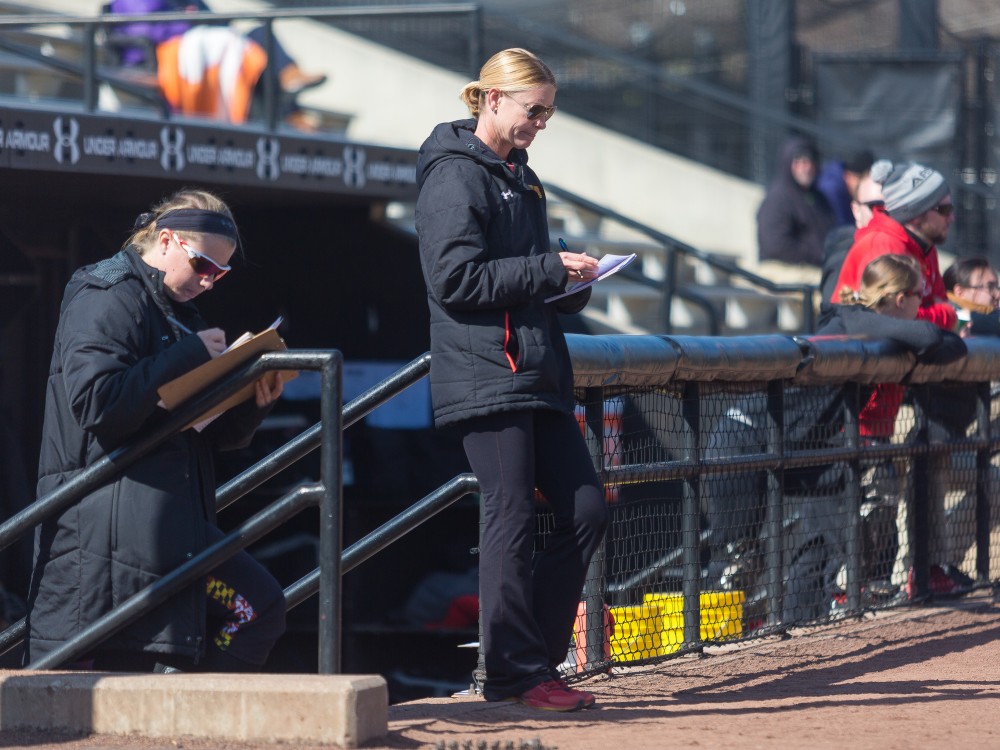 In Michigan’s series-opening 6-0 win over Maryland softball Friday, Michigan ace Meghan Beaubien was dominant, holding the Terps to just two baserunners and one hit. She struck out seven and didn’t issue a walk.

On Sunday, she was even better.

Beaubien, a freshman, threw her third career no-hitter in the 8-0, six-inning win. She fanned 11 Terps, allowed just one baserunner — via a sixth-inning walk — and needed only 69 pitches to finish the complete game.

“She throws the ball hard, and she has a really exceptional changeup,” coach Julie Wright said. “So when you’re trying to gear up and be on time and she throws the changeup, she’s really tough to hit, especially for left-handed hitters.”

The game was Maryland’s third consecutive blowout loss to the Wolverines, and it unfolded similarly to the first two, with the Terps being outperformed in all facets.

Even when Maryland (18-30, 7-10 Big Ten) managed to put the ball in play against Beaubien, it was rarely hit hard. The Terps put the ball out of the infield only once Sunday, after managing two Friday.

“We were working a lot trying to see her pitches down in the zone, but she works with really good deception,” third baseman Brigette Nordberg said. “She worked a lot of changeups in on us, so hats off to her because she was really good this weekend.”

“It’s just leaving the ball up,” Wright said. “You can’t leave the ball up to big-time hitters. They’re going to hit it hard.”

Maryland’s defense, which made a sudden turnaround to power the team to its best-ever Big Ten start a few weeks ago, continued its regression. The Terps made four errors Sunday, bringing their weekend total to 11. For the third game in a row, defensive miscues allowed at least two unearned runs to score for the Wolverines.

Michigan’s batters were relentless, going 7-for-13 with runners on base and 5-for-8 with runners in scoring position.

The Wolverines jumped in front right away. After Beaubien struck out the side in the top of the first, second baseman Faith Canfield led off the bottom of the inning with a home run. Michigan added two more runs in the second on another homer by designated player Lou Allan. Two more runs in the third — both unearned — and two more in the fourth pushed Michigan’s lead to 7-0.

Had the Wolverines scored a run in the bottom of the fifth, the run rule would have taken effect and Beaubien would have had a perfect game. Instead, Denhart put up a zero — just the fourth of the series — and center fielder Kassidy Cross worked a two-out walk in the sixth to end Beaubien’s bid for perfection. She ended the inning with a fielder’s choice.

The trip to Ann Arbor is Maryland’s third consecutive sweep in a weekend series. The run-rule loss is the Terps second in a row and their fifth in the last 13 games; they’ve allowed at least six runs in six of their last seven games.

“When you’re facing good hitters, that’s tough on a pitcher,” Wright said. “That’s something we’ve talked about, and will continue to talk about, that we need our defense to play better so our pitchers can relax.”