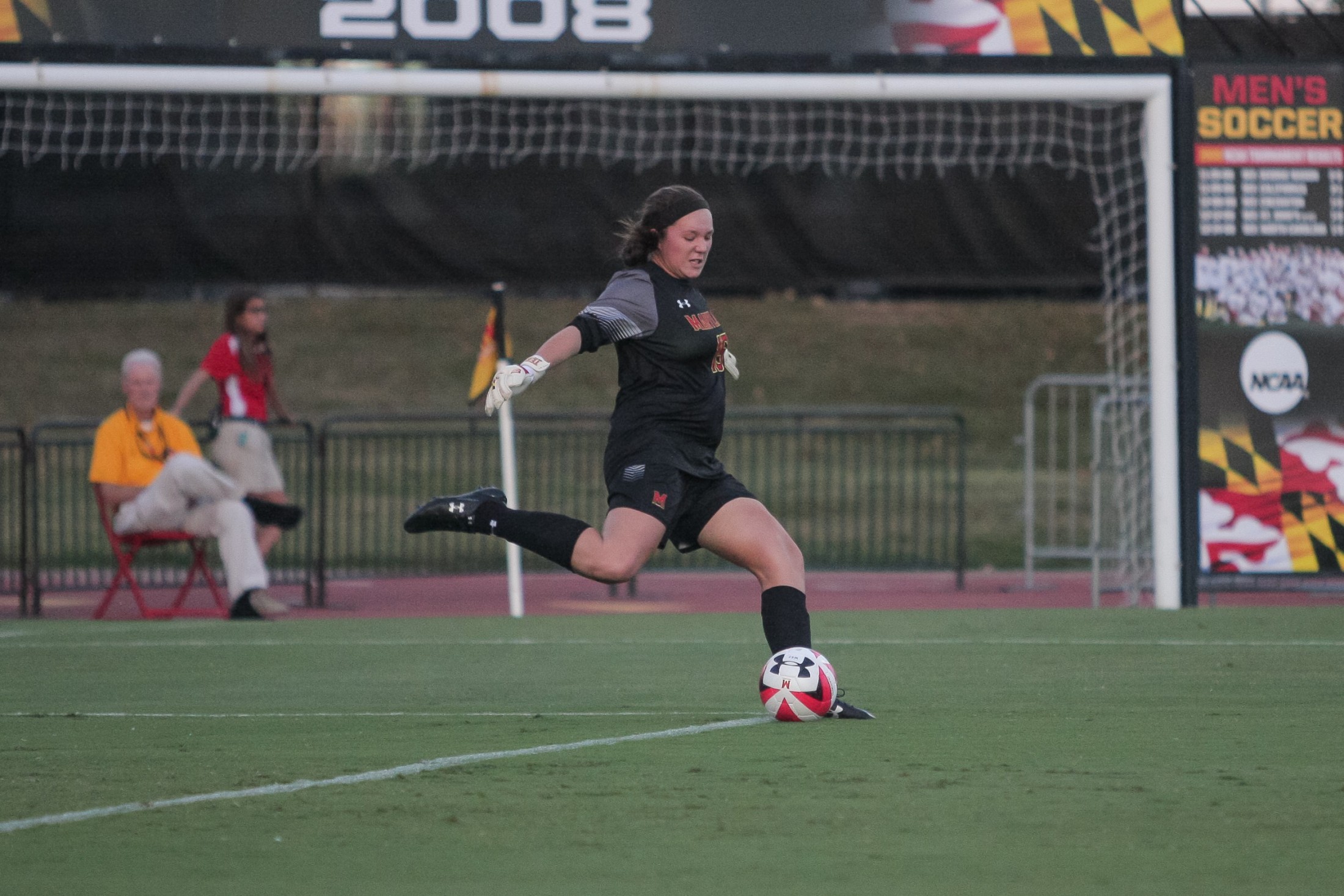 After watching film from the Maryland women’s soccer team’s 5-2 loss to George Mason, coach Ray Leone opted to make a decision based on his gut feeling.

Goalie Katelyn Jensen and the Terps backline allowed three goals against the Patriots, and after the intermission, Leone had Stephanie Senn play between the pipes. The decision wasn’t unusual for Leone, who has yet to name a starting goalkeeper and has divided the playing time among Jensen, Senn and Rachel Egyed.

But the same day Jensen and her teammates evaluated film, Leone told her she would be starting against No. 22 Rutgers on Friday night. In Maryland’s 1-0 loss to the Scarlet Knights, Jensen played all 90 minutes for the first time this season.

“Her kicking game is so good,” Leone said. “I think that really is the edge that she has that gets us out of trouble. We have opportunities to get further up the field just with her kicking game.” As the Terps analyzed film ahead of Friday’s matchup, Jensen evaluated Rutgers’ forwards, taking “detailed notes” related to each player’s tendencies. Freshman midfielder Nicole Whitley stood out.

Whitley is tied for the second-most goals on the Scarlet Knights’ roster, but her score against the Terps came on an unconventional play.

Her free kick rolled into the lower-right corner of the net after neither Jensen nor Maryland’s defense pursued it when the ball hit the ground.

But since the Terps knew Jensen would be in goal to open the second half, Jensen said the communication improved as the game progressed.

“One of the key problems is that all three of us goalkeepers have been playing, and we’re very different players,” Jensen said. “The field players didn’t know what to expect [and] whether or not I would [stay in goal] or come out.”

While Jensen’s success with goal kicks earned her the full start against Rutgers, Leone isn’t prepared to name her the permanent starter. Even after Jensen, who started 19 of 20 games at Kentucky last season, saved eight of the Scarlet Knights’ 21 shots, Leone continues to make clear every player on the roster has to earn starting time each week.

Though Leone won’t commit to Jensen, he said a starter might be named after two or three more Big Ten games. That doesn’t eliminate Egyed, a preseason Big Ten Player to Watch, and Senn, who has played 190 minutes this season.

As Maryland prepares for the remainder of its conference schedule, the team has worked to improved its communication. Knowing one goalie will play the whole game could ease that process.

“Playing the full 90, I had an opportunity to know my teammates better after the first half,” Jensen said. “Those mishaps didn’t occur because we talked about it at halftime. It’s hard because a lot of the team is new. It will be really helpful to play the full 90.”