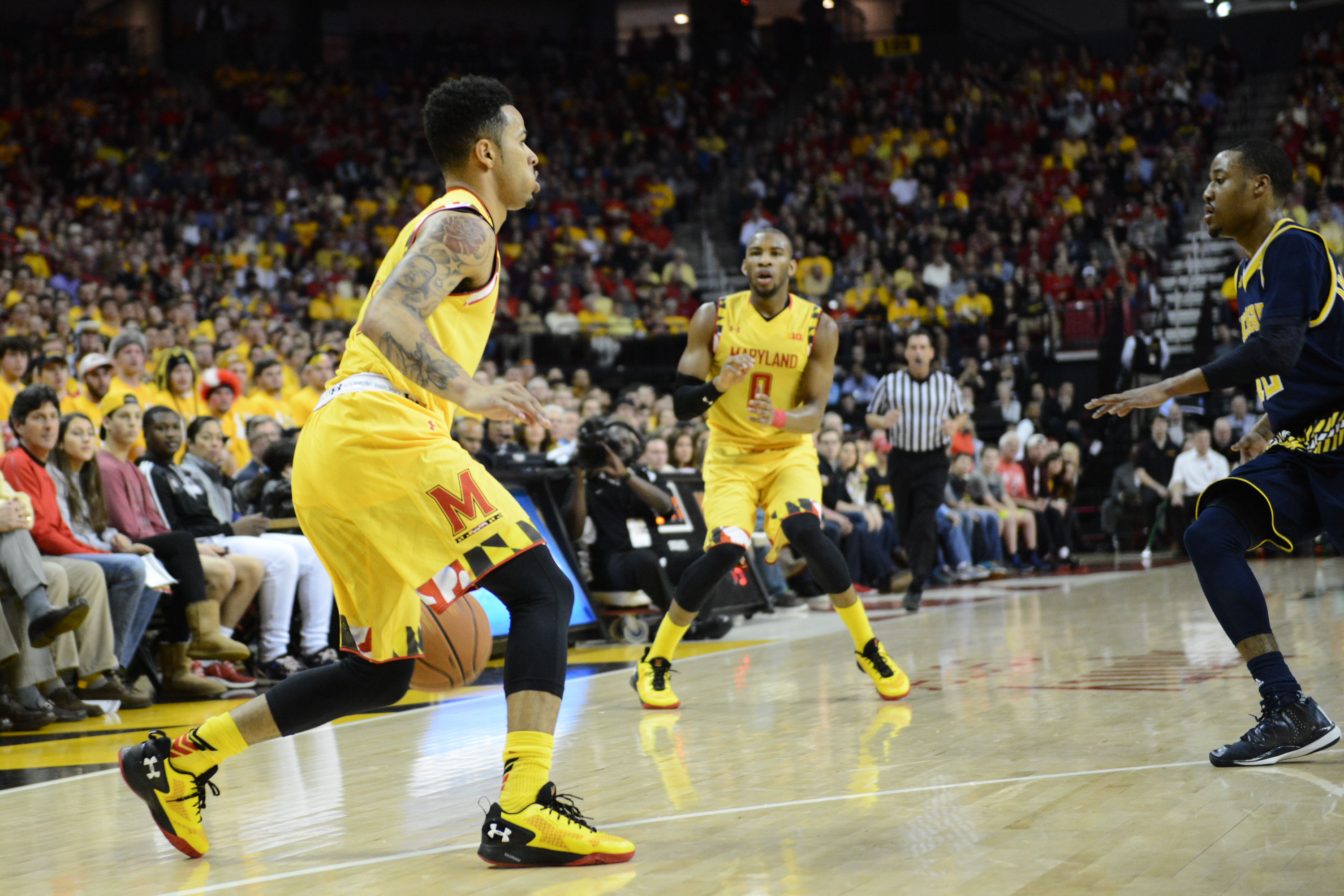 Guard Jaylen Brantley looks to dish the ball when the Terps played Michigan at Xfinity Center on Feb. 21, 2016.

Jaylen Brantley had lost his spot in the Terrapins men’s basketball team’s rotation. In a stretch of nine conference games, the reserve guard played two minutes or less in eight of them.

But Brantley’s teammates maintained the junior college transfer had the talent. So when he contributed five points and three steals in a much-needed 86-82 win over Michigan on Sunday, forward Robert Carter Jr. had an I-told-you-so moment with the media.

Many expected Brantley to play an important role backing up star guard Melo Trimble, especially after guard Dion Wiley suffered a torn meniscus in early November. But it took the sophomore eight games to make his first field goal.

And when it seemed he had gained coach Mark Turgeon’s trust toward the end of nonconference play, Brantley saw his playing time sapped at the beginning of January. Beginning Jan. 9 at Wisconsin, the Springfield, Massachusetts, native didn’t see the floor in four of seven games. 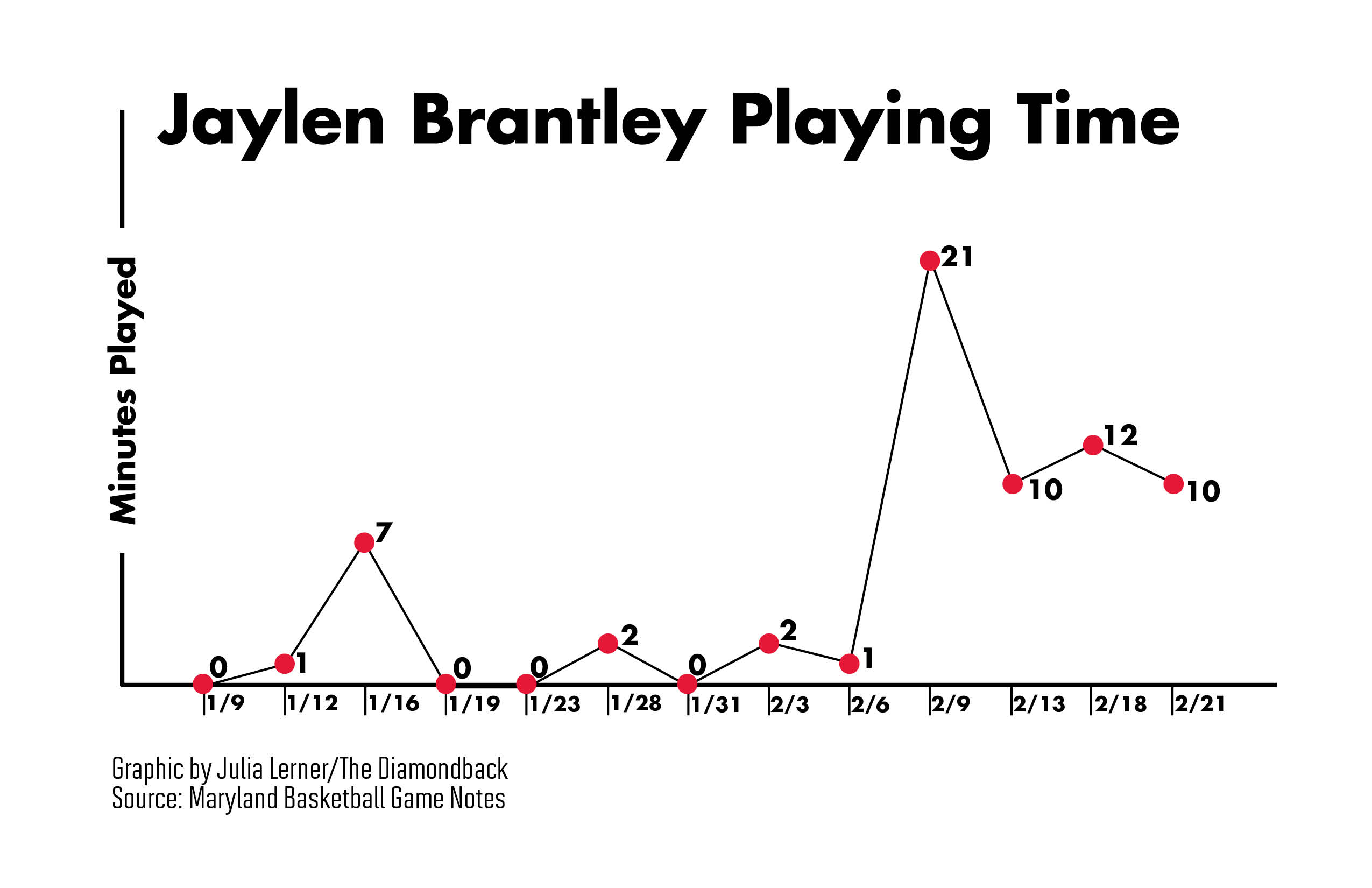 “He just had to learn,” Carter said. “He had to learn how to play harder all the time on the defensive end. And then if he did that, his offensive game will take care of itself. We already knew he could score the basketball, he can make plays.”

After playing a career-high 21 minutes against Bowie State on Feb. 9 — his first time playing more than seven minutes in more than a month — Brantley conceded he realized he needed to practice harder.

Brantley has seen his hard work translate into at least 10 minutes of playing time in each of the past four games.

“I’m so happy for that kid because Jaylen never hung his head, kept practicing hard,” Turgeon said Sunday. “When I decided to go with Varun [Ram] over him is when he kind of turned it on, and he’s been practicing well.”

The fifth-year coach met with each player individually after Thursday’s loss to Minnesota, the team’s second straight defeat. His message to Brantley was simple.

“I said, ‘I don’t want you taking bad shots, but when you are open, you shoot it. OK?'” Turgeon said. “‘Because you are a great shooter and we recruited you as a shooter.'”

When Brantley caught a pass from Carter midway through the first half Sunday, he didn’t hesitate to elevate from beyond the arc. The ball swished through the net for his first career 3-pointer in a Big Ten game.

“He can make shots; he can make plays,” Carter said. “That’s what he do. He wouldn’t be here if he wasn’t able to make plays and different things like that.”

While Brantley’s confidence on offense has been lacking at times, Turgeon has been critical of his defense. And with Ram specializing on that end of the floor, the defensive-minded coach turned to the former walk-on as the primary backup.

But Brantley has committed himself to improving his defense, and he showed that awareness Sunday. After notching four steals through the first 27 games, Brantley nearly doubled that mark Sunday.

Just 14 seconds after drilling the 3-pointer, Brantley stole the ball and sprinted to the other end of the floor for a layup to cap a 14-0 Terps run.

Brantley sealed the victory with a defensive play, too. The 5-foot-11 guard jumped in front of Michigan’s inbounds pass in the final seconds for his third steal of the afternoon.

It hasn’t been an easy transition for Brantley, who started 21 games at Odessa last season. And it was less than a month ago that he was spending all 40 minutes on the bench.

But Turgeon and Brantley’s teammates realize his importance down the stretch, so Sunday’s performance was a welcome sight.

“Jaylen is a winner,” Turgeon said. “If you’ve watched his career and what he’s done, he can really help us moving forward.”