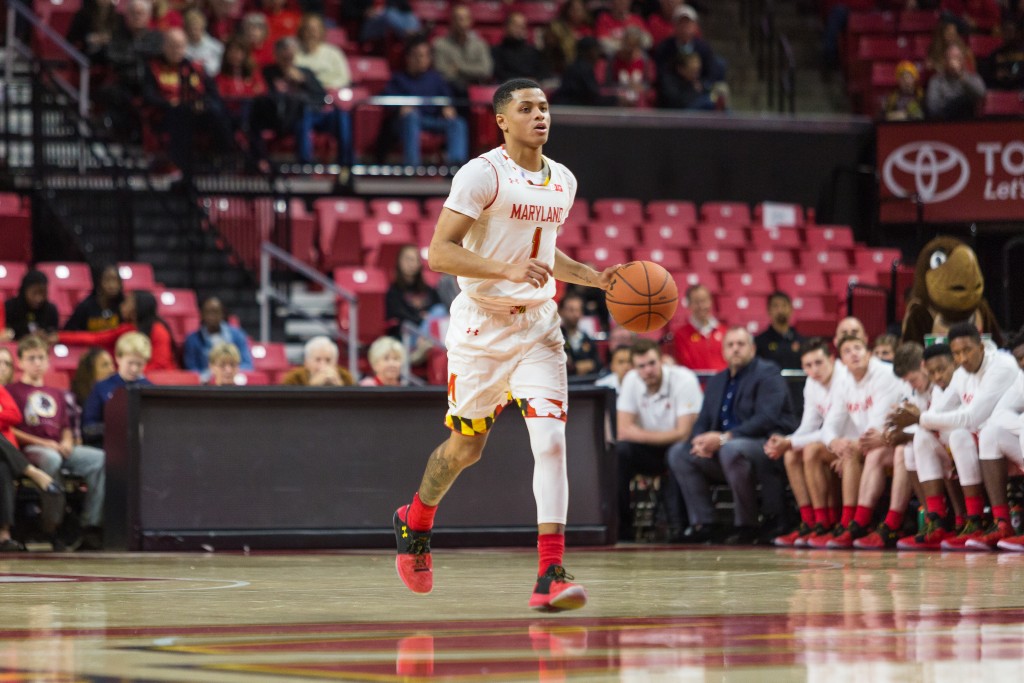 When the Maryland men’s basketball team returned to the Xfinity Center court to finish warming up minutes before playing Catholic, the squad pranked guard Anthony Cowan.

As the P.A. announcer boomed, “Here come your Maryland Terrapins,” only Cowan charged out of the tunnel. His teammates stayed behind, forcing Cowan to shoot layups by himself before his laughing teammates eventually joined him, feeling loose before playing their weakest opponent of the season.

Maryland’s faces were considerably less jovial when re-entering the tunnel at halftime, having trailed the Division III Cardinals for nearly half of the first period and holding just a six-point advantage at intermission.

“A lot of people don’t understand how hard it is to play these games,” Cowan said. “But that’s not an excuse.”

It took the Terps nearly 23 minutes to open a 10-point lead over Catholic, which finished in fourth place in the Landmark Conference last year and entered Tuesday with a 2-4 record in six games against fellow third-division opponents.

Jackson wasn’t in the starting lineup two games ago due to illness and didn’t recover in time to play in the team’s win over Gardner-Webb on Saturday. He was unavailable again Tuesday, this time due to shoulder soreness, but coach Mark Turgeon said the injury is “not serious.”

Fernando sprained his ankle against Ohio last Thursday, and after that game Turgeon predicted the freshman would miss the team’s next two games. He was right.

Turgeon said both Jackson and Fernando could have played Tuesday, had the team needed them. Instead, the duo has nine more days before the team’s next game and three weeks before Maryland returns to conference play.

Despite Catholic not boasting a player taller than 6-foot-8, Maryland struggled on the glass against the Cardinals. The Terps surrendered six offensive boards during the competitive first half and entered halftime having barely outrebounded Catholic, 18-15.

“I can’t explain it. I just think they were much more prepared and excited to play the game than our guys were,” Turgeon said. “Guys gotta be ready to play. They weren’t ready to play.”

While the Terps pulled away after halftime, they still struggled at keeping the Cardinals off the glass. Catholic pulled in eight offensive rebounds in the second half to raise its tally to 14 despite losing the overall rebounding battle, 40-33.

Meanwhile, Maryland continued to turn the ball over at a high rate against the Cardinals’ zone defense, finishing with 15 giveaways. The Terps entered Tuesday averaging 16.7 giveaways per game, the 333rd-worst mark in the nation.

“At this point, we just have to try to key in more and take care of the ball,” Cowan said, echoing a sentiment the team has expressed all year.

When Maryland started slowly against Gardner-Webb, Turgeon inserted Tomaic for the most important minutes of his career. The Canary Islands native took advantage of the opportunity, setting career highs with nine points and six rebounds.

When forward Ivan Bender struggled early Tuesday, Turgeon again turned to Tomaic, and the redshirt freshman again proved he can be a useful piece for Maryland.

Tomaic scored five consecutive points shortly after entering, continuing to show his range by draining his third 3-pointer this season. He finished with seven points and eight rebounds in 17 minutes.