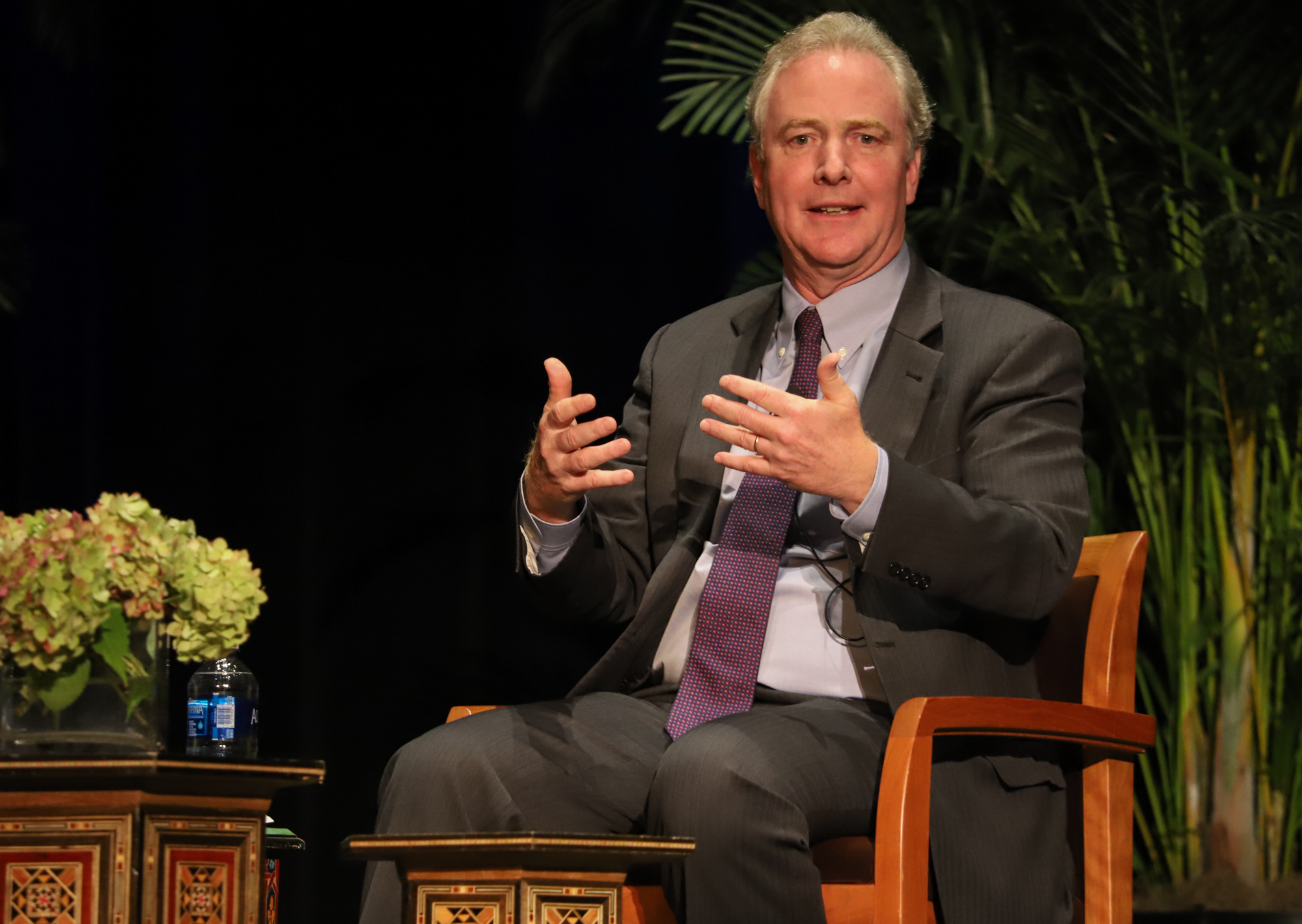 Sen. Chris Van Hollen spoke on Thursday about the deepening divide in American politics as well as events reflecting racial division at the University of Maryland.

The event — titled “The American Partisan Divide: From the Travel Ban to Charlottesville” — was for the Anwar Sadat Forum in Stamp Student Union’s Hoff Theater.

The murder of Richard Collins — a black Bowie State student — near this university’s Montgomery Hall bus stop in May shook the campus community, said Shibley Telhami, the Anwar Sadat Professor for Peace and Development and the moderator of the forum.

Sean Urbanski, a white former student at this university, was charged with murder. Whether the killing was a hate crime is under investigation.

“We are a diverse campus, and we had one person in our midst … he is suspected of having carried out a hate crime on our own campus last spring,” Telhami said.

Earlier this month, police responded to a swastika found in the plant sciences building. In April, a noose was found in the kitchen of the Phi Kappa Tau chapter house.

Van Hollen, who attended Collins’ funeral, said part of the problem is that President Trump has further divided America along racial lines instead of alleviating tension.

“We have a lot of work to do as a country, and it’s harder when you have a president trying to exploit these differences for political gain,” Van Hollen said.

Trump’s presidency has had a lasting effect on partisanship boundaries, Van Hollen added.

Republicans’ positions on Trump’s travel ban also shows this political divide, Van Hollen said, adding that although some are discontent with the policy, many Republicans are afraid to push back against Trump too hard.

“At least quietly, they’re not wild about what he’s doing, but they don’t want to get clobbered by the pro-Trump faction around the country,” Van Hollen said.

Van Hollen said these travel restrictions don’t aid national security, adding that “the reality is we have the strongest vetting restrictions of any country, already in place under Obama.”

Van Hollen said he wasn’t sure if the updated ban would survive legal scrutiny, but other options remained, such as defunding the executive order through the legislative process.

The gridlock and division on Capitol Hill today, as well as around the country, is uniquely different from the past, Van Hollen said. While most presidential campaigns are divisive, Trump continued his divisiveness after the election, he added.

Telhami agreed that the division present in America is unprecedented.

“We are a divided country, not just across party lines, but it goes deeper than that,” Telhami said. “I’ve never seen the kind of divide we see today on nearly every issue.”