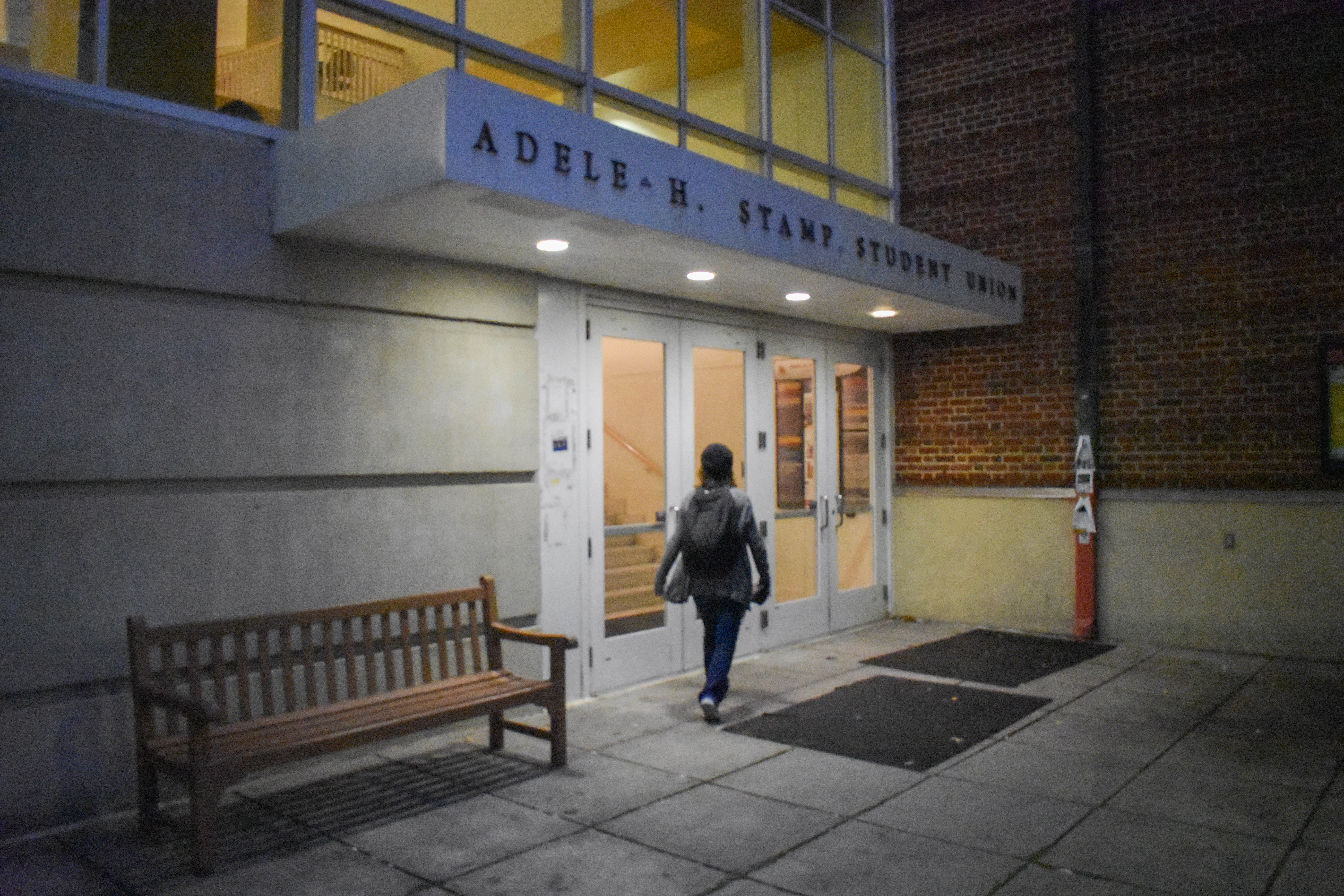 The north entrance of the Stamp Student Union, on November 6, 2017.

A proposed project to renovate Stamp Student Union’s north entrance for the first time in more than 20 years could add new features to the building and boost accessibility.

“It’ll be easier to realize where the north entrance of the building is, because it’s tucked back in a corner right now,” Olen said.

The project — which is pending approval from the University System of Maryland — will improve Americans with Disabilities Act accessibility by adding a glass entryway that connects to an elevator, so people with disabilities can use the building’s main door, Olen said. A side door that serves as an ADA entry point will become exit-only, Olen added.

“The university tries to have all entrances be fully accessible for all students,” Stamp Associate Director Stephen Gnadt said. “I don’t think you want to say to a student in a wheelchair, ‘You have to come in a different way.’ It’s the main north entrance to the building, and I think the main north entrance to the building should be fully accessible to all students.”

University-employed designers met with the Stamp Advisory Board in March to begin planning the project, but renovations have been needed for some time, Stamp Director Marsha Guenzler-Stevens said.

“We have crumbling infrastructure,” Guenzler-Stevens said. “There’s a [roof] overhead out there that needs to be replaced because it is crumbling. There is also pitted pavement that is on the edge of becoming a trip-and-fall hazard.”

The project could cost about $1.5 million, and construction was projected to begin in May 2018, but it will likely be pushed back because of design modifications, Guenzler-Stevens said. Stamp’s Advisory Board, which consists of students, staff and alumni, is discussing ways to stage construction without disrupting students, she said.

The announcement of two new north campus dorms by 2020, which will increase student traffic, and the desire for improved ADA access in the building heightened the need to renovate the entrance, Guenzler-Stevens said.

The Architectural Landscape Review Board, one of this university’s construction project approval authorities groups, first reviewed the project’s design in July, Olen said. The proposed exterior renovations were evaluated on their ability to reduce safety hazards and help guests locate the entrance, Olen added.

The board requested that a single ADA accessibility entry point be added to the project’s next and accepted a modified design in September, Olen said.

Leah Surikov, a sophomore cellular biology and genetics major, said she thinks the proposed renovation will benefit North Campus residents more than South Campus residents, and would rather see a renovation added to the Student Organization Resource Center study area, which underwent a $3 million renovation in fall 2016.

“A lot of people come here to study, and sometimes it’s hard to find space in that room, so if it was expanded, that would be much more helpful,” Surikov said.