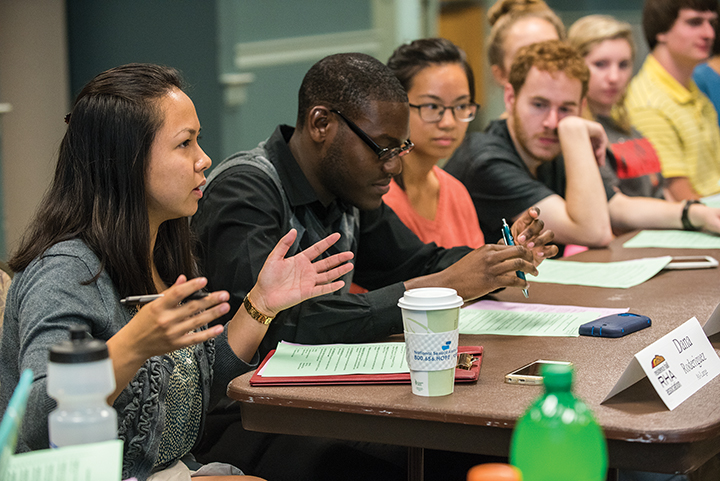 As the 2016-17 year starts, the Department of Residence Life and the Residence Hall Association are working to create an open dialogue between students and University of Maryland Police after officers used pepper spray at a Courtyards party made up of predominantly black students in May.

One of the RHA Senate committees, the Resident Life Advisory Team, will be focusing on establishing an open communication process on how students and police can address situations involving similar use of force in the future. The committee will speak to constituents once the RHA begins meeting in late September about what they think the student and police relationship should look like.

Specifically, ReLATe will work toward getting answers for when students should call the police in scenarios involving drugs, the appropriate police response to such scenarios, and consequences for student intervention where police force is used. These questions are part of the plan to increase constructive communication that the RHA hopes to implement once the RHA Senate reconvenes at the end of the month.

“The initiative is in the beginning stages, and looks like it will continue throughout the year,” said Michael Glowacki, assistant to Resident Life’s director. “These questions are really important issues to delve into.”

The RHA will be working closely with Resident Life director Deb Grandner to facilitate a conversation between students and the department in order to ensure students’ voices are heard.

“If there is something we find unjust and questionable, we should have a dialogue about it and talk it out with our constituents,” said Helen Liu, a junior marketing major and the RHA’s public relations and outreach officer.

The Student Government Association will be releasing a police interactions handbook via their social media accounts early next week as well, which will lay out the rights of students when dealing with police.

The goal of the handbook is to “ensure residents know their rights and have a healthy relationship with the police,” said A.J. Pruitt, SGA Student Affairs vice president and a junior economics and government and politics major. “We want to make this a safe and healthy process.”

The SGA is additionally in the process of filling its Police Advisory Review Council, which will meet with University Police throughout the year.

The NAACP, SGA and Phi Beta Sigma fraternity held a campus community town hall on Aug. 31 as well that allowed community members to voice any anger, distrust and concerns they had with police.

The next step in improving relations between students and the police is having students speak out to student leaders, whether that be the NAACP or SGA, to voice their thoughts and ideas, said Lauryn Froneberger, president of this university’s NAACP chapter.

Correction: Due to a reporting error, a previous version of this story incorrectly quoted Lauryn Froneberger as referencing the pepper spray incident rather than the community town hall. This story has been updated.