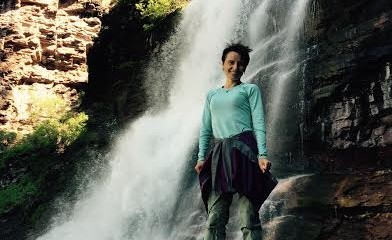 The National Science Foundation awarded Maria Cameron, a University of Maryland mathematics professor, the Faculty Early Career Development Award this month for her work on computer algorithms and complex systems.

The award recognizes outstanding research, education and the integration of the two, according to the foundation’s website, and includes $400,000 in funding. Cameron said she plans to use the money to develop her ongoing research in methods of analyzing complex networks, the proposal for which she earned the NSF’s recognition.

“It’s a very prestigious award, and I’m very happy and excited,” she said. “It means that the proposal was appreciated by other researchers who evaluated it. And it shows me that whatever I think makes sense to investigate, other people agree.”

Cameron’s proposal focuses on the development of computer algorithms to analyze large stochastic networks. Stochastic processes, in probability theory, are collections of random variables representing the evolution of a system over time. The study of complex systems aims to investigate the behaviors of a given system and the relationships among its parts.

A “small but strong group” in the mathematics department is working on the mathematical theory concerning stochastic processes, professor Mark Freidlin said.

“It was clear from the very beginning that the theory may have important applications in physics, biology, economics and other areas,” Freidlin said. “But, as almost always, the road from mathematical theory to applications is not simple.”

In developing applications for the theory, those involved must learn new mathematics, advertise the new theories among applied scientists and develop computational methods to use the theory in concrete problems, he said. Cameron is looking into applications and computational aspects of the theory.

Applications for Cameron’s work cover circumstances in which there is uncertainty about a system’s interaction with its surroundings, said mathematics department chair Scott Wolpert. These can include modeling financial markets, weather systems, neuron communication and traffic flow on networks — a part of mathematics he said affects many modern questions.

“We are very proud of Maria’s very special accomplishments, and we are very fortunate she is a member of our department,” Wolpert said. “Her research involves the applications of modern mathematics.”

Complex networks are used to model processes in the natural and social science subjects, including physics, economics and biology, Cameron said. Her goal is to develop computational tools that give researchers the ability to actually evaluate questions involving complex networks that have been investigated only theoretically in the past.

Recognitions like Cameron’s tend to lead to increased interaction at the university, drawing new researchers, fellows and students to the campus, Wolpert said.

Cameron graduated from the University of California, Berkeley, in 2007 with a doctorate in applied mathematics. She was also an instructor at the Courant Institute of Mathematical Sciences at New York University until 2010, when she joined the mathematics department at this university. She currently teaches courses for scientists and engineers at the undergraduate and graduate levels.

In addition to her most recent award, Cameron also received the Young Faculty Award from the Defense Advanced Research Projects Agency in 2012 and was an Alfred P. Sloan Research Fellow from 2011 to 2013.