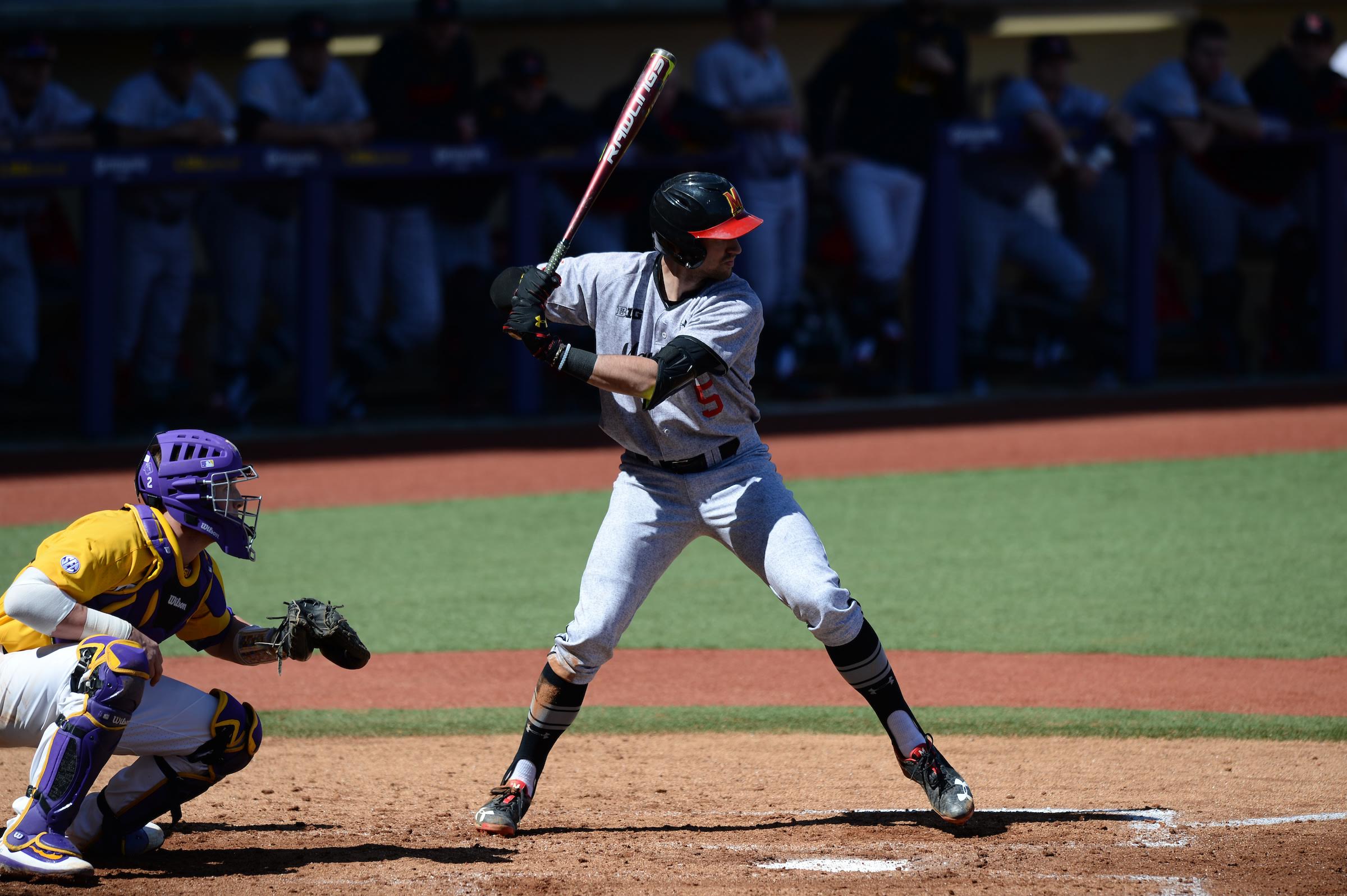 First baseman Brandon Gum looked down at home plate, shook his head and cringed in frustration after Rutgers right-hander Joe Neglia struck him out in the fifth inning of the Maryland baseball team’s 9-1 win Sunday afternoon.

The Terps had taken a nine-run lead, but Gum stranded right fielder Marty Costes on third base with two outs when he swung and missed on a 1-2 pitch. It was an uncharacteristic sequence for Gum, a George Mason transfer who has struck out 21 times entering Maryland’s midweek contest against Richmond on Tuesday.

In Gum’s first series since returning from a hamstring injury he suffered March 19 against Princeton, his four hits helped the Terps sweep the Scarlet Knights in their first trip to Piscataway, New Jersey, since 1951.

“That’s obviously not the series I wanted to miss by any means,” Gum said, referring to Maryland’s first Big Ten series against Michigan the weekend of March 24, which he missed due to his injury. “I felt like I was a little quick on some at-bats, pulling balls. Just have to settle back down.”

Though Gum was sidelined for 12 days, Szefc said, he participated in an intrasquad scrimmage Wednesday. But his contributions while injured also contributed to Maryland’s success against Rutgers.

Gum recorded shortstop Kevin Smith’s swing and recommended adjustments leading up to Maryland’s midweek games against UNC Wilmington, and third baseman AJ Lee approached Gum about watching his feet during practice at-bats. The advice proved to be beneficial, as Smith went 1-for-2 with an RBI before departing Saturday’s game with an injury. Lee also had success, posting three hits and a pair of RBIs on the weekend.

“He’s just a veteran guy who’s very smart when it comes to his approach,” left fielder Madison Nickens said. “I take advice from him. He’s trained with some good guys. He has a lot of knowledge.”

Gum recorded an RBI in two of three contests last weekend, but most notably contributed to Maryland’s offensive outburst Sunday. In the second game of the doubleheader, he went 2-for-4 with three RBIs, including a solo home run in the third that gave Maryland a 4-0 lead.

With Gum back in the cleanup spot, coach John Szefc used a familiar lineup against the Scarlet Knights. While Gum was rehabbing, Smith, Nickens and designated hitter Will Watson moved up a spot in the order.

Despite his weekend production, Gum said he wasn’t handling offspeed pitches the way he typically does, likely a symptom of his time sidelined. But with Gum, who boasts the team’s second-best batting average (.305), back in the lineup, Maryland’s offense is even more dangerous.

“He’s an older veteran guy who knows the strike zone,” Szefc said. “One thing that goes unsaid with him is it’s hard to step into a program as a new guy and hit the ground running the way he has, regardless of his age and experience. He’s really been a big plus for us.”