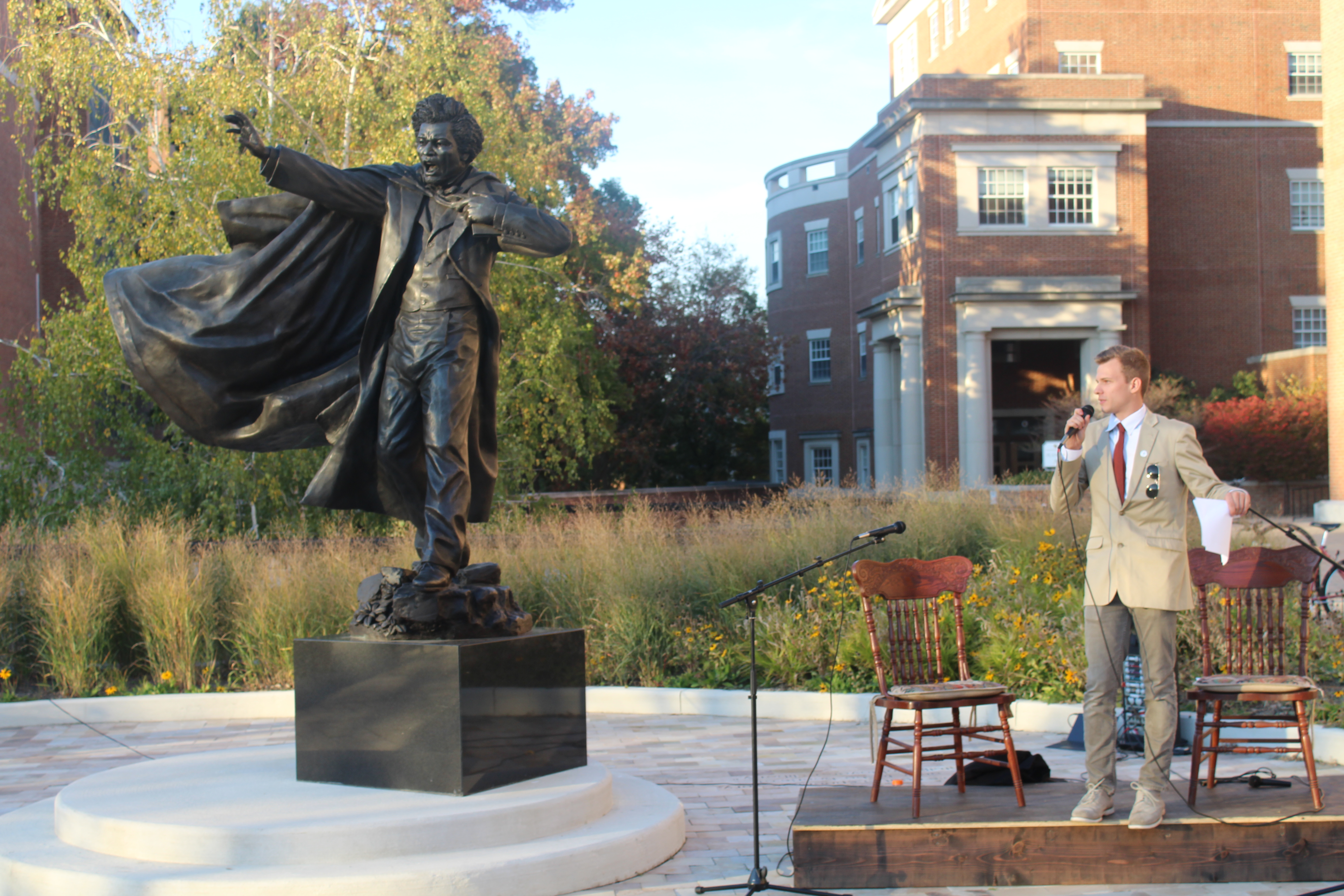 A CEO of a brewing company, a woman who sued her Texas college and a few dozen University of Maryland students gathered on the campus Saturday because they all had one thing in common: an interest in defending and celebrating freedom of speech.

College Park Students for Liberty hosted a Free Speech Rally at Hornbake Plaza and Stamp Student Union, and the rally was co-sponsored by several organizations including the business school, the Flying Dog Brewery and the Foundation for Individual Rights in Education. Young Americans for Liberty and the Leadership Institute also co-sponsored the event.

Ethan Pritchard, chapter president of Students for Liberty, kicked off the evening with an address about his organization’s goals, including an initiative to increase diversity of ideas among newly hired faculty.

“The main issue is that [universities] are sending a message that it’s okay to shelter yourself and to just go without hearing other people’s opinions and that you’ll be fine your entire life, and that’s not how it is,” said Pritchard, a senior management major.

“I feel for the people that may have been ridiculed their entire lives and need a solace to go to, to get away from ridicule, and I understand why that’s necessary,” he said.

Terps for Trump President Matt Morris also spoke at the event and gave a brief explanation for the cancellation of its event featuring Breitbart editor and journalist Milo Yiannopoulos. The group could not cover this university’s $6,500 security fee.

“You could say that any event has the potential to have a bomb threat at it, and you could really use that to silence any speaker, because that’s not an objective standard to hold someone to,” Morris said.

Nicole Sanders, who sued Blinn College in Texas while she was a student there because the school made her seek special permission to display gun rights signs, also spoke at the event, noting the impact the issue had on her.

“When this process started, I was this shy, timid, meek little girl who was always afraid to say something; I always just agreed with everybody,” Sanders said. “And now I’m the complete opposite. I have no problem going on a campus and talking to students.”

FIRE rates this university as a “green light” school, or one with policies that “do not seriously imperil speech,” according to its website.

After a planned move into the Charles Carroll Room in Stamp after it got dark outside, Catherine Sevcenko, FIRE’s director of litigation, discussed student protest and campus freedom of speech issues, including hate speech.

“I don’t want to underestimate the pain that hate speech can cause,” Sevcenko said. “It is real. It is something that we as a society need to work on eradicating. [But] hate speech, as abhorrent as it is, it also tells us who the assholes are.”

Sevcenko also argued against college-wide policies about trigger warnings, saying a “one-size-fits-all” solution doesn’t work for an entire university. Instead, professors should make decisions for their respective classes, she added.

Jim Caruso, CEO of Flying Dog Brewery in Frederick, gave the keynote speech on his company’s experience fighting censorship against what some liquor commissions ruled was obscenity on his beer labels. Caruso took the dispute to court, and the decision was ultimately reversed.

Earlier this year, through the brewery, Caruso founded the 1st Amendment Society, which advocates for freedom of speech.

“It all ties into a core belief that freedom of speech and creative expression are not some means to an end to accomplish something,” he said. “The very concept of being interesting, of doing original work at the edge, of creating art, the very sense of humanity is that ability to express yourself, to share your ideas.”

Junior Ekan Gilpin, who declined to give her major, said she was impressed with “hearing all the different viewpoints in one event,” and with how the event was not one-sided.

“For this, people had very different opinions, but they were respectful of each other’s opinions,” she said.