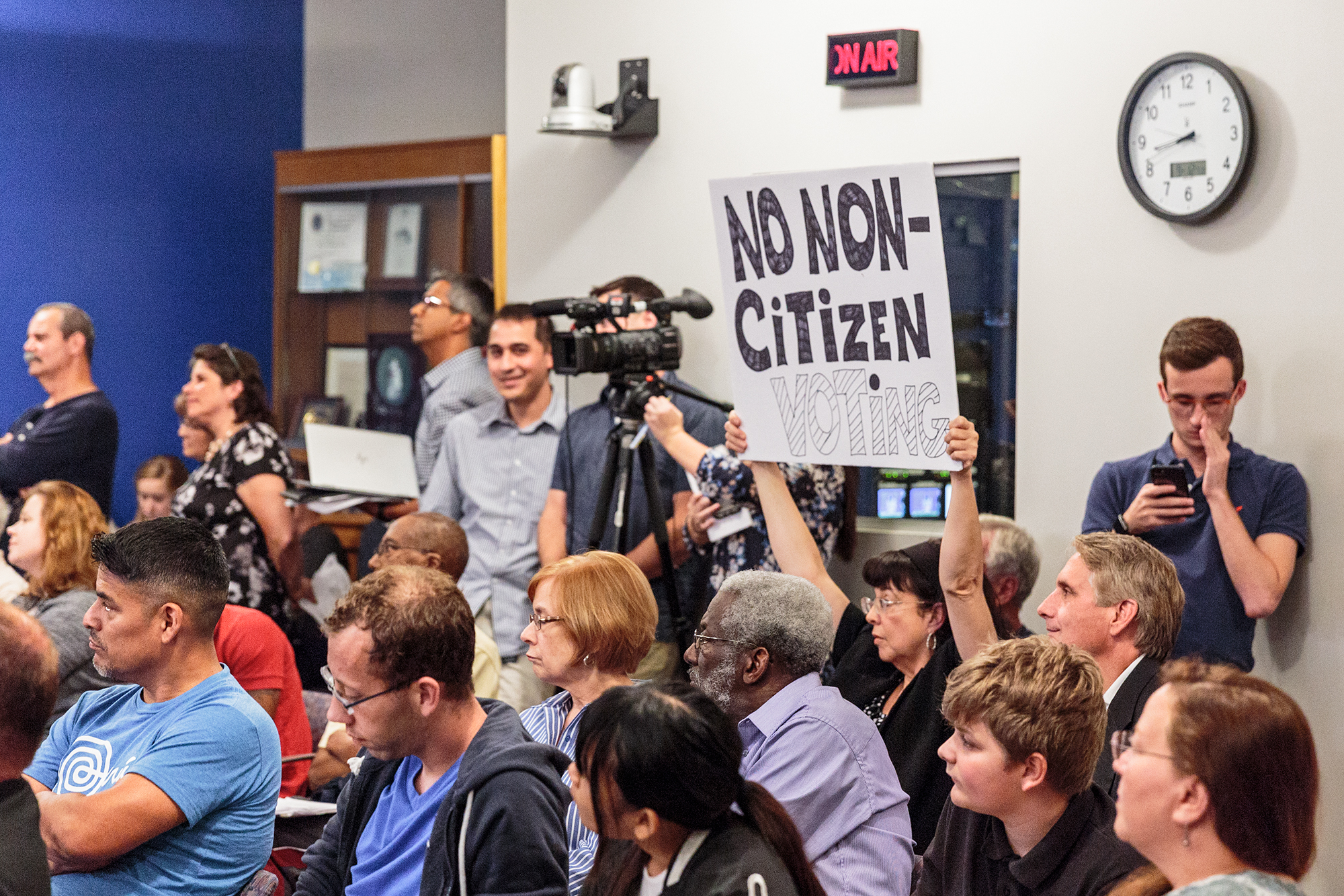 Emily Weant, a College Park resident, holds up a sign that expresses her opposition to a charter amendment about non-US citizen voting rights at the Tuesday September 12, 2017 City Council Meeting. Weant and others opposed to the amendment are concerned about the effects of allowing city residents who are not US citizens to vote in local elections. (Tom Hausman/The Diamondback)

Days after the College Park City Council announced non-U.S. citizens could vote in municipal elections, officials announced the proposed charter amendment didn’t get the six votes it needed to be adopted. But the six-vote requirement to pass future charter changes does not comply with state law, although the non-U.S. citizens voting proposal still didn’t get enough votes to pass, according to a city news release sent Wednesday afternoon.

On Sept. 12, the city council voted 4-3, with one abstention, to adopt the proposed charter amendment allowing non-U.S. citizens to vote in College Park. But three days later, officials announced that the body — which usually requires a simple majority among its voting members to adopt council actions — needed a minimum of six affirmative votes to pass future charter changes, a policy that had been in effect since June.

Since mid-September, the mayor and council have worked with attorney Victoria Shearer to conduct an independent legal review of an April charter amendment, which included this six-vote policy, Mayor Patrick Wojahn said. The council unanimously approved the charter amendment April 25, and it went into effect 50 days later.

The legal review process began after “news got out about the supermajority requirement” as it pertained to the non-U.S. citizens voting initiative, Wojahn said.

“Typically, we’ll pass a charter amendment, and we should conduct a legal review at that time,” Wojahn said. “However, in this case, we didn’t become aware of the fact that there were legal concerns with the supermajority requirement. That’s why … once we heard about the potential problems, we decided to conduct a more thorough legal review of the charter amendment that was passed earlier in the year and make sure that everything is legally valid.

“We were not aware at the time [that it was passed] that it would violate state law,” he added.

This determination does not impact the outcome of the non-U.S. citizen voting measure, which did not pass because it did not receive five affirmative votes.

The council is working with independent legal counsel to review recent changes to the city’s charter to ensure it complies with state law, the release read.

“We’re going to take a look at the charter amendments that were passed earlier this year to make sure that they’re fully in compliance with state law and then making whatever changes are necessary to make sure that they are in compliance,” Wojahn said, adding that it would likely be early next year that they “would work with our attorney and Ms. Shearer to come up with whatever changes are necessary.”