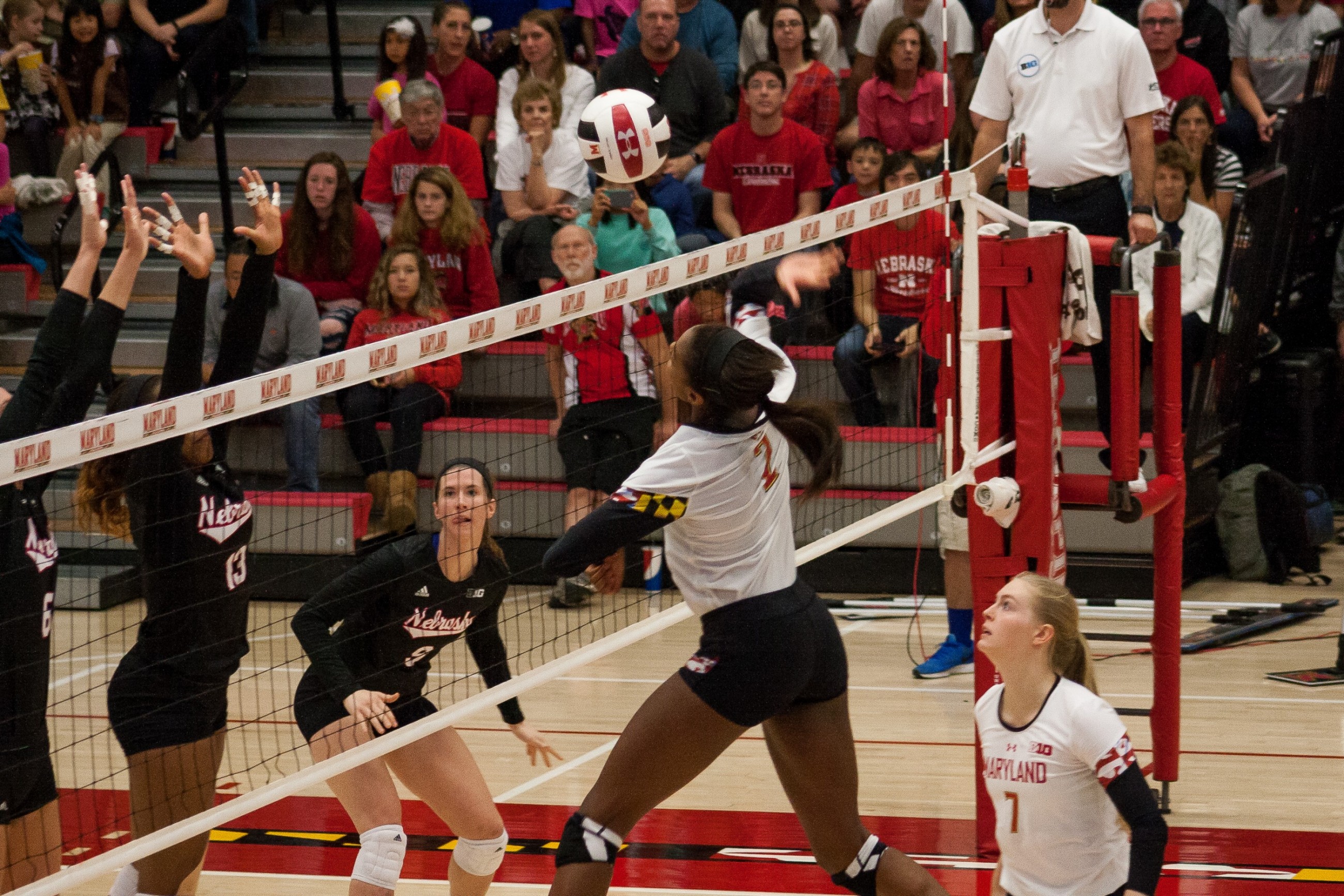 Even though Maryland volleyball middle blocker Hailey Murray failed to notch more than six kills in her first seven Big Ten matchups, her teammates believed she was an important part of the squad’s attack.

After all, the junior ranked second in kills among returning players entering this season.

So against No. 2 Nebraska on Sunday, coach Steve Aird asked the Terps to integrate Murray more often. She responded with nine kills to two attacking errors in the straight set loss.

“She’s definitely a weapon that we need to use more often,” opposite hitter Angel Gaskin said. “When she’s on, it really spreads our offense, and it opens up the game.”

The Terps have leaned on Murray for 11.6 percent of their attacks this season. Against Nebraska, though, she played a larger offensive role and accounted for 14 percent.

On multiple occasions in the matchup with the Cornhuskers, she slid to her right and spiked the ball on the run to earn a kill. Each time, her teammates pumped their fists and nodded their heads as they entered the huddle.

Murray said such plays wouldn’t happen if other players weren’t performing at a high level.

“It really helps to know that the rest of my team is playing pretty well,” Murray said. “The passes were there and [setter Taylor Smith] was great, so they really set me up for success.”

The middle blocker lauded Smith, a first-year starter, for becoming more comfortable with passing as the season has progressed.

“She’s gotten more confident, she knows what she is doing and I see her get better every single day,” Murray said. “She’s been really confident in her decisions, and that just helps the entire team.”

After the match, Aird said he wanted to give Murray more hitting opportunities to take pressure off outside hitter Gia Milana, who is the most frequently used attacker in his three-year tenure in College Park.

Throughout the season, the coach has preached balance but admitted the difficulty in achieving even ball distribution without other quality outside hitting options. He hoped to use Murray — a blocker — to provide support.

Still, Milana recorded a team-high 37 attacks in the loss to the Cornhuskers, though three other players also contributed more than 10 attacks.

“We wanted balance,” Aird said. “I thought our balance was OK. I didn’t want to set Gia 50 times and no one else get the ball.”

Aird was “proud” of the way Murray capitalized on her opportunities and added “those [attacking] numbers are legit numbers against a really good volleyball team.” Even so, he wants her to play at that level more often.

While she hasn’t always made the offensive impact she did against Nebraska, Aird believes Murray can become a more reliable part of the squad’s attack entering the final month of its season.

“It’s in her,” Aird said. “But consistency … is the battle. We need to play toward the high end of our talent every match.”