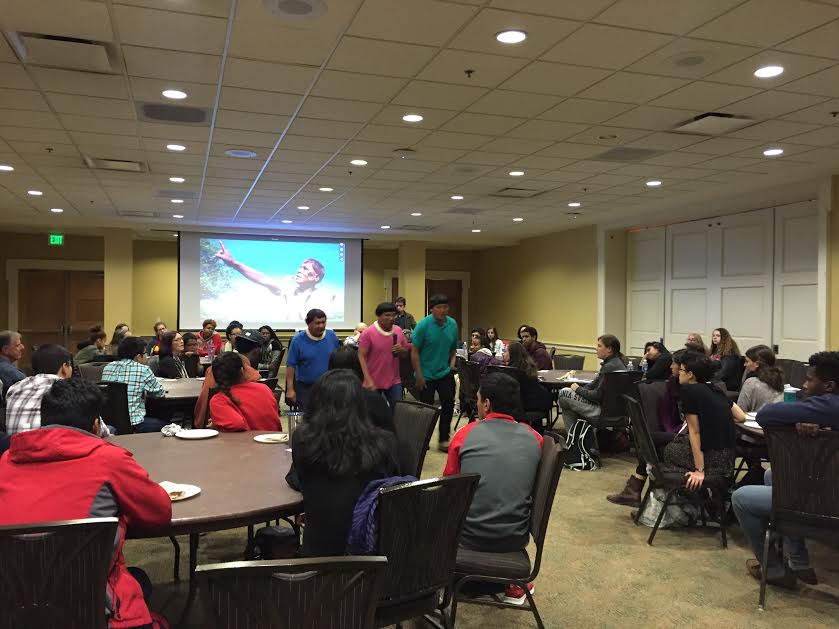 Three elders from the Amazon Wauja community were invited to the University of Maryland on Monday to share stories about their native culture and the struggles their people face.

The event, described as a celebration of Indigenous People’s Day, was held on what’s nationally recognized as Columbus Day, which celebrates Christopher Columbus’ voyage to the Americas. It’s a holiday that the American Indian Student Union hopes will soon change.

Renaming Columbus Day was one of the main priorities laid out at the event held in the Stamp Student Union’s Grand Ballroom Lounge. The group launched a petition to begin the process of asking this university to acknowledge Indigenous People’s Day instead of Columbus Day. They want the school to remove the current name from university materials.

“One cannot fully support indigenous students and communities at UMD when they are faced with an annual reminder of a “holiday” that represents the pain, genocide, and trauma of indigenous peoples,” the petition reads.

Calling the day “Indigenous People’s Day,” AISU members say, would end the celebration of a man who, after landing in America, catalyzed the suffering Native Americans felt during colonization.

The Wauja elders discussed how they were never found by Spaniards from Columbus’ time because they lived in the middle of the Amazon. However, they said this did not protect them from pestilence and disease that hurt their population dramatically.

Their original and official name, Wauja, has been lost and replaced with Waura.

Professor Phil Nash said it’s important to recognize the “genocide” of Native American people. Nash and his wife, Emi Ireland, are housing the three elders, and giving them an opportunity to visit native North American Indians.

While doing so, the elders are also working to get digital cultural artifacts embedded into museums. By viewing old footage and photos, the Wauja are able to identify relatives and explain their culture.

Even as they work to bring back some of the lost Wauja culture, increased deforestation is destroying land that the Wauja call home.

A video shown during the event discussed how 42 percent of Brazilian rainforest surrounding the Wauja has been lost to soy and corn farming, and another 10 percent to forest fires that could not be contained.

Tukupe Waura said he wants the world to know what is happening to his tribe. He is an activist for the native people, and attended a climate summit in Paris to speak on deforestation and indigenous rights issues.

The event ended on a less serious note, with two songs and dances performed by the elders and some volunteers.

At the end of the evening, AISU emphasized the importance of retaining the Native American culture.

“Don’t lose your culture. That is precious,” Karatu Waura said. “It is your culture, preserve it, cherish it, our ancestors gave us our cultures, so therefore you should not let it go.”