Instead of air conditioning, a robot could keep you cool 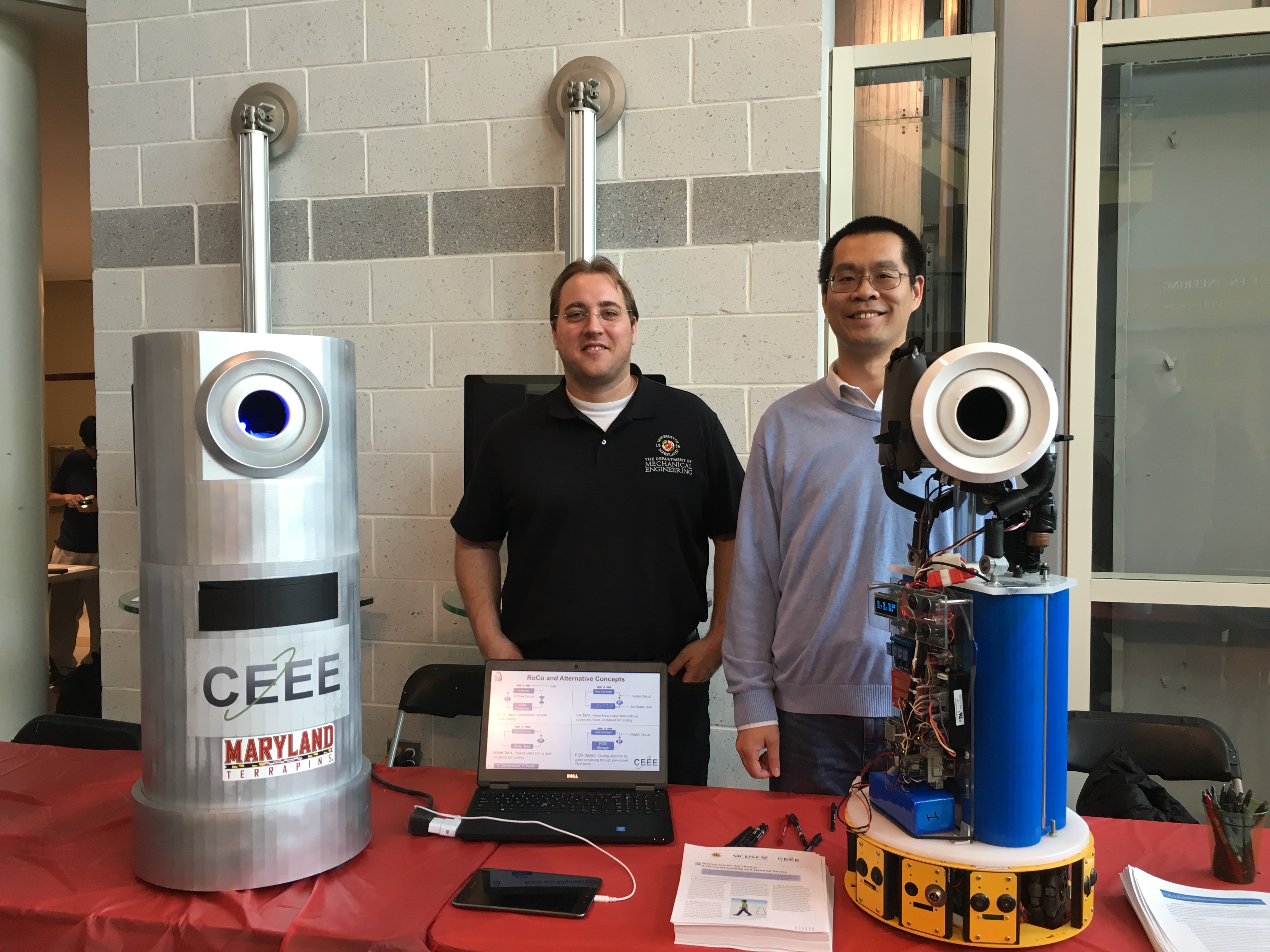 University of Maryland researchers are using a $2.6 million grant to begin the process of building a robot that would follow people around and keep them cool or warm.

The personal air-conditioning robot, known as Roving Comforter or RoCo, is still in the prototype stage, but it has the potential to conserve energy by storing the hot air within itself — unlike a traditional air conditioner —and “regenerat[ing] itself” at night, said Vikrant Aute, a university research scientist.

“Imagine a scenario where you have an entire house, and there is only one person in the house,” said Aute, who is also the Integrated Systems Optimization Consortium director. “Instead of running an air conditioner for the entire house, you could just turn the AC down a lot and use RoCo to keep you comfortable.”

All research and development is made possible through a three-year grant, awarded in April 2015 from Delivering Efficient Local Thermal Amenities, a subprogram within the Department of Energy. There are 11 projects in total that received funding.

“We fund programs that are very high-risk, high-reward, transformational programs to do things like save energy or generate new sources of renewable energy and things like that,” said Jennifer Gerbi, a program director of Advanced Research Projects Agency-Energy, which oversees DELTA.

Some of the other teams participating in this DELTA-funded project are trying to develop a smart fabric that can heat or cool you, Gerbi said.

There are four main groups, both university and private, involved in RoCo’s development. The researchers at this university, who make up one of the main groups, are led by Professor Reinhard Radermacher and are spread among two subgroups focusing on two aspects of the development.

The lead subgroup, headed by Aute, is developing the air conditioning and putting the final product together. The other subgroup, which professor of mechanical engineering and researcher Jelena Srebric leads, focuses on the thermal comfort aspect.

Dalgo, a mechanical engineering doctoral assistant on Srebric’s team, said the group is moving into the second stage of the project. The first stage involved online simulations.

“We want to develop a sensing unit that allows us to infer the thermal comfort of the user,” Dalgo said. “RoCo will be intelligent enough to determine if a person is hot or cold, comfortable or uncomfortable.”

Dalgo stressed the importance of teamwork throughout the process, noting that his collaborative work with Srebric, post-doctoral researcher Mohammad Heidarinejad and research assistant Nicholas Mattise has helped them progress in developing RoCo’s innovative sensing unit.

In addition to the university researchers and graduate students working on RoCo, researchers from Oak Ridge National Laboratory, Sandia National Laboratories and FirstBuild are also working on different parts of the project. Oak Ridge specializes in robotics, electronics and sensors; Sandia specializes in designing high-performance heat exchangers; and FirstBuild is a feedback partner because they have a showroom where new technology is displayed, Aute said.

The tricky part is what happens when RoCo is fully developed and put on the market, Du said.

“We’ve relied on space heating and cooling for so long,” said Du, who just completed her master’s in mechanical engineering. “There is still a long way to go for all of our potential customers to accept this concept and to really purchase RoCo.”

Ultimately, the researchers have an intention for it to become a marketable product after the three-year funding period, Aute said.

“The end goal … is essentially to have a product in the market, and we are working in that direction,” he said.