Maryland baseball’s Dan Maynard delivered vs. Richmond after not starting for two weeks 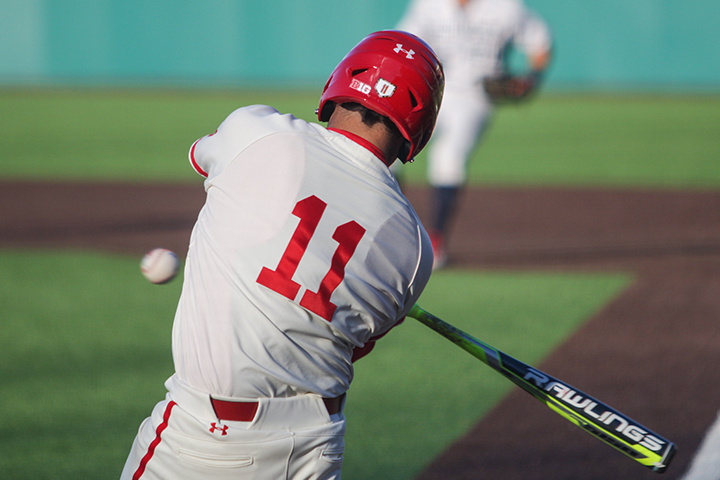 Maryland baseball designated hitter Dan Maynard rounded third base, removed his helmet and used it to tap left fielder Madison Nickens to celebrate his first career home run in the Terps’ 12-11 win over Richmond on Tuesday.

Center fielder Zach Jancarski said the Terps weren’t surprised when Maynard, whose start against the Spiders was his first since March 21, hit a hanging fastball over the wall in the left-center field. He’s developed a reputation for hitting home runs during batting practice.

The fifth-inning dinger brought Maryland within one after it fell behind early. Maynard went 3-for-4 in his eighth start this season, as the designated hitter in the eighth spot in the order.

“It seems like whenever his name is called he just gets it done,” Jancarski said. “He’s never going to be somebody that complains about playing time. … When he comes in it’s like ‘That dude’s a gamer and he’s getting it done.'”

Coach John Szfec wanted his best offensive players in the lineup Tuesday because Maryland’s other midweek contests have been high scoring. So, he gave Maynard, one of the Terps’ three catchers, a chance in a different role.

When catcher Justin Morris struggled defensively early this year, it seemed Maynard would emerge as Maryland’s starting catcher. Though he received regular playing time, with catcher Nick Cieri slotted into the designated hitter spot on occasion, Maynard hasn’t been called upon as much of late.

But when Maynard was in the lineup routinely, he was toward the bottom of the order. As a result, Tuesday’s start likely didn’t require much of an adjustment. He said his success Tuesday resulted from his ability to make solid contact on elevated fastballs in the strike zone.

During batting practice, Maryland conducts a drill that helps hitters recognize quality pitches. They each receive a series of fastballs and curveballs and must decide which ones are worth swinging at. The exercise seemed to benefit Maynard, who also recorded two singles and a walk against the Spiders.

“He’s a good hitter, and we all know that,” Szefc said. “…It’s hard to get sometimes nine guys in this lineup because we have more than nine good position players. You try to match it up the best you can. He gave us a great start tonight.”

The game’s tempo created a challenge, Maynard said, because unlike his teammates, he sat on the bench between at-bats. Plus, the Spiders used four different pitchers through the first five innings, giving Maynard more time between plate appearances.

But Jancarski praised Maynard’s energy in the dugout, and he often delivered when finally stepping into the batter’s box.

“I was in the bottom of the order today, so I knew I was going to get fastballs early in the count,” Maynard said. “…When you’re DH, you have to be locked in as possible, pay attention to the pitcher [and] see if you can pickup any tendencies.”

As Maryland prepares for its weekend series against Nebraska, Szefc said Maynard may get additional playing time. And if he isn’t starting, the Terps will have another productive bat on their bench.

“I wish we can play him more and maybe we may,” Szefc said. “He’s a pretty good hitter in the eight hole. Guy’s hitting .333. Not a lot of college hitters hit over .300 anymore, so he has that going for him.”