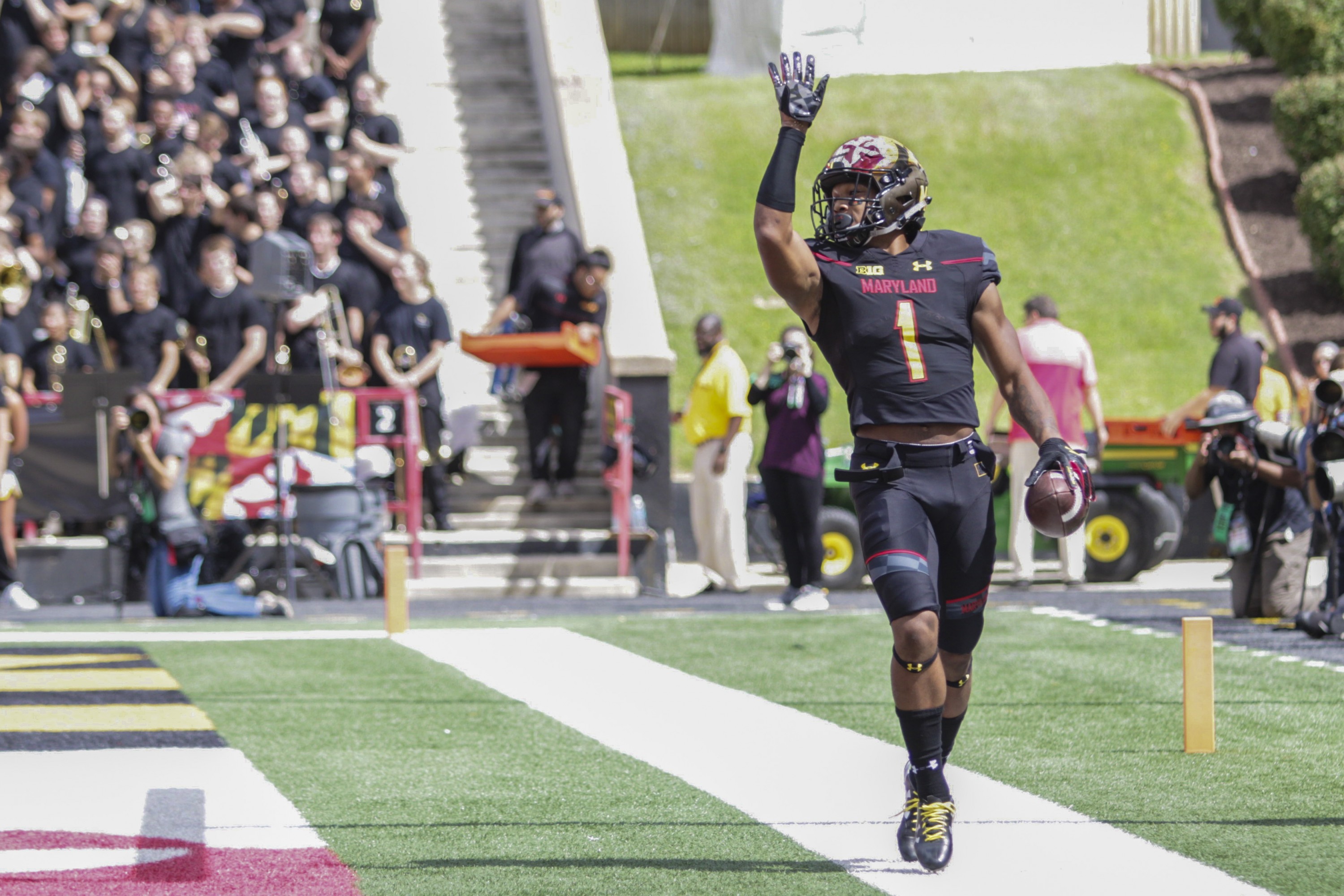 D.J. Moore laughed as he recalled the Sept. 9 play that cemented his status as a breakout candidate for the Maryland football team.

The wide receiver’s amusement didn’t stem from the absurdity of his tackle-busting 21-yard third-quarter touchdown run against Towson, which put an exclamation point on a 63-17 victory. It came because he wasn’t even supposed to get the ball.

Moore expected quarterback Kasim Hill to fake to him before handing the ball to running back Lorenzo Harrison. But Hill surprised him with a handoff, pitting him face-to-face with Bryce Carter, a 6-foot-3, 230-pound Towson defensive end, seven yards behind the line of scrimmage.

Moore stiff-armed Carter to the ground, turned upfield and broke six more tackles on the way to the end zone.

“The defensive end came up so fast I didn’t really have nothing to do but try to get him off me,” Moore said. “Everybody was like, ‘How did you do that? He’s a defensive end.’ I was like, ‘I don’t know, it just happened.'”

Moore’s touchdown underlined his ascent from lanky three-star high school prospect to Maryland’s most feared receiving threat since Stefon Diggs. Moore leads the Terps in receiving yards and touchdowns over the past three seasons.

After amassing 637 receiving yards and six touchdowns in 2016, Moore has racked up 230 yards and four scores through two contests this year. He’s caught a pass in 23 straight games, and he’ll continue to be the focal point of a revamped offense as the Terps aim for bowl eligibility.

“I’ve been around a lot of great players in my time here, but … D.J. Moore is one of the better receivers I’ve seen,” said defensive end Andrew Isaacs, who played with Diggs for two seasons.

When offensive coordinator Walt Bell was an assistant at Oklahoma State in 2009, he witnessed All-American pass catchers Dez Bryant and Justin Blackmon. Bell said Moore’s physicality and ability to gain yards after the catch reminds him of those stars.

Moore weighed about 180 pounds when he arrived in College Park. Over the past three years, he’s bulked up to 220 pounds, making him difficult to tackle in the open field.

That’s allowed him to thrive under Bell’s spread offense, which puts skill players in space through screen passes and trick plays. Moore cherishes the creativity of the scheme because it allows for moments like his memorable end-around against Towson.

“It helps me get the ball in different ways besides just down the field,” Moore said. “The short yardage, the screens is what I like the most because it gives me the opportunity to go have fun in space and show who I am.”

Still, Moore enjoys using his size to outmuscle defensive backs for deep balls. On a crucial third-and-19 in the fourth quarter of Maryland’s win over then-No. 23 Texas on Sept. 2, Moore made a leaping 40-yard grab to move the chains and set up Hill’s game-clinching touchdown run.

When Moore played at Imhotep Institute Charter High School in Philadelphia, he didn’t focus on making downfield catches. His mindset changed after coming to Maryland.

Inspired by a couple of long receptions as a freshman, Moore developed his deep ball ability. The Terps’ twice-a-week jump ball routine helped him improve.

The session begins with Maryland’s wide receivers starting down the field and holding off defensive backs from catching the ball. Then, the units swap places, and the receivers attempt to run past defensive backs for big plays. Often, Moore and fellow receivers Taivon Jacobs and Jacquille Veii reel off impressive catches.

Moore’s emergence, as well as Jacobs’ improved health and Veii’s return to College Park from Towson, has aided the signal-callers.

Moore is the No. 1 target on the much-improved receiving group, and his early-season production puts him on track for a historic campaign. The 5-foot-11 receiver is on pace to become the first Terps pass catcher to reach 1,000 yards in a season since Torrey Smith in 2010.

Though Moore’s ability to gain yards after the catch is reminiscent of Smith and Diggs, his size offers a more physical approach.

So, while he talks to the former Maryland standouts on occasion and appreciates their role in the program’s history, Moore wants to bring something new to College Park.