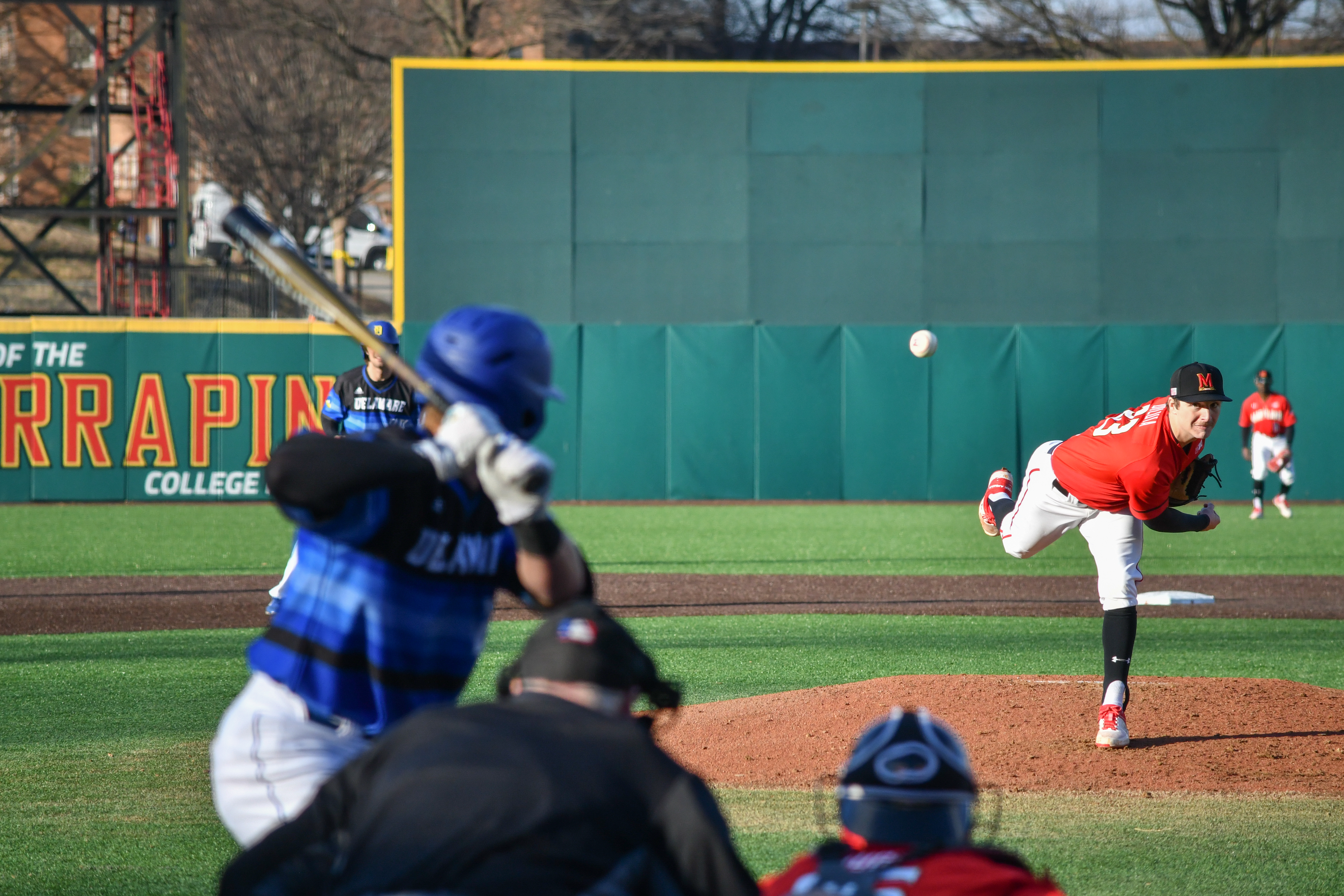 In Friday’s series opener against Stetson, Maryland baseball rode a solid offense and dominant pitching to a 7-0 victory.

The Terps scored seven runs again on Saturday, but this time the pitching couldn’t back them up.

While EJ Doskow’s go-ahead seventh-inning home run sealed a 12-7 loss for Maryland, the story of the day was sloppy pitching. The Terps (8-5) combined to issue seven walks, hit four batters and throw five wild pitches, which allowed the Hatters (6-8) to rally and take the lead.

Starter Zach Thompson had an up-and-down day for the Terps, allowing four runs (one earned) on four hits and two walks with six strikeouts. The righty needed 99 pitches to make it through 4.2 innings.

Once Thompson left the game in the fifth, the wheels came off for Maryland, as six relievers combined to give up eight runs over the remaining 3.1 frames.

First baseman Maxwell Costes continued his scorching start for the Terps, going 3-for-5 and driving in five runs. The freshman now leads the Terps with 17 hits, 15 RBI and a .354 average in 13 games.

Costes kicked off the scoring with a two-run single off Hatters left-hander Daniel Paret in the first. Stetson quickly answered in the bottom of the frame, scoring on a Costes error and a two-run double from third baseman Jon Meola to establish a 3-2 lead.

Right fielder Randy Bednar’s sacrifice fly tied the score in the third inning, but the Hatters would add three runs in the fifth to reclaim the lead, knocking out Thompson in the process.

Maryland clawed back in the seventh as Paret began to tire. The first three Terps reached base that inning before Paret was lifted for right-hander Bret Neilan.

Neilan’s first batter was center Chris Alleyne, who grounded into a fielder’s choice, plating second baseman Tommy Gardiner to cut the deficit to two. Three batters later, Costes drove a bases-clearing double to the left-center wall, putting the Terps back on top 7-6.

The lead would not last, as Stetson had another answer in the bottom of the inning. Right-hander Elliot Zoellner put two on with two outs before ceding the ball to Mark DiLuia. Doskow then drilled a three-run homer to left, putting the Hatters ahead for good.

Stetson added three more runs on a wild pitch, error and sacrifice fly in the eighth, before right-hander Vlad Nuñez shut down the Terps in the ninth.

Zoellner took the loss for the Maryland, while Neilan picked up his first win for the Hatters.

The Terps will send Trevor LaBonte to the mound for the rubber match tomorrow afternoon.