Maryland men’s basketball falls, 80-75, to Purdue for its third loss in four games 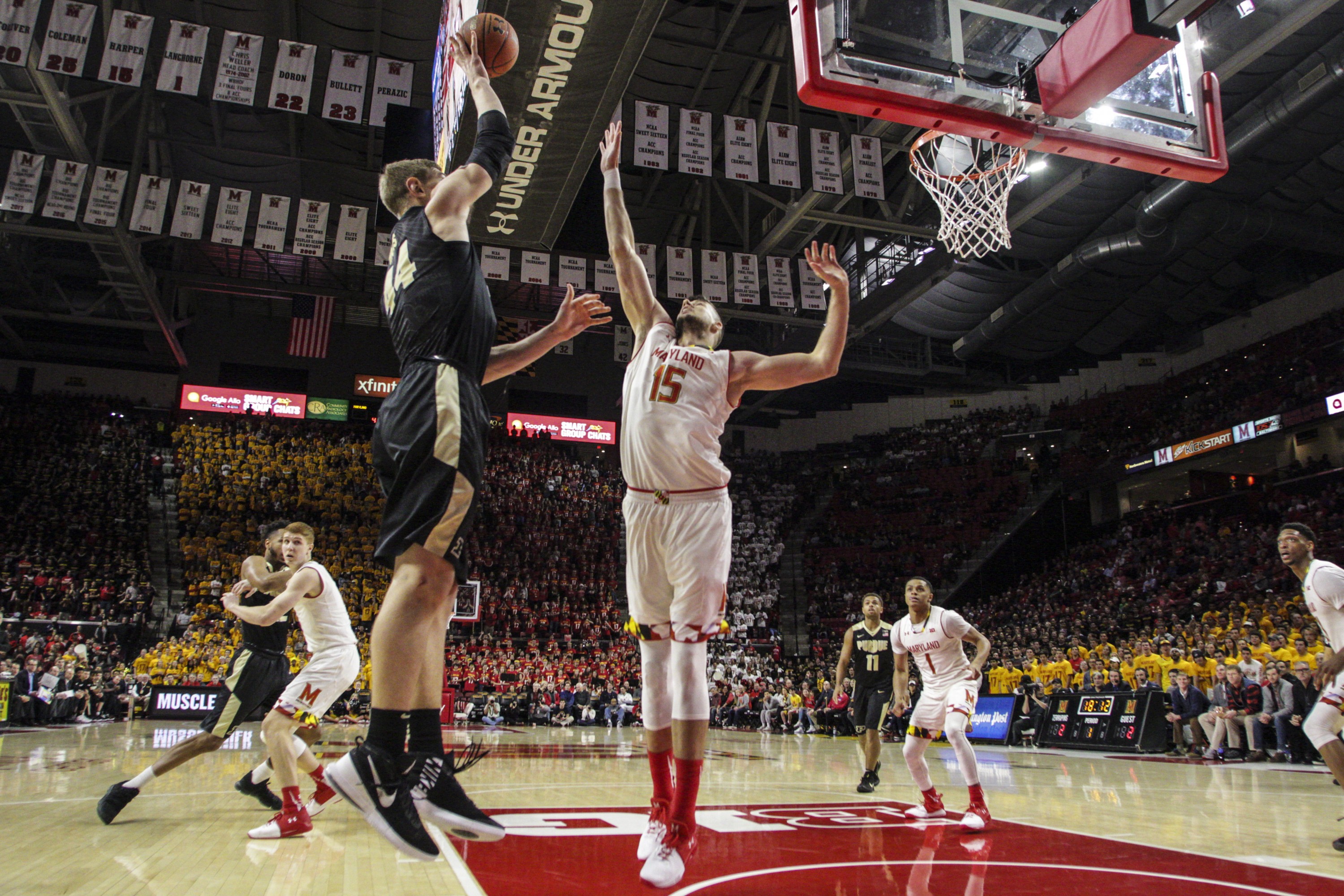 Guard Kevin Huerter expected Purdue to smother him with the Maryland men’s basketball team down three and 15 seconds to go Friday night. After all, he missed a potential game-winning 3-pointer in a loss to the Boilermakers last season.

So as coach Mark Turgeon drew a play for the sophomore, Huerter suggested the Terps instead call upon guard Jared Nickens to serve as Maryland’s hero, a role the Terps have lacked after Melo Trimble left for the NBA this past offseason.

Huerter ran toward the left corner on Maryland’s inbounds play before running back toward the opposite side of the court while Nickens used a screen for an open 3-pointer. Nickens’ attempt with 14 seconds remaining, however, fell short.

Purdue’s free throws on the next play sealed its 80-75 win at Xfinity Center in Maryland’s Big Ten opener, as the Terps stumbled to their worst nine-game start since the 2013-2014 campaign.

All three of Maryland’s losses this past week have been decided by five or fewer points.

“It’s amazing that we had a shot to tie it at the end,” Turgeon said. “I love the way we finished the half, I love the way we started the second half and I loved the way we battled. But they’re further along than we are at this point.”

Maryland (6-3, 0-1 Big Ten) trailed by eight with 58 seconds remaining before guard Anthony Cowan reeled off a personal 7-2 run to cut Purdue’s lead to three. After Cowan stole guard Carsen Edwards’ pass, the Terps had a chance to tie the game.

Instead of getting the ball to Cowan, however, Nickens, who’s shooting 57.7 percent on threes this year, couldn’t cap the last of the Terps’ many rallies that fell short.

“I told [Nickens] after the game, … ‘We’d run that play again, [and] I’d still have confidence in you to make it,'” said Huerter, who shot 4-for-7 on threes Friday. “I had no problem with the call or the execution.”

Purdue (7-2, 1-0) seemed to pull away after guard Darryl Morsell missed a 3-pointer with about seven minutes remaining. The Terps were on a 5-0 run and trailed the Boilermakers by two when Morsell missed one of his game-high 16 shots Friday.

While Purdue took an eight-point lead behind center Isaac Haas’ game-high 21 points and three others who scored in double figures, Cowan, who finished with a team-high 20 points, led the Terps back until they failed to score when it mattered most for the second straight game.

On Monday, the Terps turned the ball over on consecutive possessions in the final minute of their 72-70 loss to Syracuse.

The Terps, who played their first Big Ten game about a month earlier than usual due to an earlier conference tournament, only committed seven turnovers Friday, but they struggled down low in the early going as Haas scored with ease.

While Maryland outrebounded the Boilermakers, 16-6, on the offensive glass, the team had difficulty scoring over Purdue’s big men.

Maryland often placed two defenders on Haas, opening opportunities for Purdue on the perimeter. Guard Dakota Mathias scored 20 points on 7-for-10 shooting. The Boilermakers, who entered Friday averaging the second-most points per game in the Big Ten (88.9), shot 9-for-20 from beyond the arc.

The teams traded blows throughout the second half until Nickens’ missed shot. The Terps are still searching for their late-game option with another Big Ten game at Illinois looming Sunday.

“Sometimes it just comes down to making shots,” Huerter said. “A lot of their shots were more open than we were. … It’s not a big picture thing of why we’re losing. It’s little stuff … We got to figure it out and put a whole game together.”